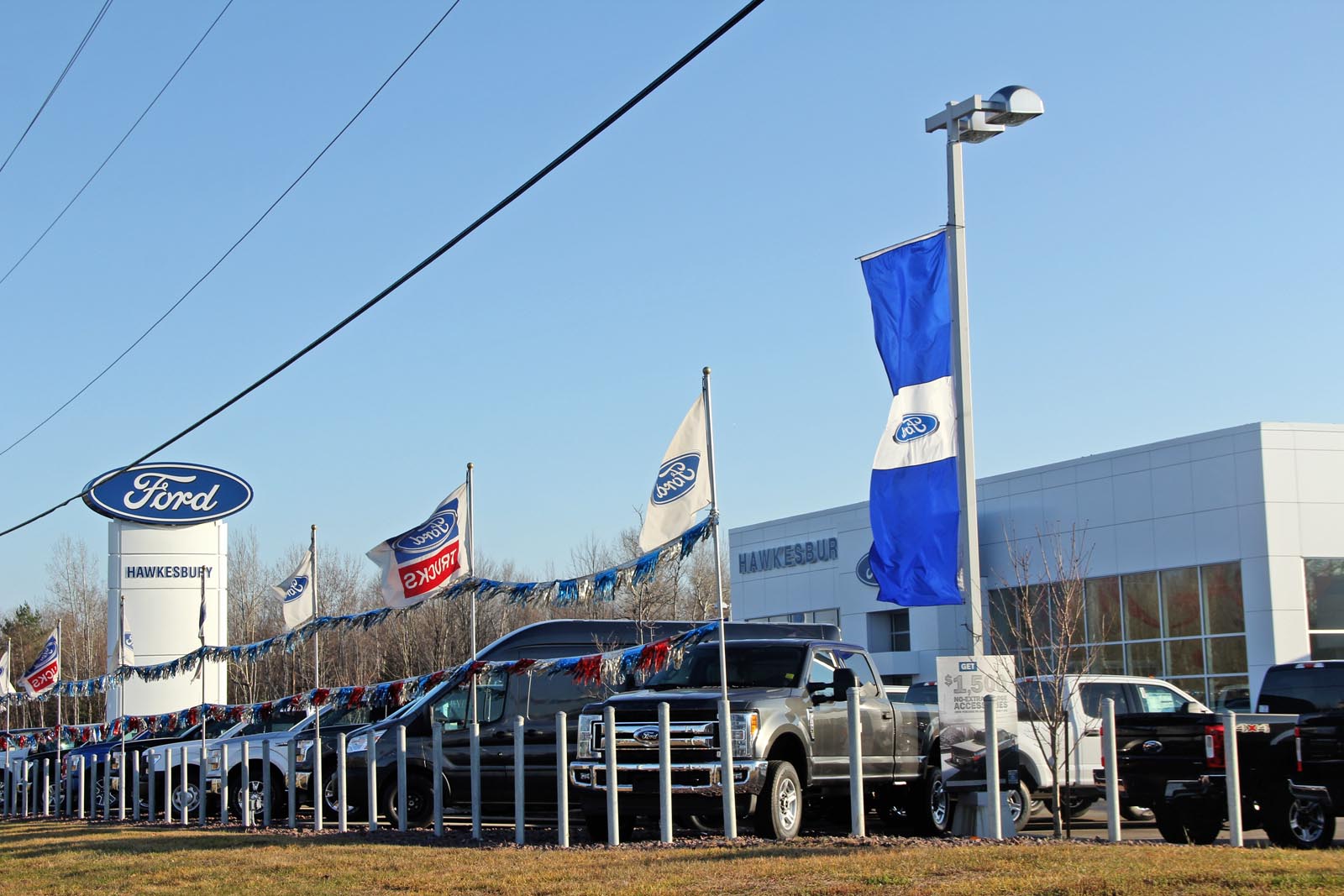 For the fourth time since 2013, Hawkesbury Ford has been targeted by thieves. (Photo: Tara Kirkpatrick)

A local car dealer is fuming following the loss of two brand-new pickup trucks that were stolen from his lot in Hawkesbury on Sunday, September 25. The bold, daytime robbery took place at Hawkesbury Ford, sometime between 2:15 p.m. and 5:45 p.m. The dealership was closed when the robbery took place.

Hawkesbury Ford owner Alan Coté told The Review that surveillance footage from that day shows an individual coming onto the lot and walking up to one of the trucks parked outside. After gaining entry to the truck, the individual drives to the back of the lot, cuts the lock off of the gate and drives away.

Then, just a little while later, the culprit returns, says Cote: “He is seen coming back later and closing the gate behind him. He walks up to a second truck, but is interrupted by a couple who are walking the lot and inspecting one of the vehicles. The suspect hides behind two trucks until the couple leave and then he steals a second truck.”

“We’re getting targeted. The F-series trucks have been the best-selling vehicle in Canada for the last seven years, which makes it a bit of a commodity,” said Coté. Coté said that he was informed by police that the trucks may have been put on a shipping container and sent to Russia, where they are in high demand.

Hawkesbury OPP spokesperson Constable Mario Gratton could not speculate on what may have happened to the trucks, as he said the investigation is ongoing. He said that police are working with other detachments and agencies to investigate this crime and to determine if there have been other similarincidents.

Police have sent the surveillance footage to specialists for analysis. Gratton said they hope to get a clearer image of the suspect, who he said is blurred in most images. Gratton could not confirm if the suspect was male or female.

This is the fourth time that Hawkesbury Ford has been targeted since 2013, when the dealership moved to its current location on County Road 17. Coté saidhis insurance premiums are getting higher and he’s tired of being a target.

Shortly after the dealership opened in 2013, Coté said that someone broke into a shipping container on the lot and stole a number of tires. In 2013, a new Ford Mustang was stolen, and in late 2015, a Ford Super Duty pickup truck was stolen. 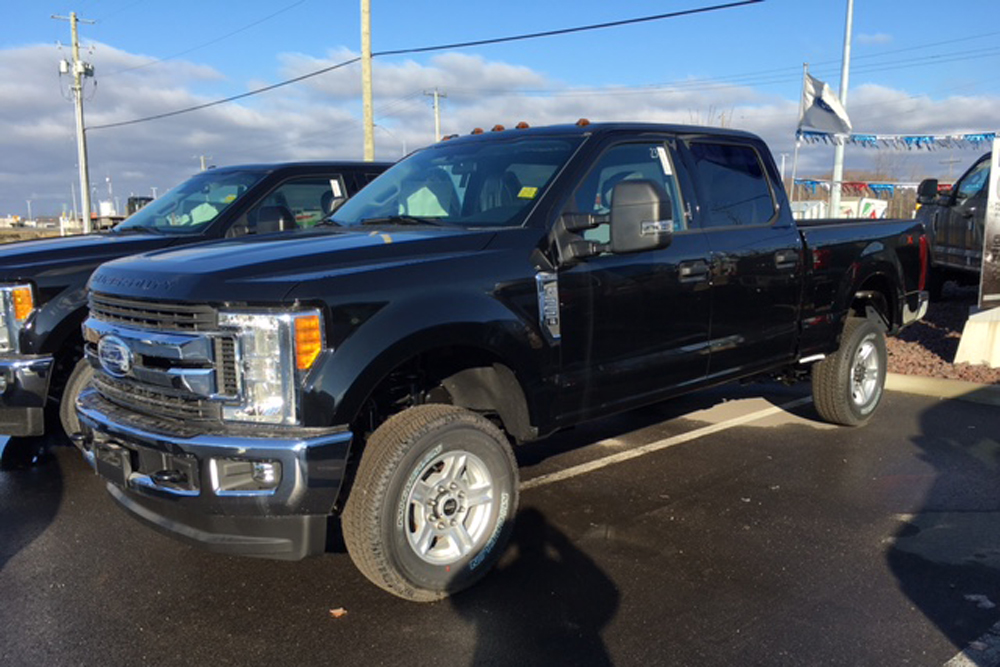 Ford isn’t the only victim.  On November 10, OPP officers responded to a theft at the Hawkesbury Honda dealership, which is located next door to Ford Hawkesbury. Police say that culprits snuck onto the lot during the night and broke into several shipping containers. They got away with thousands of dollars worth of new rims and tires. The investigation into this crime is ongoing.

That same day, a similar theft was reported at Harmony Hyundai in Rockland. Russell OPP officers report that a large number of tires were stolen from the lot. They were recovered by Ottawa Police on November 11, along with a stolen vehicle.

“On November 12, the dealer noticed damage on one of the vehicles in the lot, which indicated that someone may have tried to access the vehicle. It could potentially be the same suspect, but there is no physical evidence of such,” said Russell OPP Constable Cynthia Savard.

Motor vehicle thefts are a big problem in Canada. In 2015, Statistics Canada reported that there were 78,849 motor vehicle thefts, including 16,851 cases in Ontario. Thefts have been gradually increasing, with about 74,000 thefts reported in 2014, representing about a 1 per cent increase from the previous year.

“Despite the slight increase in the rate of motor vehicle theft between 2013 and 2014, the 2014 rate was still 61 per cent lower than ten years earlier,” says the Statistics Canada report, which depends on police-reported statistics.

The Insurance Board of Canada (IBC) says that every year auto theft and fraud costs Canadians nearly $500 million.
Since 20013, the IBC has published an annual list of the top 10 stolen vehicles in Canada. Ford trucks have consistently remained at the top of the list.

In 2015, old and large Ford trucks again dominated the list, with the top spot going to 2005, Ford F-350 pickups. Ford pickup trucks took nine of the ten spots on the list, with Ford F-350s of various years taking five spots and Ford F-250s taking an additional four. The fourth place spot on most in-demand vehicles by crooks went to the 2006, Cadillac Escalade.

Pete Karageorgos is the director of consumer and industry relations for IBC. He told The Review that these numbers are slightly skewed by the fact that most of the thefts take place in western Canada. In Ontario, he said that a high number of thefts also occur involving Honda Civics, partly because they use interchangeable parts that can be used to repair many different vehicle model years. The 2016 report, which is expected to be released in early December, is expected to include a regional breakdown of where thefts are taking place.

“Part of the challenge for our investigating services department, which works closely with Canada Border Services and local law enforcement, is to determine where the vehicles are going. We do recover some vehicles which are destined for overseas. This usually includes higher-end vehicles, sports-utility vehicles and trucks,” said Karageorgos.

With motor vehicle thefts involving new and higher-end vehicles, Karageorgos said that criminal gangs are often involved. They have a shopping list of vehicles that are “stolen to order,” said Karageorgos.

On its website, the IBC says that thieves generally target vehicles for one of four reasons. They steal them to sell abroad, in which case the vehicles are packed onto shipping containers with their vehicle identification numbers (VIN) still intact, shipped abroad and the sold for above market value. Otherwise, they are passed off to unsuspecting customers, often with new VIN numbers, or sold as parts,  stolen for the purposes of “joyriding,” or stolen to commit another crime. To this list, Karageorgos added what he referred to as “reasons of economy.”“Someone who can’t afford their payments may have their vehicle stolen and discovered destroyed so that they can claim the insurance coverage. It’s a type of insurance fraud,” said Karageorgos.