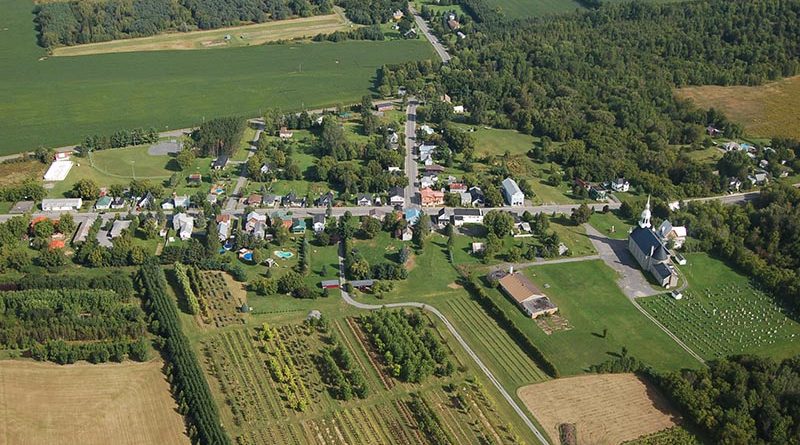 An aerial photograph of Fournier, captured in 2011.

The celebrations marking 150 years of existence of the Fournier parish will reflect Fournier’s diversity and history, says Roxanne Ryan, president of the organizing committee.

The first mass in Fournier was celebrated in a private home in 1855, and Fournier became a separate parish in 1866. The parish’s first pastor, Abbot Séraphin Philip, was appointed in 1867, 150 years ago. Construction on the stone church, St-Bernard Parish, began about 20 years later, in 1885, and it was decorated in 1896 by Edouard Meloche, whose work is still visible at the church.

It’s a Catholic parish, but Ryan said the celebrations are also about the community as a whole – everyone is welcome. “There are different churches in this little community, and it’s Irish, and English, and French,” she said. “They all co-exist, it’s one big happy family.” The celebrations come at a moment when fewer people are attending church, including Catholic churches, and Ryan said she hopes Fournier’s celebrations will “bring it up a notch,” and “people will realize that all these establishments we have in this area are little gems,” she said.

The committee’s first project was a souvenir book. This book has a different focus from the book of history compiled for Fournier’s 125-year celebration, said Ryan.

The celebrations, which are intended for everyone, not just members of the church, reflect that, she said. A soon-to-be-published souvenir book also reflects a variety of point of views. “We wanted to take a different approach from what is commonly seen in the parishes in the surrounding area, where, I call it writing in blocks – you tell the story of the church, you tell the story of the school. That has been done with our book 25 years ago. To make it a little different, we decided to write it more in a chronological order. So it’s more like reading the story of Fournier.” The story starts in 1855, detailing Fournier’s history until 2016. The second section includes information about contemporary Fournier, including community organizations and businesses. Finally, one section is dedicated to “portraits and anecdotes” about Fournier – “little quirks and whatnot” shared by residents, along with photographs.

The opening ceremony will be on January 21. A mass at 4 p.m. will be followed by a dinner and dance. Ryan said the organizers are making an effort to serve an authentic 1867 meal – for example, a vegetable soup instead of salad at the beginning of the meal. Meat and veggies will be accompanied by preserves and a loaves of homemade bread. Dessert will be a white cake with maple icing, oat cookies and molasses biscuits. The Louis Racine group will provide music for dancing. “We’re going back to our humble beginnings,” said Ryan. Tickets are on sale now, and guests are encouraged to wear period costumes.

The winter will be quiet, but people can get involved in the production of a “Fournier 150” beer, which will be made from a kind of hop popular in Fournier 100 years ago. Residents can obtain a rhizome, a piece of root, and plant it at home. It will be harvested in August and September and used by the Bedard-Brunet Family Farm for a special batch of beer. The beer will be available for the closing ceremonies in November, 2017.

There will be a big celebration for St-Jean Baptiste day on June 25, beginning with a 10 a.m. mass in Fournier park. A “food court” will be open until 7 p.m., and a parade will begin at 1 p.m. Music and entertainment will follow, along with guided visits of the St-Bernard church, and an exposition of antique cars and agricultural machinery.

An ecumenical, or interdenominational, celebration is planned for August 13, at 10 a.m. at Fournier Park. Lunch and games will follow, and an exhibition of materials used for producing hops is planned. “Anybody who might have old stuff stashed in a barn, we want to hear about it,” said Ryan, who says for about 60 years, many farmers near Fournier grew hops. “It’s very much part of Fournier’s history,” she said.

On September 23, a hunter’s blessing will be performed, followed by a dinner, at the Fournier community hall.

Not all of the details have been ironed out for the closing ceremonies, set to happen on November 25, 2017, but the event will include a mass, dinner and a dance at the St-Bernardin Community Hall.

Finally, Ryan said families are welcome to host gatherings in 2017. Those interested can hold a family mass for $15.

Roy said donations and volunteers are welcome. To get involved in the celebrations or if you have questions, email: [email protected] and it will be directed to the appropriate person. The committee also has a Facebook page: Fournier 150.