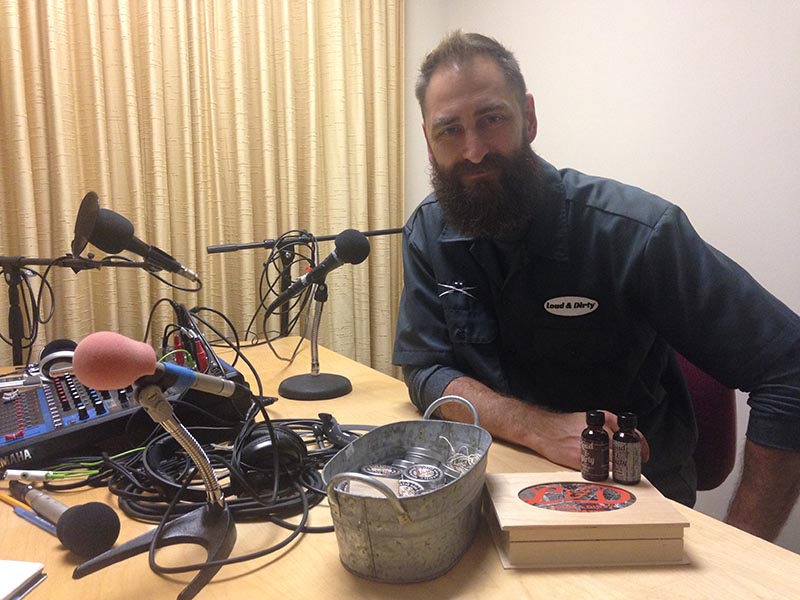 Les Hatz, owner of Erupshun Industries and Loud and Dirty, at The Review offices.

Two local businesses have a new product which could make every local beard smell good, even if its owner is a bit shy to shop in the cosmetics aisle.

Les Hatz, owner of Erupshun Industries, recently partnered with Tara MacWhirter of Garden Path Soaps on a line of beard-care products, including beard butter (or balm) and beard oil.

Hatz has worn a beard for a large part of his adult life. “I’ve always been fairly slim, so I find the beard adds a little fullness to my face,” he said. He also has sensitive skin and doesn’t like shaving every day. “It just doesn’t feel very good,” he says. And it’s a good year for a beard: facial hair has been in style lately, and Hatz says he figures it’s almost at its peak.

That creates an opportunity for beard-care products. “If you’re going to cover your face with hair, you need to maintain it,” said Hatz, who says until he started developing his products, he had experimented with other beard-care products, but mostly didn’t use anything at all. “As you hair gets longer and longer it dries out, it doesn’t look healthy anymore,” he says. Now, he uses products regularly and says his face isn’t as itchy. Plus, it’s pleasant to use, he says. “It feels good, it smells good, it looks good,” he said.

He says “Loud and Dirty” is special because it’s made locally, and also because its on-brand for Erupshun Industries, which is aimed at “guys that are into motors and cars and and bikes,” says Hatz. “There’s an irony….we’re selling a cosmetic product that’s making you smell better and cleaner, but it’s called ‘Loud and Dirty.'” That could attract customers who might not usually buy very many soaps or cosmetics, he said. It’s also a departure for Garden Path Soap, where product packaging usually features garden or butterfly designs.

So far, Hatz says feedback has been “super positive,” both from men as well as women whose significant others are bearded.

The products are made at Garden Path Soap, with ingredients including Argan and Jojoba oils, plus grapeseed oil and vitamin E. Hatz says many of his sales are done on Facebook, but a website will be launching in November and he has plans to have the products sold at retail locations as well.