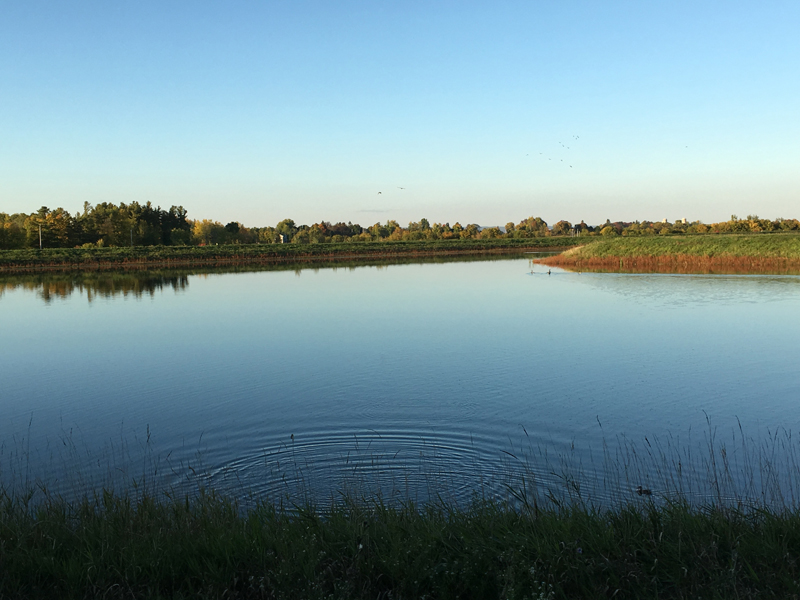 In 2017, Vankleek Hill will begin the process of replacing its wastewater treatment facility and decommissioning the existing lagoons. The facility was constructed in the 1970s and is being replaced due to age. (Photo: Tara Kirkpatrick)

If you flush a toilet, or wash your hands in Vankleek Hill, chances are that the effluent is ending up in the Vankleek Hill Lagoons, which are located on Newton Road. Next year, the Vankleek Hill Wastewater Treatment Services, which includes the lagoons, will be undergoing an $8 million upgrade.

The project includes replacement of the raw sewage pumping station, upgrades to headworks, construction of a moving bed biological reactor, a tertiary filter, UV channels for disinfection, and an aerobic digester. The project also includes decommissioning the former lagoons. The lagoons are comprised of five cells. The cells resemble an interconnected network of small lakes, which help to clean the water after it has been filtered, screened and sent through a rotating biological film system that consumes the bacteria.

Most of the waste is removed from the water before it hits the lagoons, which are broken into settling ponds, polishing ponds and monitoring wells.

The water in the ponds is regularly tested for a number of variables, including the presence of raw effluent and phosphorus. Twice each year, once in the spring and a second time in the fall, water is released from the ponds into the Little Rideau Creek. It flows downstream and eventually ends up in the Ottawa River. This process is authorized and monitored by the Ontario Ministry of the Environment and Climate Change.

After nearly 50 years of service, Champlain Township Public Works Director James McMahon says the wastewater treatment facility is in bad shape. The facility was constructed during the early 1970s to serve the population of Vankleek Hill.

It is currently operating at between 40 and 50 per cent of its intended capacity, meaning that the wastewater facility could serve a population twice the size of the current demographic. The new facility will be similar in appearance to the old one and will also use an upgraded lagoon system.

“The main reason for the upgrade is age. It’s surpassed its lifespan on a lot of the equipment,” said McMahon. Though he could not confirm reports of leaks in the system, but McMahon did say there is evidence water is leaking into the cells from the groundwater. He says this can be problematic, because it changes the treatment process and could impact water quality in the treatment plant.

“We know we have non-compliance issues (with the Ministry of Environment) and we know that groundwater is probably coming in,” said McMahon.

Choosing a design for the new facility is still in the preliminary stages, but McMahon said that early estimates suggest the project will cost around $8.8 million. The provincial and federal government will each fund 33 per cent of the project, representing more than $2.9 million each. Money from the federal government will come from the “New Building Canada Fund: Small Communities Fund,” which is designed to help renew public infrastructures in Ontario communities with populations less than 100,000 people.

The project was approved by the federal government on July 22, 2015 and is slated to be completed by March 31, 2018. The project will go to tender for bids next spring.

Pumping Station One, which is located near the train tracks by Newton Road will also be upgraded during this process. This pumping station is used to pump most of the waste from town to the lagoons and McMahon said it will be replaced due to age and as a preventive measure.