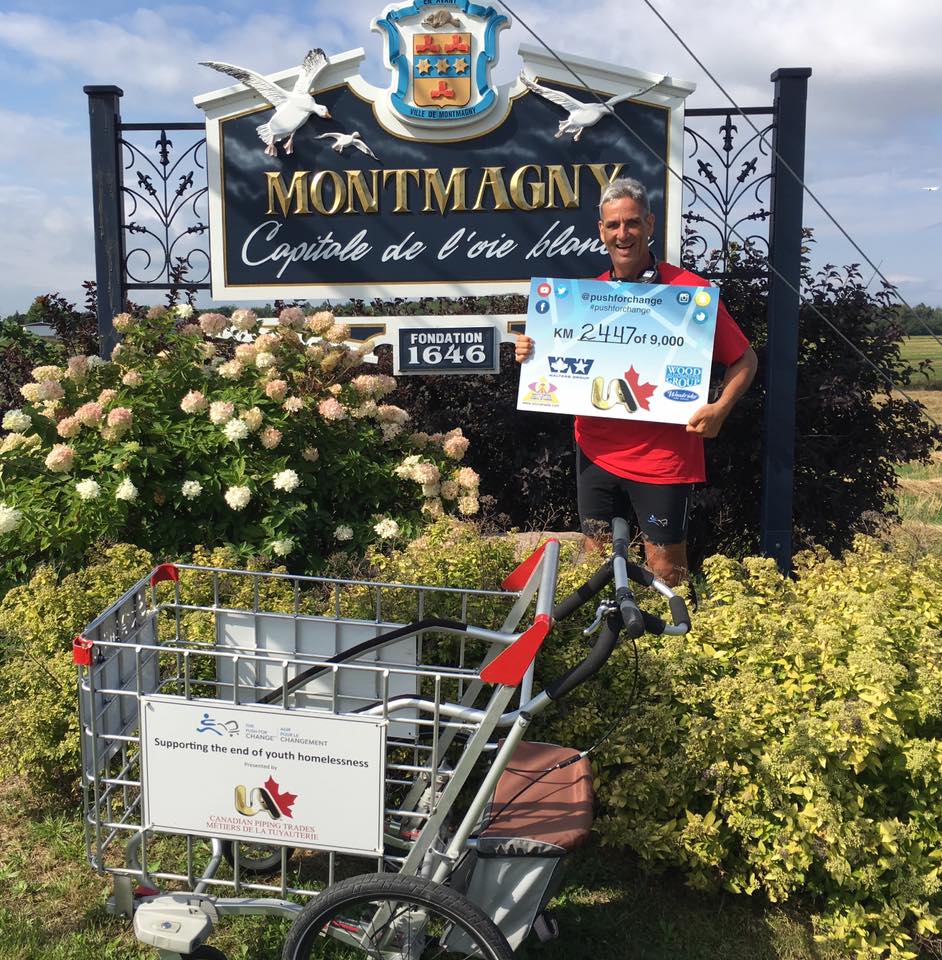 Joe Roberts, who is walking across Canada in order to raise money to combat youth homelessness, makes a stop in Montmagny, Quebec (Facebook photo).

Joe Roberts is a successful businessman who used to live on the streets. He knows what it’s like to be homeless and he is on a mission to raise funds so that homeless youth can escape the streets and begin a different life.

Since early May, Roberts has been pushing a shopping cart more than 2,591 kilometres across Canada. It’s part of his mission to travel more than 9,000 kilometres by September 30, 2017. Along his route, Roberts is raising awareness and funds to end youth homelessness.

On September 22, beginning at 11 a.m., local students, representatives of the Ontario Provincial Police (OPP), and “special guest” Walter Gretzky will walk with Roberts from Confederation Park, in Hawkesbury to the Robert Hartley Sports Complex. There will be a ceremony beginning at 12:15 p.m. at the sports complex, and later, beginning at 5 p.m., a silent auction including sports memorabilia, entertainment and a cash bar at the Royal Canadian Legion in Hawkesbury (152 Nelson Street East).

On Sunday, September 30, Russell County Detachment of the OPP will be hosting a barbeque for Roberts at the Jean-Marc Lalonde Arena, located at 1450 Avenue du Parc, in Rockland. The barbeque runs from 10 a.m. until 2 p.m., with proceeds benefitting the “Upstream Project,” of “Push for Change,” which aims to prevent youth homelessness by making sure at-risk young people have support in schools.

“The OPP partnership with the Push for Change is a perfect opportunity to raise awareness about youth homelessness and some of the related risks factors – mental health issues, addiction and difficulties at home or at school,” said OPP Spokesperson Cynthia Savard, in a written statement.

Housing advocates estimate that there are approximately 65,000 young people across Canada who are homeless or living at homeless shelters. Thousands more are at risk each year.