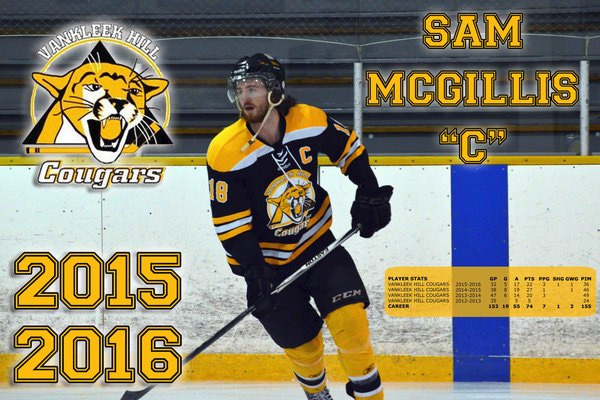 The Vankleek Hill Cougars have been busy this summer getting prepared for the upcoming season.  The season will be filled with high expectations as the team is celebrating its 25th anniversary.  There are special activities planned throughout the season and the team hopes that fans will come out to celebrate.

The Cougars’ staff have indicated that this year’s roster should consist, like every year, of mostly local players.  The team will be counting heavily on returning players such as goalie, Anthony Vassall, who is in his last year as an overage.  The defense core will be anchored by overage, Sam Fournier and Anaïck Besner. As for the offence, the team will rely on last year’s top scorer Riley Sauvé, Tyler Dopelhamer, Tyler Druce and Max Emond.  The Cougars also have local player Ryan Allen making a return to the team after playing two seasons with the Alexandria Glens.

The Cougars will them have their home opener on October 1st, 2016.  A tailgate party will be organized for the home opener.  This will include BBQ, music, Beer and other surprises.  Hope to see many fans out to this and other events.