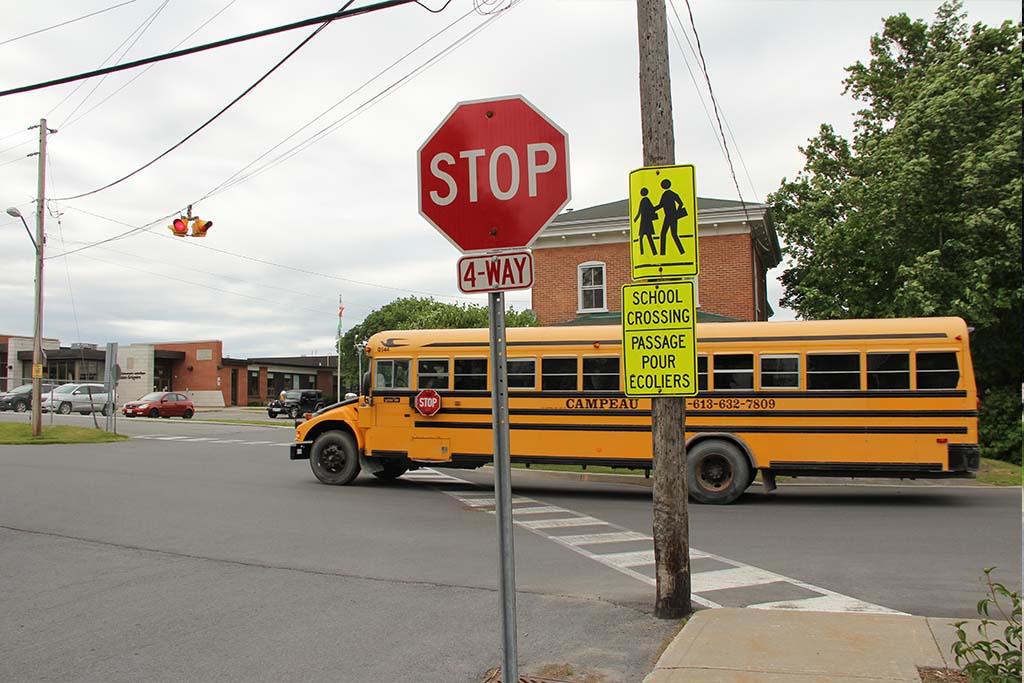 Vankleek Hill crossing guard Karen Whalen was wearing a bright orange vest and she was holding a stop sign a few weeks ago when she was nearly hit by a car. It passed a little too close for comfort and she said the car appeared to be moving fast. Whalen was helping a small child cross Main Street, near Home Avenue, in Vankleek Hill, at the time of the incident.

She blames inadequate signage and paint for making the crosswalk hard for drivers to see.

“Because of the lack of markings, I’ve even seen a police officer go through the crosswalk when a young lad was waiting to cross,” said Whalen.

When The Review posed a question on Facebook asking if residents thought the crosswalk should be painted and the speed lowered, the response was overwhelmingly favourable. A few local residents were also surprised to learn that Vankleek Hill has a pedestrian crossing.

“I realize this is a highway, but I think the Main Street commercial section really should be slowed down, not just at the school crossing, but from Lalande’s store over to the lights. In addition, the school crossing should be respected and repainted so it is very visible,” said Vankleek Hill resident Pat Deacon.

The United Counties of Prescott-Russell (UCPR) are in charge of maintaining pedestrian crossing facilities, on provincial roads in its territory.

According to UCPR Public Works Engineer Jérémie Bouchard, there are 14 such crossings in Prescott-Russell. This summer they are all being reviewed to determine if they are justified, and if they are safe.

He admits that it’s been a very long time since the crosswalk near Main Street and Home Avenue, in Vankleek Hill has been painted.

The Ontario Traffic Manual (OTM) provides information and guidance for transportation practitioners, cities and municipalities across the province. It defines how traffic signals should be used and it suggests that pedestrian crosswalks may actually put pedestrians in danger.

The OTM further suggests in section 3.2.7 that the uncontrolled crossing can “create a false sense of security on the part of pedestrians, particularly children, who may enter the crossing expecting that approaching drivers will see them and stop.”

Four times each day Whalen helps children cross Main Street. When she is on duty, she says that she’s confident the children will cross safely, but she questions how they will fare when she’s not there and no one is ensuring that motorists stop.

“I think kids need to be taught to properly cross the street. I think it needs to be taught in school,” said Whalen.

Bouchard said that the evaluation of the pedestrian crossings is intended to help council decide whether to paint, or remove some crossings.

“People tell us to just paint the lines, but it’s not recommended to do that, because the cars have no need to stop. They have the authority to go right through the crosswalks. The cars have the right of way under the Highway Traffic Code. What you see at certain spots is just a recommendation to drivers to allow people to cross. It’s a courtesy crossing,” said Bouchard.

In order to have an uncontrolled crossing, the OTM says you need to have a minimum of 276 people crossing the street within an eight-hour period. In rural areas, this can pose challenges.

As part of the evaluations, Bouchard and his team will be collecting statistics on how many people use the crosswalks. He said that they chose to do this during the summer, when there is the highest concentration of foot traffic. At this point, he said it’s too early to tell if any of the crossings will meet the minimum standard.

“We could have more signs, more paint and more visibility, but obviously, this is highly discouraged because there is a likelihood of conflict between pedestrians and vehicles, which have the right of way,” said Bouchard.

This doesn’t mean that the UCPR can’t go against the OTMs recommendation and paint the lines, but it does mean that painting the lines might not help, unless the Highway Traffic Code is rewritten to prioritize pedestrians.

“With the current system, I think it’s (the crosswalks) been ignored in the past few years. No line painting has been done in a long time. The counties have basically stated that they are not promoting uncontrolled crossings, unless it is a legal crossing with a street light. It had kind of been ignored in the past and is under evaluation now,” said Bouchard.

He said that on the recommendation of Champlain Township Council, evaluators are also looking at whether there is a need for a second uncontrolled crossing on Main Street, Vankleek Hill, near Derby Street.

“We will look to see if it warrants an actual crossing and will make our recommendations to council,” said Bouchard. He said that the evaluation, which includes counting the number of people using these crossings, is expected to be completed by the end of summer.

Cities aren’t without options when it comes to taking control of their crosswalks and forcing drivers to stop.

Intersection pedestrian signals are typically used in areas with high pedestrian traffic to indicate when a pedestrian is crossing the street. With this system, a traffic light is installed at a crossing. The signal light remains green, until activated by a button. Bouchard said that these lights typically cost around $50,000 to install.

Bouchard said that these courtesy crossings are currently not regulated, but they are being employed by some municipalities and he said that they appear to be working.

“Our perspective is that we need to follow the guidelines, and we do. Until the Highway Code changes, our hands are tied. We will look at the 14 crossings and see what we can do,” said Bouchard.