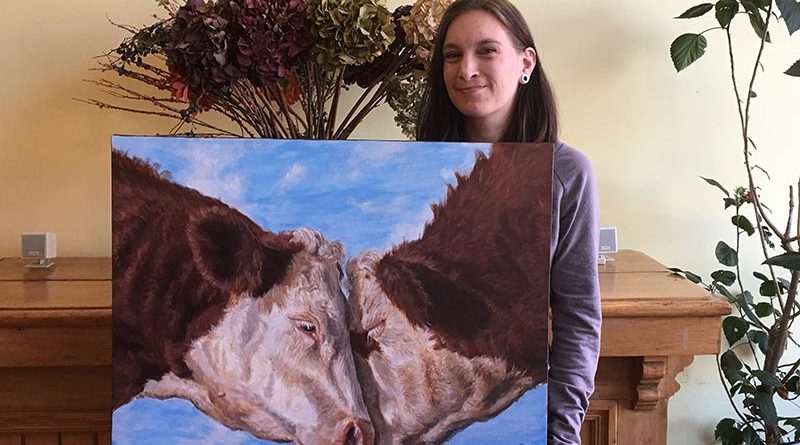 Salvation and second chances are recurrent themes in the art currently on display at The Review offices in Vankleek Hill. The exhibit is on loan from Grenville-sur-la-Rouge artist Erin Emily Robinson, whose current work focuses heavily on rescue animals.

One of her newest paintings features a former racehorse, which now lives at Refuge RR, in Alexandria.

“I named this painting “Disposable”, because racehorses like this one are not always kept around long after they stop winning races,” said Robinson.

Animal portraits are a relatively new interest for Robinson. She said that she was drawn to rescue animals because she felt that they had a story to tell.

Portraits are her primary area of interest. Robinson says that she is not always drawn to a beautiful face, but to one which is filled with character and life.

“When I study a model’s face and body, it’s as if I can see who they are and I try to express that in my work,” said Robinson. She says that the subtleties in our micro-expressions and how we hold ourselves says a lot about how we experience emotions.

She reflects this in her powerful portraiture which stares off the canvas with purpose. In one set of eyes you can see defiance. In another, she might capture the essence of peace and calm. She draws more than just faces. She draws emotion.

Robinson started painting when she was very young and she hasn’t stopped since. She attended the Sadie Bronfman School of Fine Arts and also studied at Concordia University. She has been working in her field for the past 15 years and she says that she is inspired by everything she sees in her surroundings.

“We are complex beings. The relationship between how we look and who we are internally, is fascinating to me. Specific themes I have explored in my work include gender identity and expression; sexuality; and family history through old photographs,” said Robinson.

Like life, art is transformative. Robinson says she likes to experiment with art by working in a variety of mediums, including acrylics, water colours, graphite and paper.

“I primarily work in acrylics at the moment, because it’s the medium in which I feel like I can best express myself,” said Robinson.

Erin Emily Robinson’s art will be on display at The Review offices, located at 76 Main Street, East, in Vankleek Hill, until the end of June. 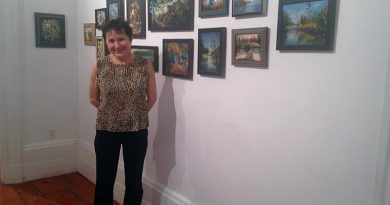 This summer at Arbor Gallery, local artists are front and centre