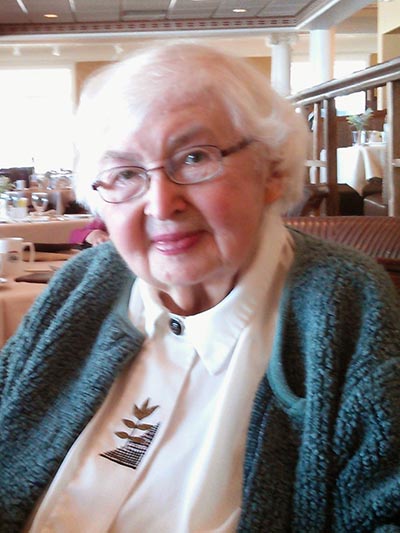 Doreen E. (nee Maxwell) Hotchkiss, 90, died peacefully on Sunday, April 8, 2018 in Ogden, Utah. Born May 12, 1927, in Vankleek Hill, she spent a peripatetic childhood hopscotching around the globe due to her engineer father’s career. This rich experience gave her a lifelong sense of wonder about the world coupled with a love of learning.

Doreen attended Queen’s University in Kingston, where she earned Bachelor’s and Master’s degrees. Awarded the prestigious Marty Memorial Scholarship from Queen’s, she continued her education at University of St. Andrews, beginning work which culminated in a PhD from McGill University. While doing postdoctoral studies at the University of Sydney in  Australia, she met her future husband, Arland Hotchkiss, an American botanist and the love of her life. She moved to Louisville, KY, as a new bride, resident alien and committed Canadian and raised four children. After the children grew up, she taught science-related courses at St. Francis School, Indiana University South-East and Jefferson Community College Southwest, and was named a Teacher of the Year in Kentucky.

In 1995, she returned to Canada and lived in L’Orignal for several years before moving back to the US to be with family. Her many interests included writing children’s books, writing and editing a genetics textbook, and researching family and church history. She is survived by her children, Arland, Jr. (Julia Goplerud), Anne Anderson (Dale), John (Mindy), and Mary (Mark Powers), and grandchildren Brett, Samuel, Colin, Dylan, Shannon, Ian and Juna. She was preceded in death by her husband. Donations in her memory may be sent to Monarch Watch at http://kuendowment,org/monarch. Contributions can also be sent to the Marty Memorial Scholarship Fund at Queen’s University, Kingston, ON in memory of Dr. Doreen Maxwell Hotchkiss. Alumni of Queen’s can give directly at www.givetoqueens.ca/doreenhotchkiss. Non-Queen’s alumni may send checks to the US Foundation for Queen’s University at Kingston, 5614 Connecticut Ave NW, Box 130, Washington DC 20015.