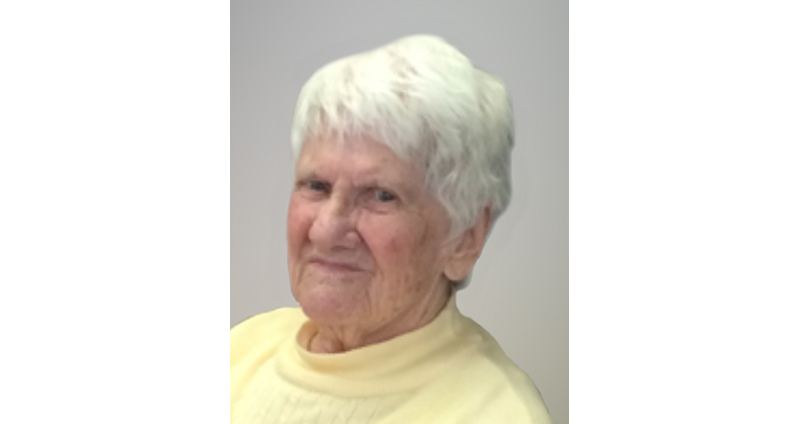 Mrs. Jeannette Duval (nee Miron) from Vankleek Hill passed away on Saturday, December 22, 2018 at the age of 97. She was the beloved wife of the late Ernest Duval; the daughter of the late Napoléon Miron and of the late Dalvina ‘Aurore’ Bérubé; the loving mother of the late Pierrette (Ronald Sauriol), the late Jean-Guy, the late Marcel (Cécile Miner), the late Nicole (Paul Paquette), Colette, Suzanne (late Rae Barton), Danielle (Brent Conway) and Francine (Paul Martel); the adored grandmother of 15 grandchildren and 11 great- grandchildren; the dear sister of Lucille (late Aimé Boies), Jeannine (late Robert Gazaille), Thérèse (late Elwood Banks) and Madeleine (late Liguori Blais). She was predeceased by four brothers, Arthur, Jean-Paul (late Eva), Fernand (late Gertrude) and Lucien (Jeanne D’Arc). She is survived by many cousins, nephews, nieces and friends. The family wishes to thank the staff of the Prescott and Russell Residence for the great care given to Jeannette. Friends may call at Berthiaume Family Funeral Home 103 High, Vankleek Hill, Ontario (613) 678-3000, Wednesday, January 2, 2019 from 6 p.m. to 9 p.m., Thursday, January 3, 2019 from 9 a.m. A funeral service will be held at St Grégoire-de-Nazianze’s Parish in Vankleek Hill on Thursday, January 3, 2019 at 11 a.m. For those who wish, donations to the Alzheimer Society, P.O. Box 1852, Cornwall, Ontario, K6H 6N6 would be appreciated. Condolences may be conveyed by fax at (613) 632-1065 or visit our Web Site www.salonfuneraireberthiaume.com