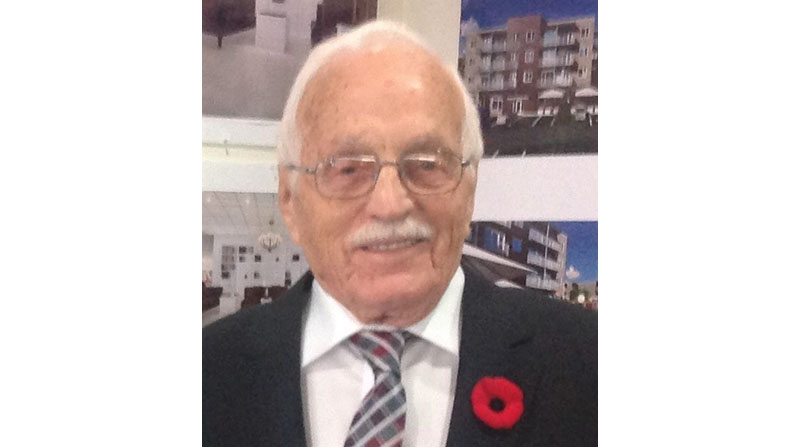 It is with great sorrow that we announce the passing of Lorne Boyd, husband, father, grandfather and great-grandfather. Lorne passed away peacefully at Parisien Manor in Cornwall, ON in his 103rd year. He will be sadly missed by his sons, Malcolm (Judy) of Edmonton, AB and David of Sooke, BC, his 6 grandchildren and 5 great-grandchildren, as well as his brother Frank (Diane). He is predeceased by his wife of 71 years, Gladys (nee McMeekin), his parents, Norman and Milda Boyd, his son, Larry, his daughter, Linda (the late Wayne Suave), his sisters, Hazel (the late Adam Walker) and Lila (the late Walter Murdoch). Lorne was a long-time employee of the aircraft industry, retiring from Air Canada in 1979. As a reservist in WWII Lorne was honoured to lay a wreath at the Hawkesbury Cenotaph on Nov. 11, 2018, (the 100th anniversary of the end of WWI and his 100th birthday). Throughout the years he enjoyed travelling to exotic places, trips to see his sons and families in Alberta and British Columbia, and numerous outings along the St. Lawrence in the cabin cruiser with Gladys. Lorne was a long-time member of the Hawkesbury Legion and The Royal Edward Lodge, as well as curling well into his late 80’s. Funeral arrangements entrusted to Berthiaume Family Funeral Home, 416 McGill Street, Hawkesbury, Ontario (877) 632-8511. Because of the restrictions caused by COVID-19, a service will take place virtually on Thursday, May 6th, 2021 at 2 p.m. via this link: https://funeraweb.tv/en/diffusions/28980 A memorial service will take place at a later date. Condolences may be conveyed via our Web Site www.salonfuneraireberthiaume.com