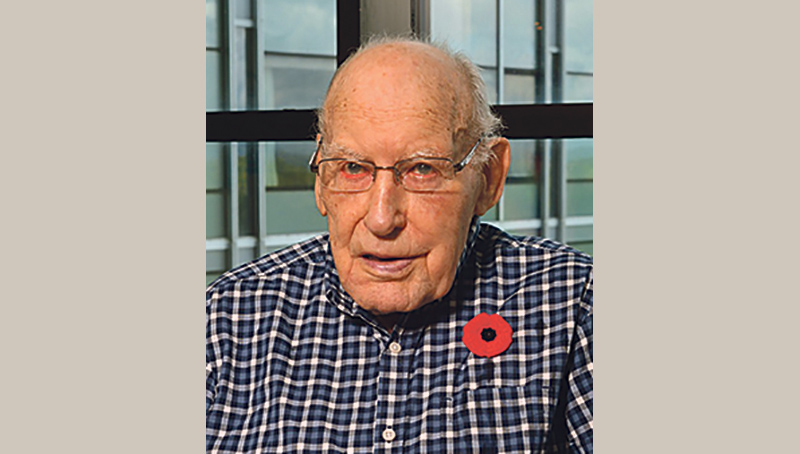 After a courageous battle with Covid-19, our father Jim passed away at Ste. Anne’s Veterans’ Hospital at age 98. He is predeceased by his wife Mary Gagan. He leaves behind: Bob, Catherine (Bob), Grant (Brenda), Ann. (predeceased by infant son David). Predeceased by his parents: Garnet and Margaret (nee Smith) Bennett. Predeceased by his siblings: Freda (Ross), Arthur (Olive), Janet (Wes), Harry (Jean), Garn (Dawn), Lydia. In addition to being a wonderful father, grandfather, great grandfather, son, brother, uncle and Friend. Some of his achievements, beginning as a young man, was serving in the Black Watch, then on to Nortel (Northern Electric) as a long-time, dedicated employee-management for over 40 years. Dad always continued with community involvement, some of which was a founding member of the East End Boys Club Hockey Association, Optimist Football Program, also as an elected councillor for his hometown, municipality of Arundel. In his retirement years, Dad remained an avid outdoorsman, a great gardener, and was always willing and able to hit the road to drive family, friends, neighbours to and from medical appointments, social outings/gatherings/events-whether it be near or far. Dependable and always willing to lend a helping hand. Our Dad loved sports his entire life-especially his Canadiens hockey games, was always up to date on sports stats-thanks to his study of the back page of the Montreal Gazette. He also provided daily care and attention to his beloved horses, dogs, cats well into his 90’s years of age-always being active was his way. Cremation has taken place and a private service for interment, will take place at the Arundel Cemetery, at a later date. A Celebration of Life will be held at the Canadian Legion-Arundel Branch at a later date. The family would like to thank Dr. Lilia Lavallee, Nurse Diane Boyer and all the staff of the 12th floor, at Ste. Anne’s Veterans’ Hospital for their kind care and attention they provided Dad as a Resident this past year. In lieu of flowers, please consider a donation to the Montreal Children’s Hospital or an Animal Shelter of your choice.