End of an era for Hawkesbury’s Maitre Charle menswear store 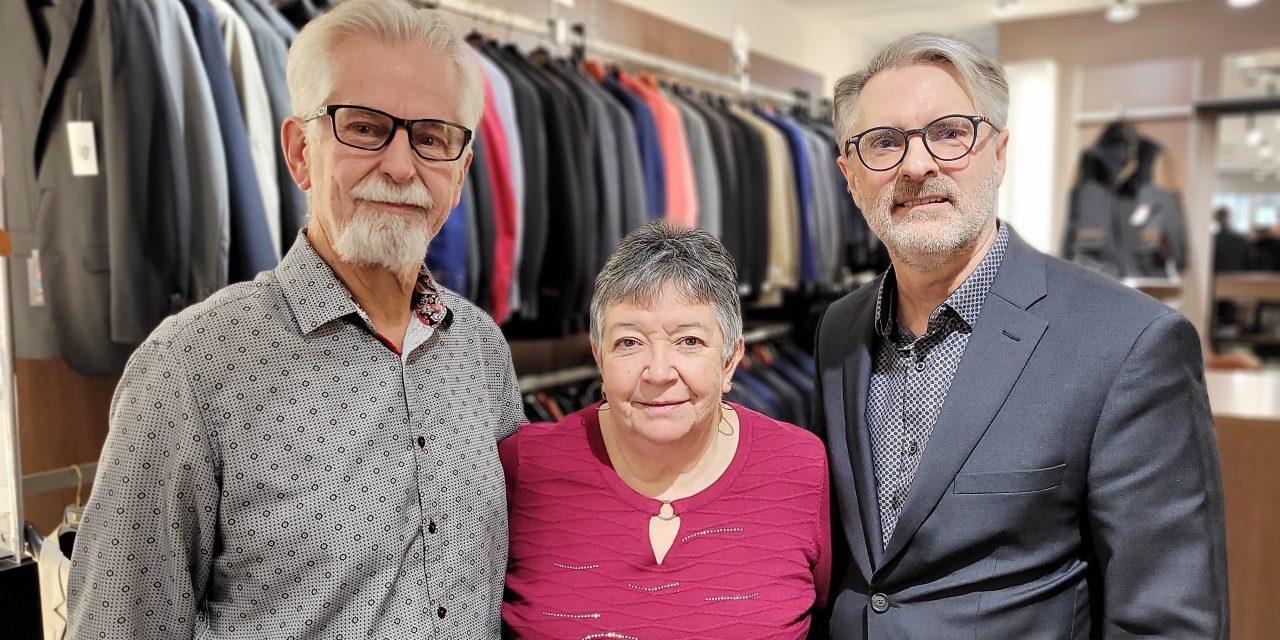 When Maitre Charle closes its doors on February 25, it will be the end of an era of menswear stores in Hawkesbury.

Opened in 1977 by owner Denis Charlebois in the what was then the newly-built Hawkesbury Mall on Spence Street, Maitre Charle has literally dressed thousands of men for graduations, weddings, job interviews and other important life events. When opened, it was one of several stores in the town which offered menswear, including Ben Younger, K&W Assaly, Kastner’s, and Boutique Monsieur.

Charlebois says he was inspired to go into the menswear business by Ben Younger, who had a large store on main street in Hawkesbury for decades.

“Ben was a nice guy.” Charlebois recalls. “When I was a kid, I used to come in and buy clothing there with my father.”

Younger not only had his retail store, but he would go out on the road to promote his clothing.

“He would sell door-to-door – that’s how he started,” Charlebois says, of being inspired by Younger’s enthusiasm for the business. “I always thought (owning a menswear store) was something I would like to do.”

For several years, Maitre Charle and Ben Younger were friendly competitors. Then, in the mid 1980s, Charlebois approached his elder competitor with an idea.

“One day I came in and asked him if he would be interested in selling to me,” he remembers. “He was surprised.”

In 1986 he purchased the Ben Younger store at the current location, moving Maitre Charle into the much larger Ben Younger location on Hawkesbury’s Main Street, where it is still located. The new location also added a ladies section and jeans store in what had been the old Jeansville location in the same building. The store at the mall, renamed Options Pour Lui, remained open for about a year before closing.

With the purchase came an unexpected bonus, as François Joanisse, who had begun working for Ben Younger in 1983, joined the staff at Maitre Charle, where he serves as the store’s manager to this day. Gabrielle Cardinal, the store’s accountant, also joined Maitre Charle in 1986 when it moved to the new location on Main Street.

Since its inception, the focus of Maitre Charle has been service. Many of the store’s customers have been shopping there for decades – some since the store first opened in 1977.

“The main reason we’ve had success is the level of service we’ve offered for 45 years,” Joanisse emphasizes. “The customers are our family. We know their sizes, and when they come in we have fun.”

The menswear business has seen remarkable changes over the years, Joanisse says.

“It started with casual Friday,” he recalls. “Things became a lot less formal.”

“A casual wedding will make you sell stuff,” he explains. “If it’s too formal, they rent.”

As rentals for weddings and suit sales declined, Maitre Charle adapted, downsizing to a smaller portion of the Main Street building when Charlebois brought in an Intersport franchise in the early 2000s. That franchise, whose named has changed to Sports Experts, is now located along with other big-box retailers in the newer development on County Road 17 in Hawkesbury.

“We saw it coming,” Joanisse says, of changes to the industry. “The move to the smaller store allowed us to keep less inventory and it was a good thing to do.”

Maitre Charle continues to be a very successful business, with 2022 one of its best years ever. But the writing was always on the wall that the store could not stay open forever. Charlebois is already enjoying retirement and Joanisse is ready to do the same.

“It’s time for me to retire – that’s the only reason why the store is closing,” says Joanisse, 60. “The store itself is doing very well.”

While he loves the business, Joanisse says the long hours required at a retail store have become more difficult for him. It has also become very hard to find full-time staff, which means he has been working every weekend.

“I still love it,” Joanisse says. “But, I need to not to be here every weekend and take some holidays.”

What he will miss the most by far, Joanisse says, are the customers – some of whom he has served since he began at Ben Younger 40 years ago.

“The customers are the best,” he says, becoming thoughtful when asked if he has any regrets about the decision. “I have been dressing kids for their graduations and then later for their weddings – of course I will miss it.”

Joanisse says he will spend more time at the hobby farm owned by he and his wife, where the couple have horses.

Charlebois, who is 72, retired two years ago when his daughter took over the operations of Sports Expert and says he is enjoying life.

“I keep busy,” he says. “I do lots of cycling, skiing and golfing.”

Preparation for the eventual closure of Maitre Charle actually started several years ago, when Sports Experts moved from the downtown location to the mall on County Road 174 in Hawkesbury. Charlebois sold the downtown building, but continued to rent the Maitre Charle space, knowing the business would only run for a few more years.

“That’s why I sold the building then,” Charlebois explains.

The store was recently offered for sale, but the long hours required to operate the business deterred potential buyers.

“If you own a business you have to be here,” says Joanisse. “Finding people to work weekends is very difficult – not just in a menswear store, but everywhere. The only people I can find are people who are retired and want to work two or three days a week.”

“Just like us!” Charlebois exclaims, as they both burst out laughing.

Working part time is exactly what Joanisse will be doing. He will take a few months off after Maitre Charle closes at the end of February and then join the staff at Sports Experts on a part-time basis. Joanisse says he is excited to the sport equipment and clothing store, where he will still be able to see many of his friends, including longtime Maitre Charle coworker Gabrielle Cardinal, who is the accountant for Sports Experts.

Joanisse and Charlebois both head into retirement with fond memories of the menswear retail business. Saturdays were often a crazy day for the store, with last-minute shoppers often appearing for an emergency purchase.

“Someone is in town for a wedding and in the rush of traveling he forgot his suit,” says Joanisse, of a typical weekend clothing emergency.

“I’ve done a lot of last-minute hemming on a Saturday afternoon,” he adds with a laugh. “I’m not as good as our seamstress but I can manage.”

Customers are telling Joanisse and Charlebois they are sad to see Maitre Charle closing, but happy for them.

“We are so grateful for all of the customers who have been with us for the past 45 years,” Charlebois says.