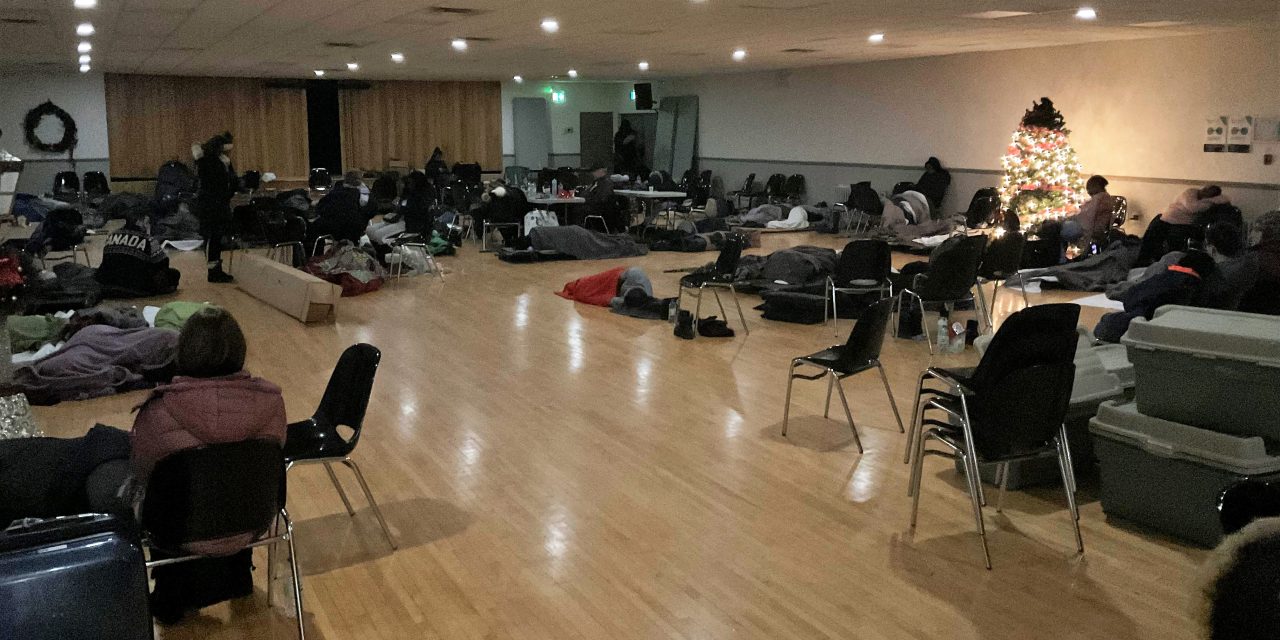 About 150 weary travelers spent Christmas Eve at the St-Isidore Arena, after their vehicles became stranded during a fierce snowstorm. Submitted Photo

The St-Isidore Arena in The Nation Municipality was home to some 150 weary travelers on Christmas Eve, who were taken there by rescue workers, farmers and local citizens after their vehicles became stranded on Highway 417 and surrounding regional roads. Another 75 were sheltered at the J.R. Brisson Complex in Casselman, as the two municipalities worked together to set up emergency services, provide meals, and work to clear roadways as soon as possible.

Events spiraled out of control on Christmas Eve

The spiraling events began late Saturday afternoon, after blowing snow and almost zero visibility forced Ontario Provincial Police to close Highway 417 between Vankleek Hill and Casselman, along with Highway 138. Multiple motorists were already stranded on both highways when the closures took place. Many other drivers took to secondary roads, and quickly became overwhelmed by visibility and drifting snow.

It was literally a perfect storm, as The Nation snow equipment operators were forced to take a rest period at almost the same time, after more than 24 hours of clearing roadways. By early evening, The Nation had declared a State of Emergency and municipal staff were scrambling to open the St-Isidore Arena and coordinate rescue operations.

“Things got quite crazy and out of hand rather quickly,” said The Nation Mayor Francis Brière. “It was a total team effort to pull things together.”

Dan R. Desforges, Deputy Fire Chief of The Nation, and his wife Josée Labelle, were instrumental in opening the St-Isidore arena. The couple also helped make coffee and hot chocolate for those at the arena. Deputy Chief of the Prescott-Russell Paramedic Service Patrick Quesnel organized a delivery of about 50 cots, blankets, and pillows. In near whiteout conditions, fellow Deputy Chief Chris Boudreau drove to Hawkesbury to pick up the cots and bedding at 11 p.m. on Christmas Eve.

“Nearly all were taken by children who were able to get to sleep for a few hours at least,” said The Nation Ward 1 Councillor Tim Stewart, who was at the St-Isidore Arena on Christmas Eve and Christmas Day. “There were a lot of very thankful parents.”

Stewart said efforts from the community prevented what could have been an even bigger disaster. He cited local farmers, who used tractors to help clear roads and rescue trapped drivers and families, including Alain Couture, Eric Levac, Hans Spuehler, Adrian Spuehler, Didier Levac, and others. The Ward 1 councillor also noted numerous families in the municipality offered shelter to stranded motorists, including the Spuehlers, Sylvain Lalonde, Sylvain Levac and Denis Deschamps.

When they woke up on Christmas morning, they were treated to a continental breakfast, donated and served by local caterer Les Fins Becs.

“People at the arena hadn’t eaten since the night before,” noted Brière. “We were very fortunate that (Les Fins Becs) were there to step up.”

Stewart and Brière thanked Manager of Community Programs and Services Sydney Collard, who braved the roads and made it into the arena first thing Christmas morning to take over caring for stranded families and helping to feed them breakfast. Collard organized with multiple tow truck companies throughout Christmas day to reunite owners with their abandoned cars. The two also expressed gratitude to all of the paramedics and firefighters who put their own well being on the line to rescue stranded families.

“As a retired 27-year-veteran paramedic, I can say with absolute full confidence that these people, and many more that I have missed, absolutely saved multiple lives that night,” Stewart said. “People were trapped in their cars on little secondary roads, trying to follow their GPS, because the bigger roads had all been closed.”

“People were terrified as they showed up to the arena,” Stewart said. “They were very thankful.”

The stranded travelers were almost all from out of town, with many from Ottawa and Montréal. With the major highways closed, vehicles attempted to find alternate routes to their destinations. The number of cars stranded on secondary roads, along with limited visibility, contributed to the township’s decision to suspend snow removal operations and declare a state of emergency.

“People started using our roads and visibility was terrible,” Mayor Brière noted. “Our plow operators were saying ‘it’s dangerous – we can’t see the roads, or cars ahead of us that we might even plow into’.”

“At that point it was advised to me that we should declare a state of emergency, in order to to open up a shelter and help people who were stranded.”

Brière thanked municipal staff in Casselman, which also declared a State of Emergency, noting the two municipalities coordinated their efforts during the crisis.

“We were making decisions as a team, because both our municipalities were affected by the storm,” Brière said, adding both municipalities worked with the United Counties of Prescott-Russell on rescue efforts and snow clearing.

In many cases, snow-removal crews had to be called in to provide access for rescue crews and paramedics to reach stranded vehicles and their occupants. Two families stranded near Saint-Rose-de-Prescott, east of St-Isidore, could only be rescued after two separate pieces of machinery were used to create a path for rescue vehicles.

“We had to send the loader to take off the snow, followed closely by the plow, and then the firefighters,” Stewart explained. “It was a total team effort.”

The Nation’s mayor said he is extremely proud of how the entire community pulled together during the emergency.

“Even though it was an event that doesn’t happen very often, it showed the type of people we have in our community,” Brière said.