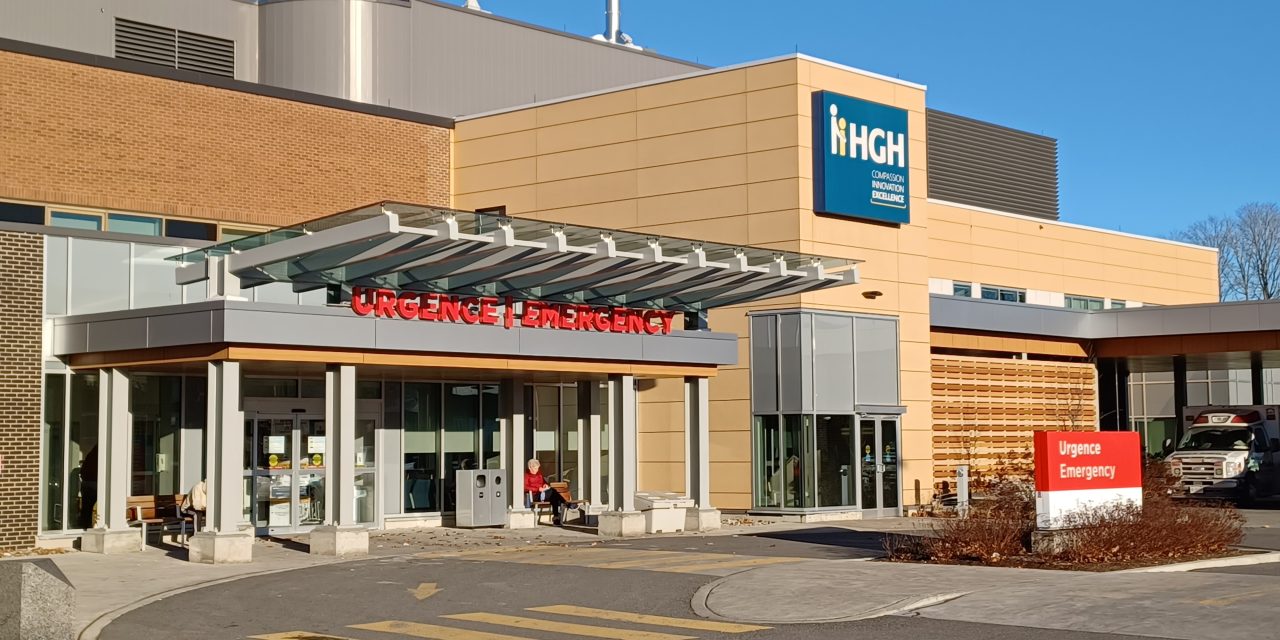 The entrance of the emergency department at Hawkesbury and District General Hospital. Photo: James Morgan

Emergency department patients at Hawkesbury and District General Hospital (HGH) waited an average of 4.6 hours before seeing a doctor in October 2022 – the longest average waiting time in Ontario that month.

The statistics are compiled by Ontario Health, the provincial authority which regulates the public hospital system, and are the most recent waiting time statistics available. The Ontario average was 2.2 hours.

The HGH average wait time was followed by The Hospital for Sick Children in Toronto, at 4.4 hours, and the Children’s Hospital of Eastern Ontario (CHEO) in Ottawa, with an average wait of 4.2 hours.

At Glengarry Memorial Hospital in Alexandria, the average emergency department waiting time in October 2022 was 2.3 hours.

The shortest average waiting time for patients to see a doctor at an Ontario hospital in October was 0.7 hours, in Clinton, located in southwestern Ontario.

HGH CEO Frédéric Beauchemin explained there are a series of reasons for the local hospital’s high average waiting time. The volume of patients using the facility is the biggest factor.

Beauchemin said many people are visiting the emergency department because they require follow-up care from a previous hospital visit and do not have a regular physician to attend to their needs.

“We need to follow up on them to make sure they are okay,” he said.

Emergency departments in hospitals across Ontario in recent months have seen significant increases in visits, because of an increased number of respiratory illnesses – especially among children. Beauchemin said there have been no signs of that reducing at HGH in recent weeks.

“Our emergency trends have been high, or greater,” he commented.

The challenges posed to facilities have been compounded because of occasional shortages of staff.

HGH is also the hospital of choice for many Québec residents seeking emergency department services. Beauchemin acknowledged this contributes to extra volume at the facility.

Beauchemin also said not every hospital reports waiting time data the same, which could result in statistical outcomes that can make a facility look better or worse in comparison other hospitals.

“It’s skewing the data with our peers,” he said.

At HGH, the waiting time begins when a patient registers upon arrival at the emergency department. Other hospitals also use registration as when the waiting begins and some begin the waiting period once a patient sees the triage nurse.

“In terms of that, there are some variances,” said HGH Vice President of Clinical Programs and Chief Nursing Executive, Ginette Ferguson.

She added that in some cases, patients traveling to a hospital by ambulance could be registered before they even arrive at the emergency department – meaning the waiting had already started for them.

Ferguson said there are opportunities to improve and referred to challenges with staff availability.