This Week in Local History – November 23, 2022 – The Review Archives – 1947: Canadians back on strict war-time restrictions 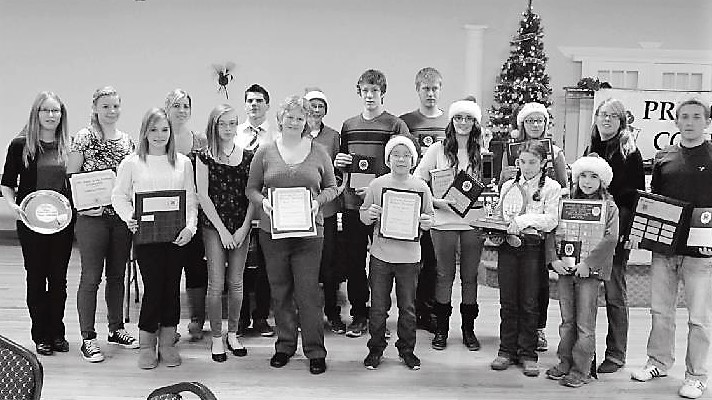 Photo from the 2012 Prescott County 4-H Awards Night and Banquet, published in the November 30, 2012 edition of The Review. Photo: Review Archives

Highway 50 open from Mirabel to Hull

The Review, November 28, 2012 – MONTEBELLO – It’s been nearly 50 years since politicians began to boast of a plan to create a highway linking Mirabel to Hull and $800 million later the Highway 50 expansion project is complete. Highway 50 officially opened to commuters on Monday, November 26, at 11 a.m. Commuters were using the highway within minutes of removing the barriers.

Townships to merge on January 1

The Review, November 26, 1997 – PLEASANT CORNERS – Champlain Township staff are preparing to make a big move next month to ensure the municipality is up, running and ready to serve the public on January 5. Vankleek Hill, West Hawkesbury, L’Orignal and Longueuil will technically exist as separate municipalities until December 31. They will officially merge to create Champlain Township on January 1.

The Review, November 22, 1972 – VANKLEEK HILL – Overall winner Donnie MacDuff of the St-Eugène 4-H Club took home the ‘Ottawa Citizen’ award of $125, as the Prescott County 4-H Club held its 1972 awards night at VCI on November 16. Miss Dawn Nixon of the Vankleek Hill 4-H Club won three awards, including the Trophé de la Fédération d’Agriculture’ as the girl with the highest number of points. Miss Aileen Wilkes won for Junior member with the most points, while Richard Longtin won the CNE Shield for Junior with the highest number of points in the summer Judging Competition. Kevin MacCallum won an award for showing the Champion Junior Holstein, while Barry Mooney won both the Haughton Trophy and Union of Canada Trophy for his excellent work with the horse club.

Canadians back on stiff war-time restrictions

The Review, November 27, 1947 – OTTAWA – Stiff wartime restrictions have been placed on Canadians in every walk of life, as means of saving U.S. dollars. Prime Minister Mackenzie King gave the bad news in a national address this week. Jewelry imports from the U.S. have been banned to help save dwindling dollars. Radios, refrigerators and washing machines are also on the banned list. The cost of Ford and Mercury cars is up and Lincoln cars and Ford buses are no longer being imported into the Dominion, as a result of an import ban on American cars.

Vankleek Hill firefighters save the day

The Review, November 24, 1922 – VANKLEEK HILL – The sombre tones of the fire bell aroused the citizens of Vankleek Hill at about 7:30 on Sunday morning and on a hasty trip to Main Street it was learned that Mr. R.B. Tweed’s garage was on fire. Firefighters and three fire engines concentrated on saving the house, while demolishing outbuildings to contain the blaze. Just exactly 45 minutes after the fire was noticed, the garage walls fell in and it was seen that the heroic efforts of the Vankleek Hill Firefighters had saved the day and confined the fire to the one building. We cannot give enough praise to Vankleek Hill’s excellent firefighters, for if it had not been for them, the town would have been in ruins.

The Review, November 26, 1897 – EAST HAWKESBURY – Upwards of 300 persons congregated at the social gathering held in the Stardale cheese factory last Friday evening. The music was well rendered, the floor in good condition and the hall beautifully decorated. Refreshments were served at about the midnight hour and dancing continued to the hearts of all present. On behalf of the Hill young folk we extend their hearty thanks to the young folks of East Hawkesbury for the very pleasant evening.

Subscribe to The Review Archives, where you can find more than 125 years of local history at your fingertips. Visit https://thereview.ca/archives/ to sign up today.