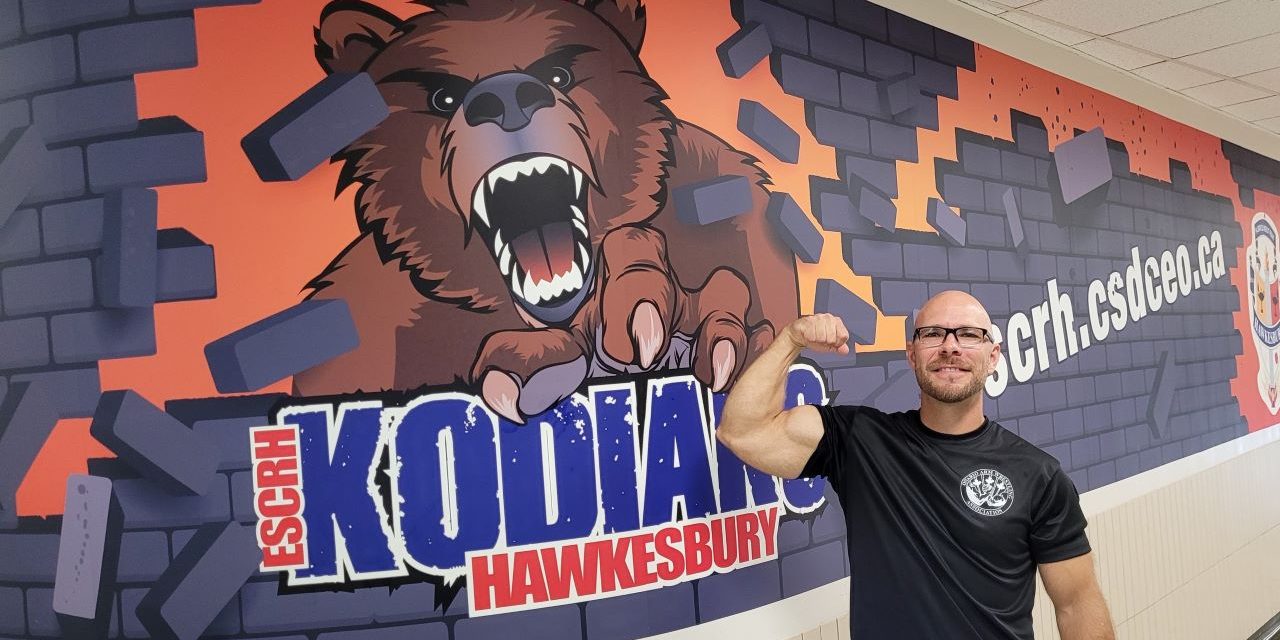 After years away from the sport of arm wrestling, Hawkesbury’s Philippe Lauzon returned to official competition with a bang in 2022.

The 41-year-old, who works as a physical education teacher at École secondaire catholique régionale de Hawkesbury (ESCRH), took home silver and bronze medals at the 2022 Canadian National Arm Wrestling Championships in Winnipeg last July. It was the second top performance of the year for Lauzon, following up a first-place finish at the Ontario championships in May of this year.

This season marked a return to competition for the married father of two young boys. He competed from 2006 through 2012 in the sport, before leaving to start his young family with his wife Julie, who is also a phys ed teacher at ESCRH. He continued to train a bit at arm wrestling and also discovered crossfit, which became his primary fitness activity for several years.

“For sure you can’t be as good at arm wrestling when you’re doing crossfit, because it’s two completely different disciplines,” Lauzon notes.

But in 2021 Lauzon decided the time was right for a return to the sport he loved. He began dedicating his training fully to arm wrestling, with the majority of his focus on arm and hand strength, intending to compete in both left and right-handed divisions. He also lost weight, moving down to the 85 kilogram division, after previously competing at 90 kilograms.

The hard work paid off. At the Ontario championships, held near Belleville on May 21, Lauzon won the gold medal in the 85 kilogram left-handed division. In right-handed competition he found himself facing a tough draw in the double-elimination tournament, finishing sixth overall.

With a sponsorship from local company Grenville Drilling paying his airfare, Lauzon flew to Winnipeg for the Canadian National Championships from July 1 to 3. There, he redeemed himself in the 85 kg right handed competition, taking home the bronze medal. 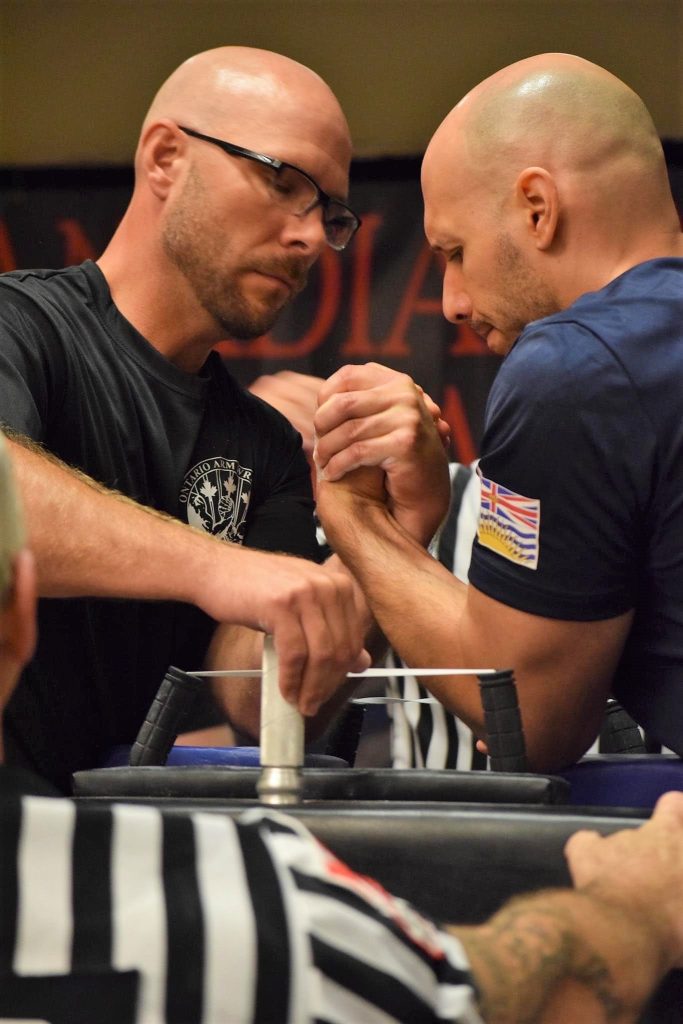 Lauzon (left) faces off against multi-time national champion Anthony Dall’Antonia, of British Columbia, in the finals of the Canadian National Arm Wrestling Championships, held in Winnipeg from July 1-3. Submitted Photo

Lauzon once again fared even better in the left-handed 85 kg division, rolling through preliminary and semi-final matches to take home the silver medal – facing off with multi-time Canadian arm wrestling champion Anthony Dall’Antonia, of British Columbia, in the final. In besting Lauzon, Dall’Antonia won his 25th national title – a record.

“I had a blast and I got two podiums,” beams Lauzon, not at all upset over his loss to the 25-time national champion in the gold medal match. “It’s a learning experience.”

“In arm wrestling it’s not just strength,” Lauzon says of Dall’Antonia’s gold-medal performance. “He beat me in speed and table IQ.”

Giving back to the sport

Back at his job at ESCRH, Lauzon’s success over the summer has not gone unnoticed by his students and he is using the opportunity to help build the sport he loves at the grassroots level. The phys ed teacher has started an arm wrestling club at school and has recruited an enthusiastic group of students.

“It’s the best way to grow the sport, by starting it in the school,” Lauzon says, noting many of the students in the club do not participate in other sports at the school. “Some of them don’t like team sports, or they don’t have the aptitude for those sports.”

“But they love arm wrestling and they’re good.”

Fellow physical education teacher and friend, Dan Tremblay of Vankleek Hill Collegiate Institute, has also started an arm wrestling club and the two hope to hold a combined event for the two schools this winter. The eventual goal is to form clubs in other schools in the region to create a league.

There is minimal cost to the sport, it’s accessible and is familiar to everyone, he notes.

“Arm wrestling is something that probably every human being has done once in their life,” Lauzon observes. “It’s a sport that everybody knows, but they don’t necessarily know it as an organized sport.” 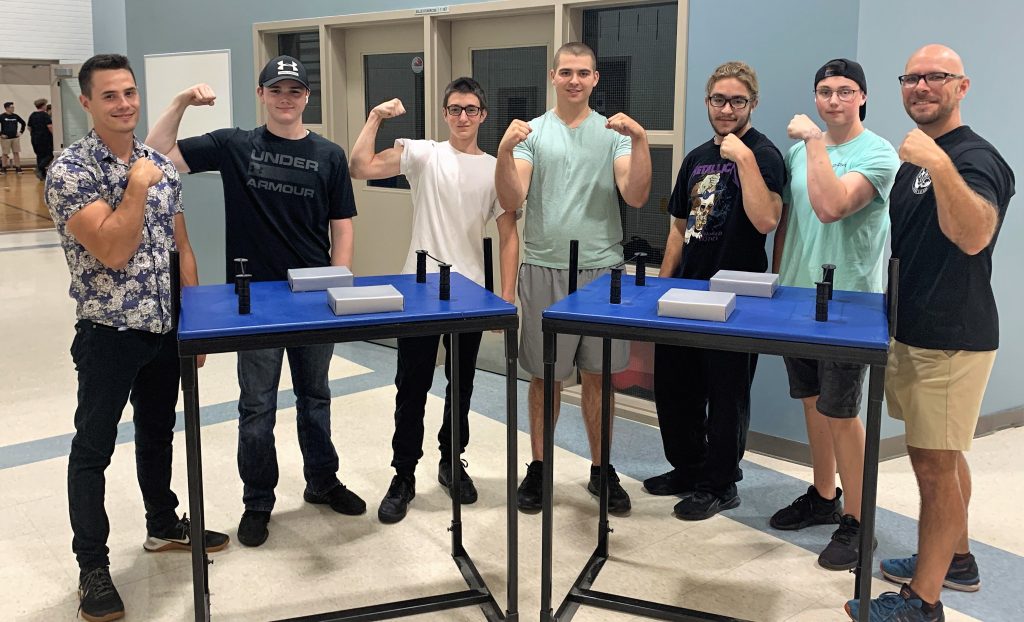 With a successful 2022 season now behind him, Lauzon says he is now all-in on arm wrestling competition and believes he can do even better in 2022 – and far exceed the results he achieved when competing regularly from 2006 to 2012.

“I never developed my full potential then,” he reminisces. “Even when I was arm wrestling, I trained in all types of things and played a lot of different sports.”

Training at his home gym three times a week, Lauzon focuses the bulk of his time working on his arms, while still paying attention to his core strength and overall fitness. At least once a week he practices arm wrestling on the table to maintain his coordination and muscle memory for the sport.

“My job also helps keep me in shape,” he laughs. “I do a lot of running around.”

Wife Julie is also all in. A competitive athlete herself, “she understands it and she’s behind me,” Lauzon says and the couple intend to plan their annual summer vacation with their two children around the Canadian championships, which will be held in Cape Breton in 2023.

“Arm wrestling is a niche sport,” Lauzon says, explaining why he spends so much time training to compete in what some people consider to be just an activity, or bar challenge. “But it is a sport and when you get into the sport you realize the (competitors) train hard and are good athletes.”

The field is expected to be tough at the national championships in Cape Breton next year, as some top competitors from the Ontario, Quebec and the Atlantic provinces chose not to make the long trip to Winnipeg in 2022.

“If you want to be the best, you’ve got to beat the best,” Lauzon says of the challenge. 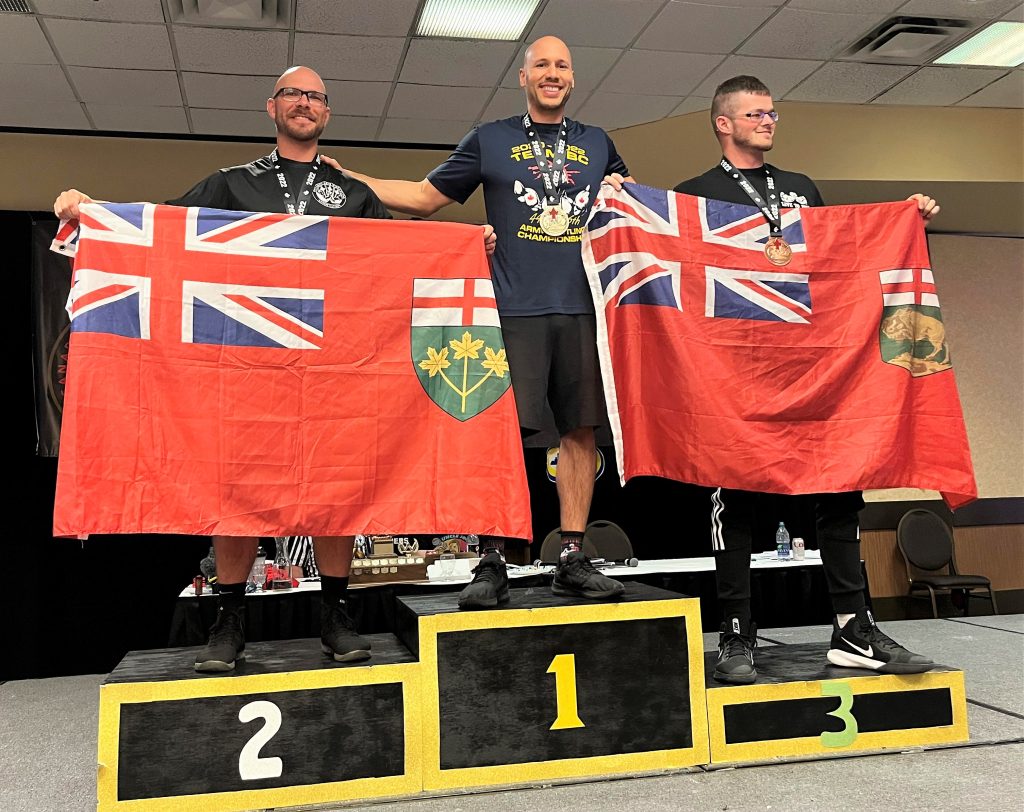