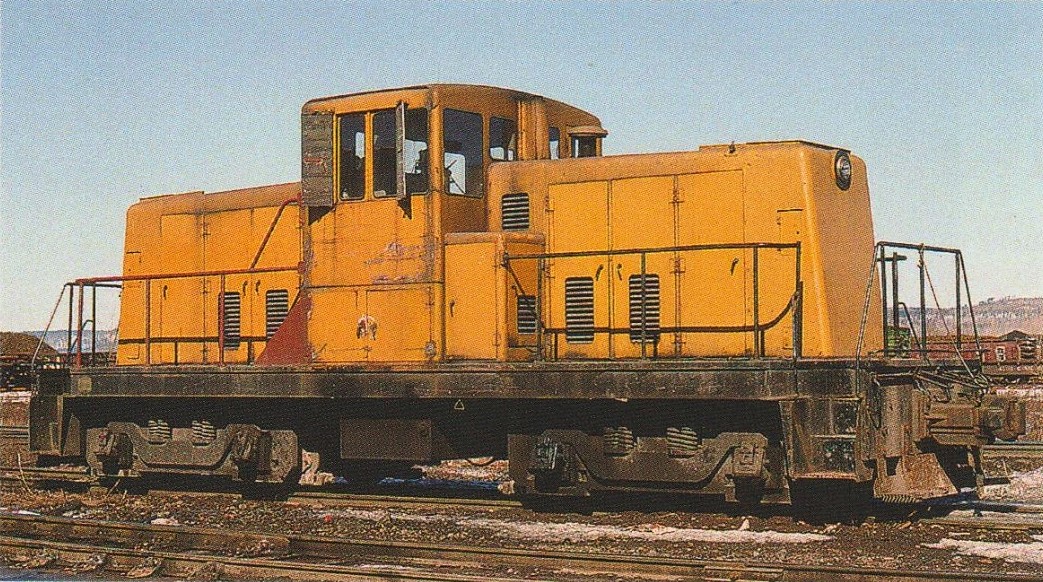 Canadian Refractories No. 1, a 550 horsepower, 65 ton GE30807, built in 1951 and rebuilt by CGE in June of 1964. It is pictured later in life after being purchased by Ivaco Rolling Mills in L’Orignal, which acquired it in 1981, when the Canadian Refractories facility in Brownsburg-Chatham closed. Photo: Fred Clark, courtesy of Branchline magazine

Magnesite mine and railway played key roles in both World Wars 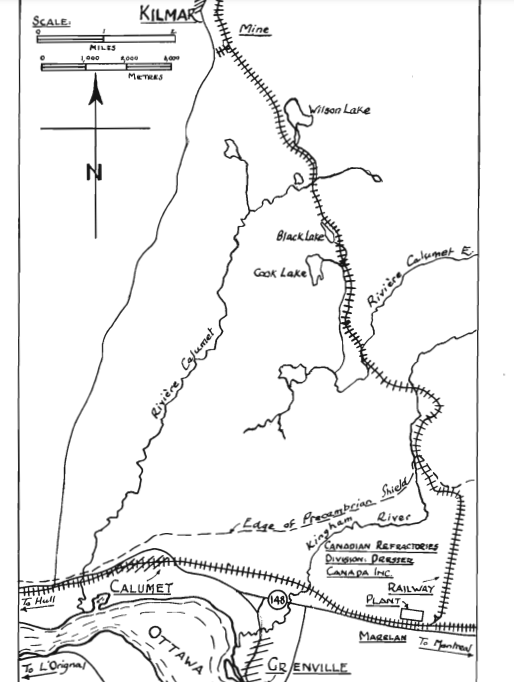 by Shawn MacWha
Special to The Review

Throughout most of the past century, several different railways ran from the Ottawa and St. Lawrence Rivers up into mountains of Western Quebec. Trains from companies such as the Pontiac and Pacific Junction Railway, the Ottawa and Gatineau Valley Railway, and the Montfort and Gatineau Colonization Railway, all pushed into the rocky hills of the Laurentians to carry settlers north and to bring the resources of the Canadian Shield south to a growing nation. One of the lesser known of these now-abandoned lines was the Dominion Timber and Minerals Railway. For 65 years it connected a strategically important mine in the hamlet of Kilmar, Québec with the Canadian Pacific ‘North Shore’ railway at Marelan in what is now Brownsburg-Chatham, just across the river from Hawkesbury.

Magnesite is a mineral used in making the bricks that line high-temperature kilns, ovens, and blast furnaces. In this way it is essential to the production of glass, cement, steel, and a variety of other industrial metals. The mineral was discovered in the hills around Kilmar, Québec, at the beginning of the last century and by 1907 several small-scale mines had been set up to extract the ore. Unfortunately, its low-grade and the remote location of the deposits made large-scale mining uneconomical. That all changed with the start of World War I, as access to higher-quality magnesite from the Austro-Hungarian Empire was cut off and the local mines were forced into full production. From very modest shipments of only 358 tons of ore in 1914, output rose dramatically to 16,285 tons in 1915, 53,796 in 1916, 58,340 in 1917 and 28,564 tons in 1918.

From the start of mining operations until 1916, the ore was carried down to the Canadian Pacific line using horse drawn carts travelling over treacherous mountain roads. Owing to the obvious inefficiencies of this arrangement, a narrow-gauge railway was built that year to ease the shipments. The line was approximately 20-kilometres long and ran from Kilmar southeastwards towards Wilson Lake. From there it passed west of the lake and followed the Calumet River for a while, before heading towards Black Lake. At this point the line turned almost directly southwards and crossed the Calumet and East Calumet Rivers over several short bridges, before turning eastwards again near McGillivray’s Hill and cutting over to the tiny Kingham River. It followed this stream for a kilometre or so, before jogging to the east and then turning sharply southwards again and making an almost straight line towards Marelan on the CP line. From Marelan, which was originally known as Magnesite Station or Magnesite Junction, the ore was shipped to processing facilities in either Hull or Longue-Pointe, Québec.

In its early days, the railway was equipped with four 15-ton steam locomotives and a number of second-hand ore cars. On some days traffic was so busy that all four engines were in use at the same time, requiring the efforts of more than 30 crew. During this time the railway – and the magnesite it carried – was critical to the manufacture of steel used for ships, tanks and artillery pieces that helped to win the war. With victory, however, demand for Kilmar’s magnesite fell sharply and in 1919 the railway only shipped 9,940 tons of ore. Eager to support this nascent industry, scientists at the National Research Council in Ottawa developed a new refractory material, named Magnafrit, in the early 1920s that made the most of the unique qualities of the Kilmar ore, and these efforts ultimately kept the mines, and the railroad, in business. 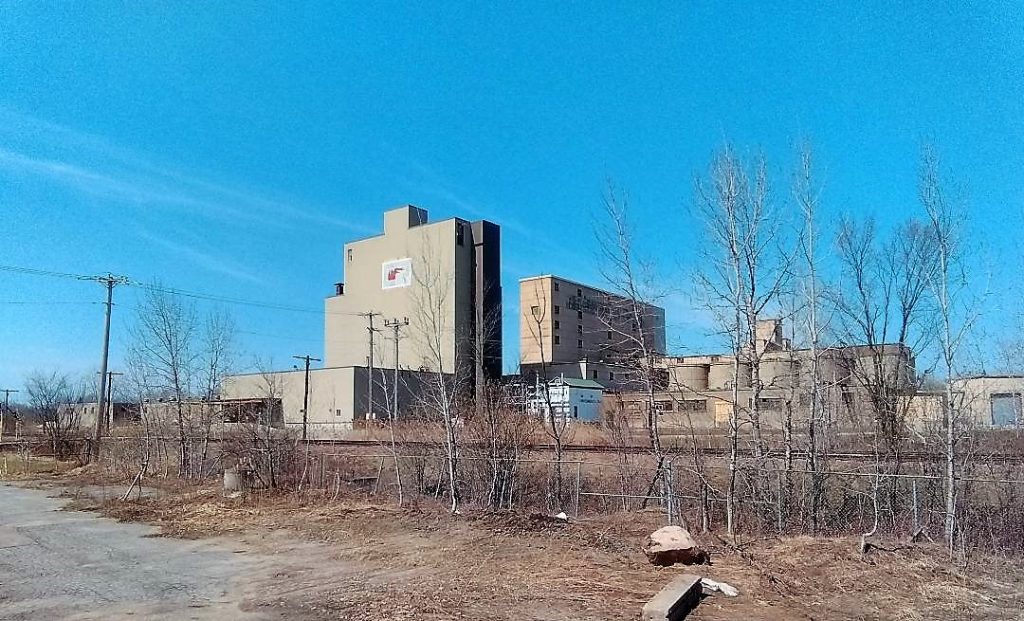 The former Canadian Refractories brick plant in Marelan in a photo taken in 2021. The facility is now owned by Resco. Photo: Shawn MacWha

By 1929 almost 250,000 tons of magnesite had been pulled from the mines, justifying the expense of converting the railway to a heavier standard gauge. With this conversion, the original rolling stock was disposed of and the steam locomotives were replaced with three 35-ton gasoline powered engines produced by the Plymouth Locomotive Works of Plymouth, Ohio. Soon thereafter, in 1933, the two leading enterprises at Kilmar, the North American Magnesite Company and the Scottish Canadian Magnesite Company merged to form Canadian Refractories Limited, at which point the railway assumed its more commonly known name, the Canadian Refractories Railway (CRR). Production increased sharply again with the start of World War II, as North American industry surged to rearm Canada and the United Kingdom. Speaking of these mines, in 1941 an Ottawa newspaper proudly proclaimed that “an obscure Canadian mineral deposit, once practically ignored, has become an element in the sinews of steel welded for the Empire’s war effort.”

In 1951 Canadian Refractories added a much more powerful 65-ton 550 HP General Electric diesel locomotive to its inventory, after which time the smaller Plymouths were relegated to track maintenance and yard work. For the next 30 years the GE locomotive was employed to carry ore down the mountain and for pulling supplies back up from the river. This level of industry continued through the 1960s and 1970s, with the Kilmar plant undergoing a major expansion in the early 1980s.

Sadly, the end of the railway came in the summer of 1981. Faced with annual costs of almost $250,000, the company realized it was more economical to ship the ore by truck and ceased rail operations. The GE locomotive and one of the Plymouth engines were sold to the Ivaco Rolling Mills, a steel producer in L’Orignal, Ontario. The other two Plymouths were scrapped.

Today the track bed of the CRR lies abandoned. Unlike many former railways, it has not been converted into a formal trail, although parts of it are clearly used by ATVs and snowmobiles. For the Sunday explorer segments of the route can still be easily found along the backroads south of Kilmar. There are, for example, obvious sections running beside Scotch Road near Lake Wilson. In other places the old line is difficult to find, and it is sometimes hard to believe that it has been only 41 years since the last train stopped running. Still, one could do worse than spending a sunny spring day looking for this lost line and thinking about the strong people of the past who worked so hard along this now almost forgotten pathway. 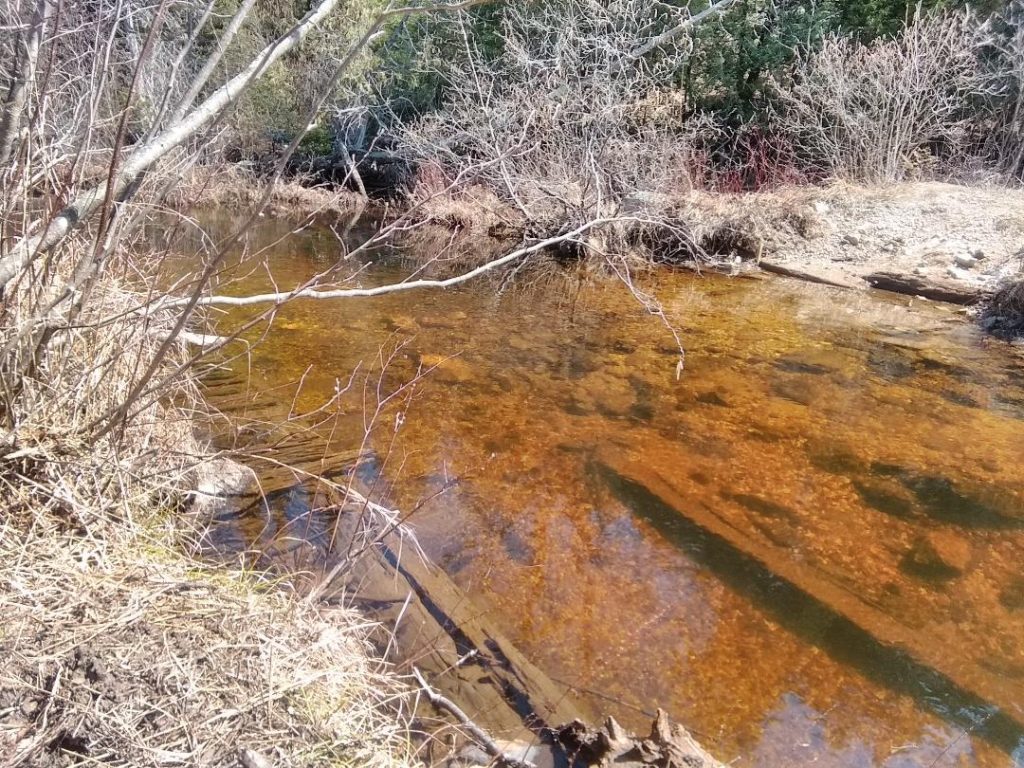 While the end of the Canadian Refractories Railway came in 1981, traces of its existence still remain, including cribbing for the short bridge over the Calumet River. Photo: Shawn MacWha 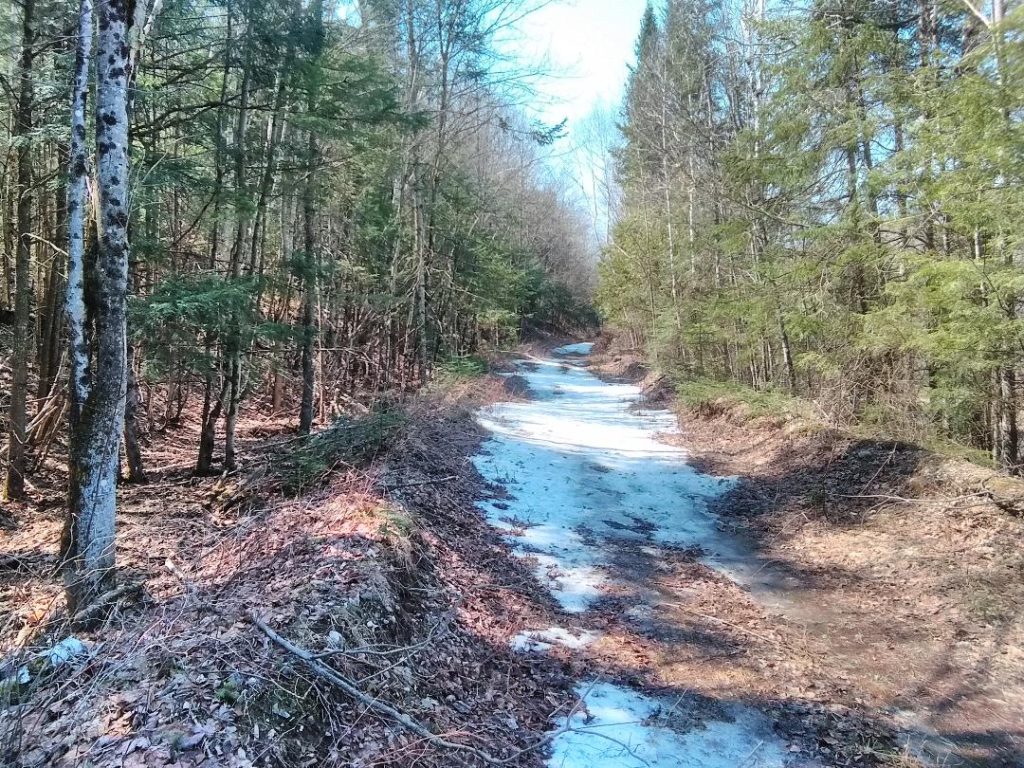 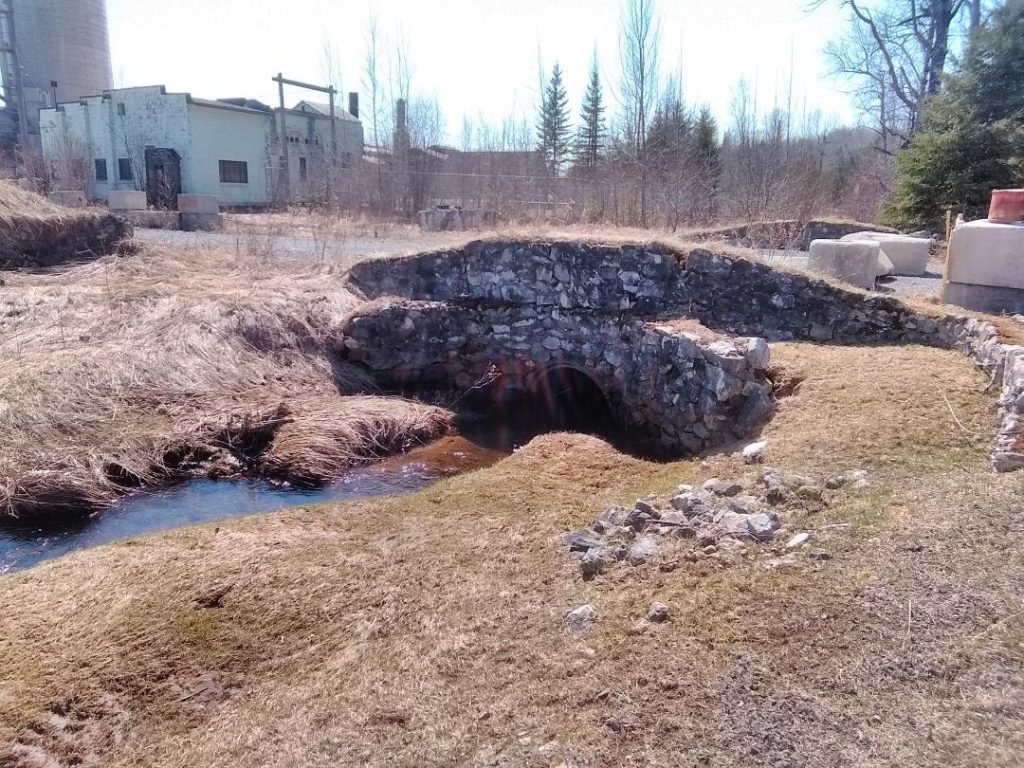 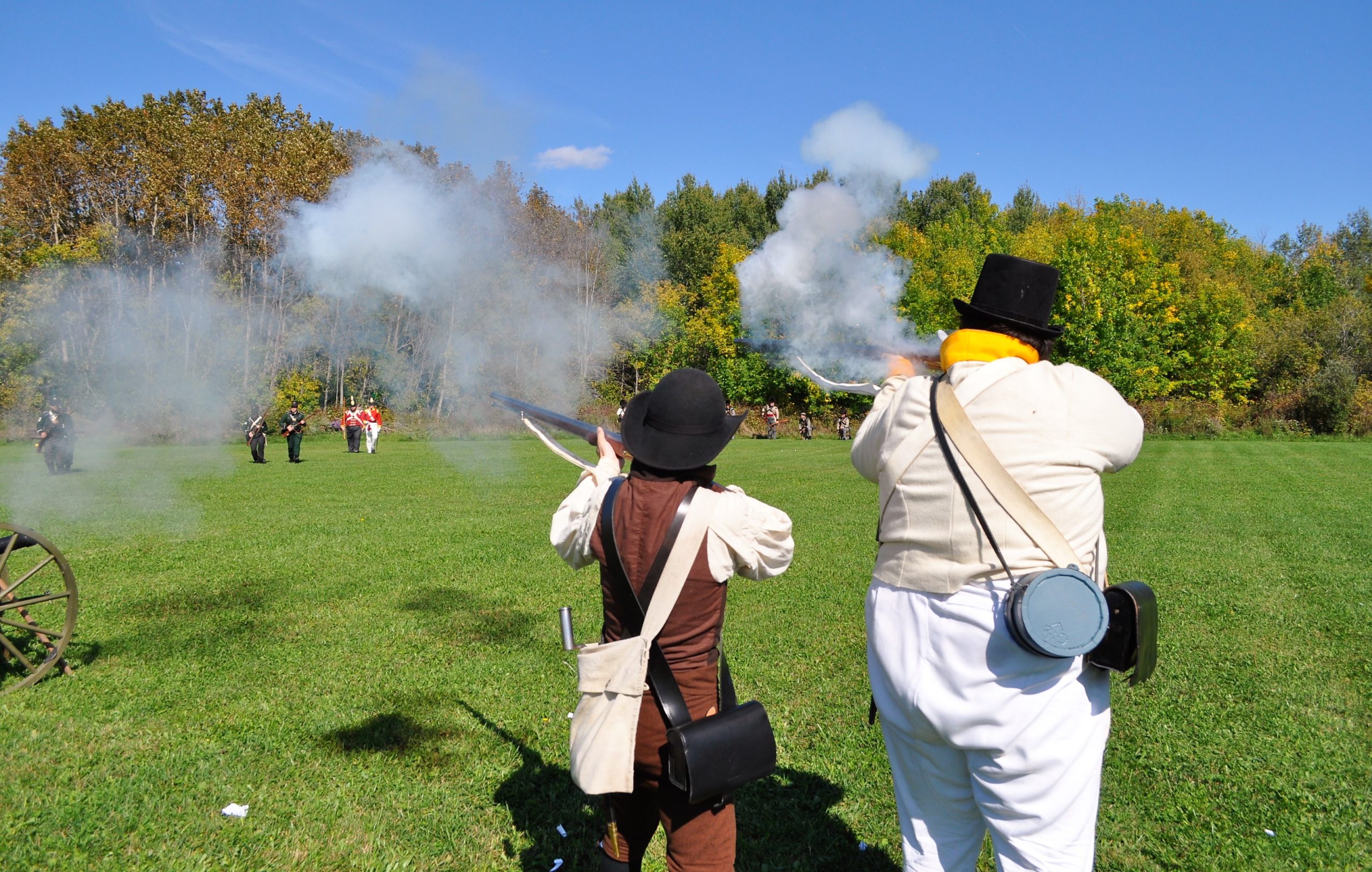 Community concerns over the loss of the convent? Cry me a river! 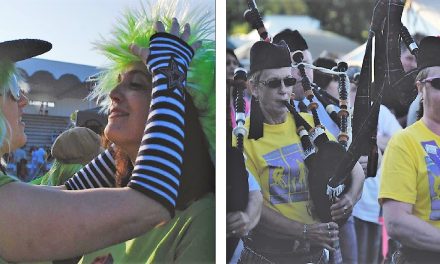 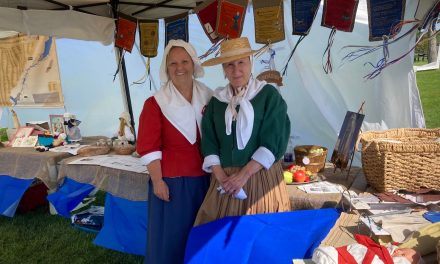