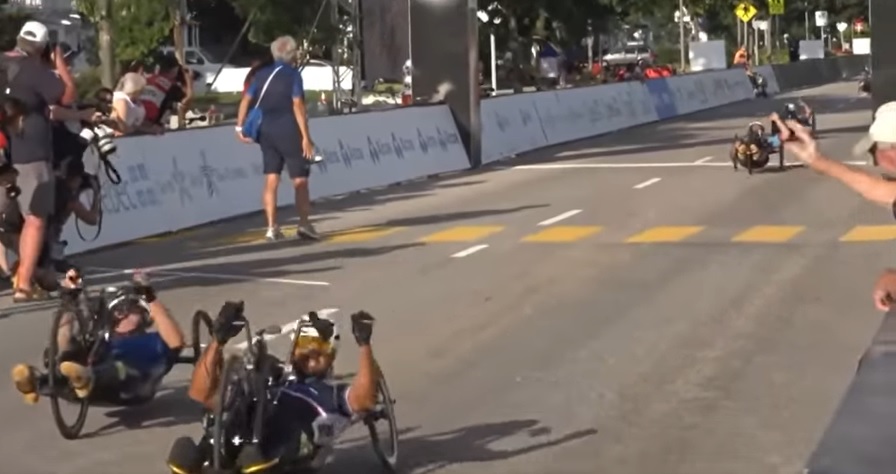 Joey Desjardins, on the third cycle from the front, crossing the finish line and winning the bronze medal at the World Paracycling Championships in Baie-Comeau on August 13. Screenshot from CBC/Radio-Canada and paralympic.ca

It was a monumental weekend for Champlain Township paracyclist Joey Desjardins.

Desjardins completed the race in two hours, two seconds behind second place finisher Paolo Cecchetto of Italy whose time was an even two hours.

Riadh Tarsim of France placed first with a time of one hour, 59 minutes, and 59 seconds.

More than 500 riders from 40 countries were competing in Baie-Comeau.

After his bronze medal win, Desjardins was taking his success in stride.

“It’s incredible, honestly, I’m just trying to take it all in. It’s going to take a little bit to sink in but Team Canada, world champs, it’s amazing!” he said.

Desjardins was also fortunate to have his wife Vanessa and daughters Stella and Zayla in the audience in Baie-Comeau.

“I could definitely hear Vanessa tell me GO! And just the girls wanted to see me give everything I have at that moment,” said Desjardins.