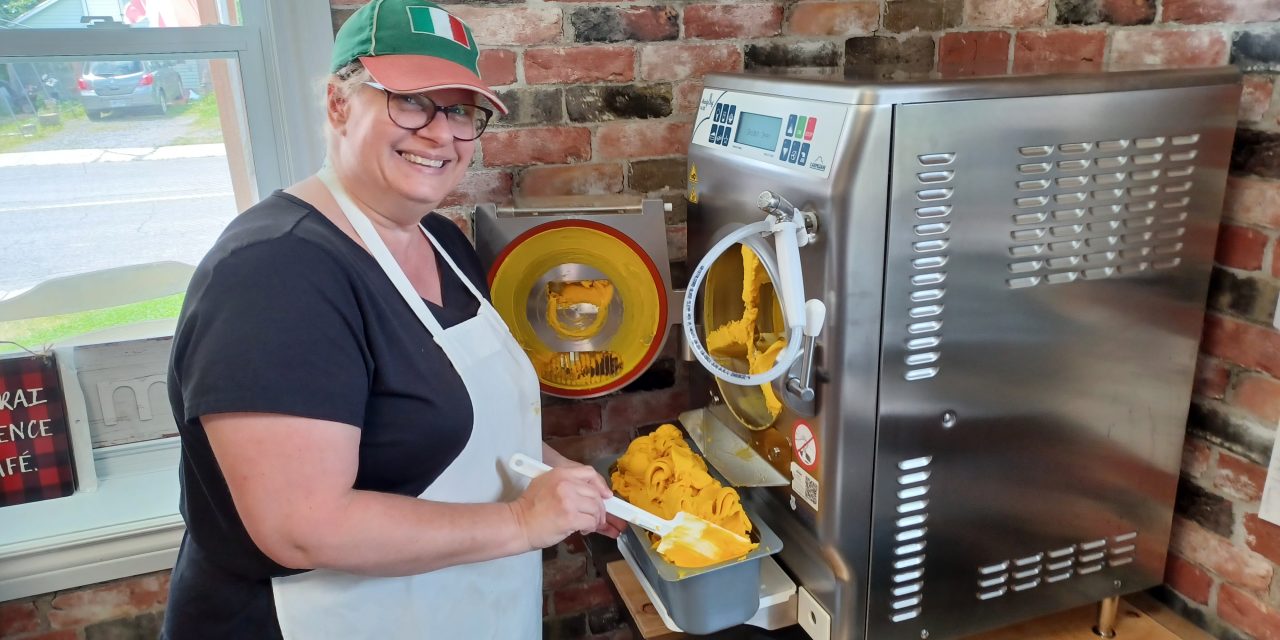 One does not have to travel to Venice Italy to enjoy gelato at a café beside a waterway. The frozen dessert and setting to match are as close as Plantagenet.

Nonna’s Gelato is produced at Café sur la Rive and since Saturday, July 9, it has been available homemade at the café, which is scenically located beside the South Nation River on Water Street in Plantagenet.

Café owner Nathalie Bercier-Gauthier has sold gelato from other manufacturers since opening the café in 2019, but she wanted to offer a homemade version to customers.

“Now I know what’s in it,” said Bercier-Gauthier.

To make the gelato, Bercier-Gauthier purchased a machine which was imported from Bologna in Italy.

“There’s only one in Canada and we have it,” she said.

Bercier-Gauthier learned to make gelato from an Italian master in Toronto.

The main ingredients in gelato are milk and cane sugar. Fresh fruit and flavourings are added. Bercier-Gauthier is also producing sorbet at the café. Whenever possible, locally grown fruit from Les Fruits du Poirier near St-Eugène is used. Nonna’s Gelato is offering 13 flavours of the frozen treat, and all of them are named after members of the family of Bercier-Gauthier and her husband, Joe Gauthier. Nonna is the Italian name for a grandmother.

Gelato is not exactly the sort of dessert associated with Eastern Ontario, but Bercier-Gauthier, who grew up on a dairy farm near Treadwell, has decided to introduce it to the region partly out of her love for Italy and its culture. She and Gauthier took a trip to the European country in 2018 and she was impressed with the café culture there.

“We fell in love with the concept,” Bercier-Gauthier remarked.

That love led to the opening of Café sur la Rive in 2019.

She wants Nonna’s Gelato and Café sur la Rive to be a place for community and families.

“Come with a friend, have a bit to eat, and talk,” Bercier-Gauthier said.

That concept of community and communication is rooted in Bercier-Gauthier’s professional background. She is also a psychotherapist who also operates the Centre-pour-soi in Alfred. Bercier-Gauthier said people need community in their lives.

“We need to stop and talk,” she commented.

Café sur la Rive encourages conversation. A sign on the wall says “NO WIFI. Talk to each other. Pretend it’s 1995.”

Bercier-Gauthier has also been making renovations to the café to give it a more Italian appearance.

In addition to being produced and sold at the café, Nonna’s Gelato will also be available at Les Fruits du Poirier near St-Eugène and at Les Matantes on Highway 34 near Hawkesbury. Bercier-Gauthier eventually wants to have the gelato available in every community across Prescott and Russell counties.

Café sur la Rive and Nonna’s Gelato in Plantagenet is open from 9 a.m. to 4 p.m. from Tuesday to Sunday and is closed Mondays. 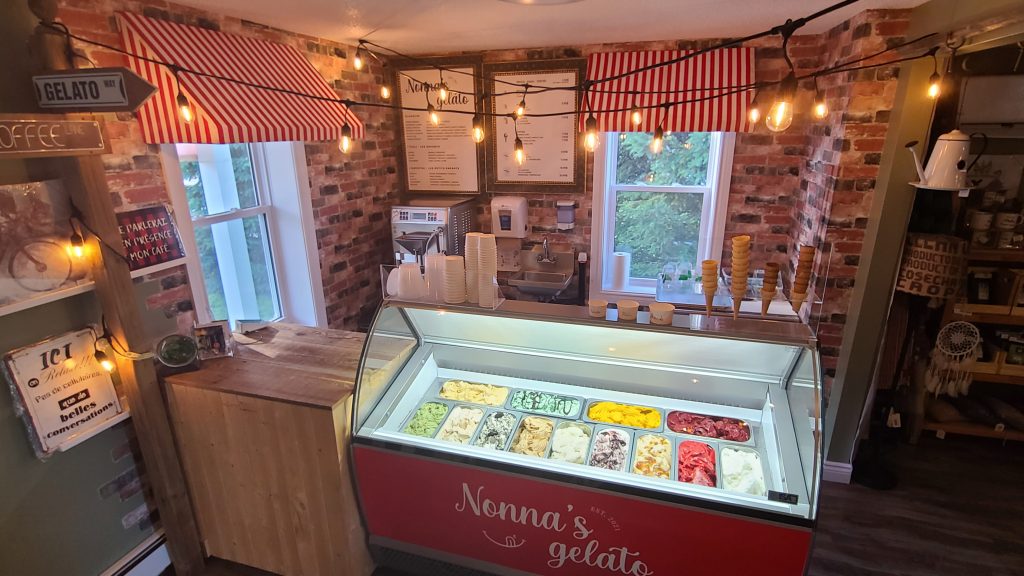