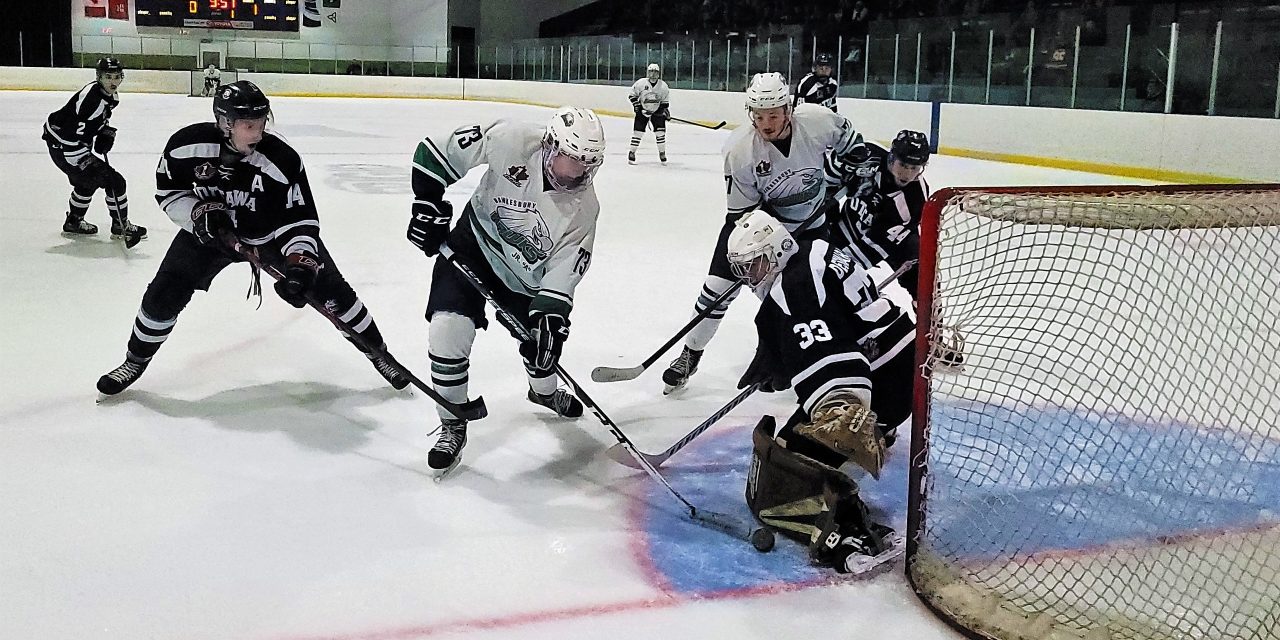 Hawks forward Ryan Murphy (73) is stymied on a great close in chance by Ottawa netminder William Desmarais (33), while Jeremy Tremblay (77) gors to the front of the net for a potential rebound. Desmarais was spectacular in goal, as the Junior Senators closed out the series with a 4-0 win at the Robert Hartley Sports Complex in Hawkesbury on Tuesday, May 10. Photo: Reid Masson

The dream of a Central Canada Hockey League Junior A championship came to an end for the Hawkesbury Hawks Tuesday evening (May 10), as they fell 4-0 to the Ottawa Junior Senators at the Robert Hartley Sports Complex. The Junior Senators completed their sweep of Hawkesbury with the 4-0 shutout victory, to capture their third straight Bogart Cup Championship.

The two teams were evenly matched throughout the series, with Ottawa winning the first three contests by one goal – twice in overtime. But on Tuesday evening, two defensive lapses in the first period put the Hawks in a hole from which they could not recover, thanks to the outstanding play of Ottawa goaltender William Desmarais.

Simon Isabelle scored two goals, Samuel Edwards and Massimo Gentile added singles of their own, while William Desmarais was miraculous in the net, making 35-saves for the shutout victory. Desmarais was named Bogart Cup Playoff Most Valuable Player.

Ottawa scored twice in the first period and added two empty net goals late in the third, as the Hawks pulled netminder Matthew Tovell and desperately tried to get back in the game. Desmarais also earned first star honors on the night, stopping every shot he faced and making several spectacular saves, as Hawkesbury outshot Ottawa 35-25.

Hawkesbury came out flying in the first period, dominating play and firing multiple shots on the Ottawa net, but the Junior Senators struck first just five minutes into the game. A defensive giveaway in their own zone by the Hawks ended up on the stick of Isabelle, who made no mistake in firing home his first goal of the night.

Samuel Edwards scored Rockland’s second goal of the period at 12:30 on a long shot from near the blueline that eluded a screened Tovell in the Hawkesbury net. The Hawks were on their heels for the remainder of the first period, but Tovell held the door shut the rest of the way.

After a scoreless second, the Junior Senators played a shut-down defensive style in the final frame, with Demarais continuing to frustrate the Hawks, who did everything they could to charge the net and make life difficult for the Ottawa netminder. With Tovell pulled for an extra attacker, Gentile scored his fourth goal of the playoffs for Ottawa at 16:19 to put the game out of reach. Isabelle added his second of the night into an empty net just 27 seconds later.

The Junior Senators, who were ranked as the sixth best team in Canada by the Central Junior Hockey League at the end of the regular season, will represent the CCHL at the 2022 Centennial Cup playoffs, which will be held in Estevan, Saskatchewan, from May 19-29.

The Ottawa Junior Senators celebrate with the Bogart Cup, after eliminating the Hawkesbury Hawks. Photo: CCHL 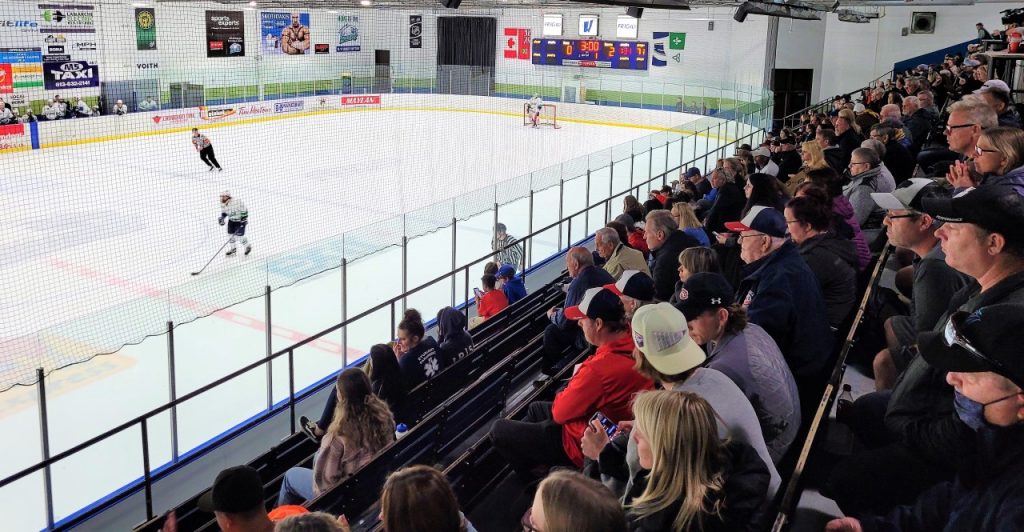 It was a disappointing night for Hawks supporters at the Robert Hartley Centre on Tuesday evening, but the team provided great entertainment all season long during its run to the Central Canada Hockey League finals. Photo: Reid Masson