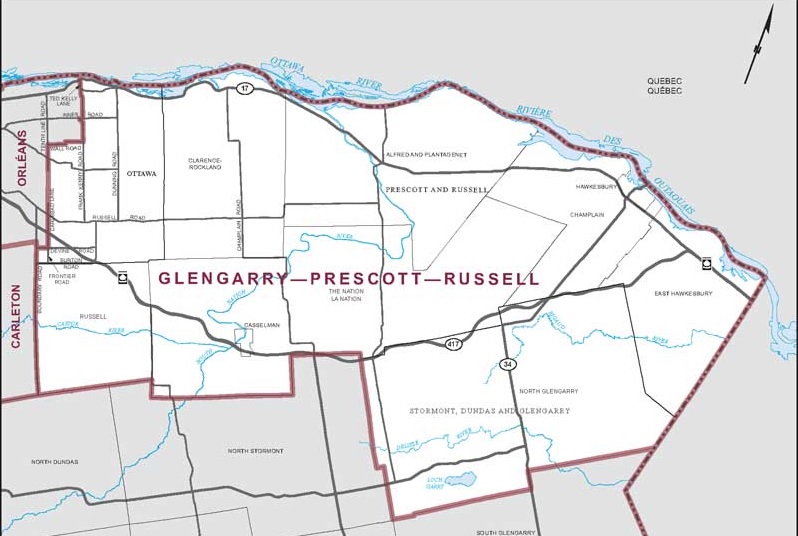 Map of the provincial riding of Glengarry-Prescott-Russell. Map: Elections Ontario

The line up of provincial election candidates in Glengarry-Prescott-Russell is taking shape.

Ontario residents will vote on June 2, with the provincial election campaign having officially kicked off on May 4. Progressive Conservative (PC) Leader Doug Ford, Liberal Leader Steven Del Duca, and New Democratic Party (NDP) Leader Andrea Horwath are travelling around the province to make their cases to voters about why their party should form the next government with them leading it as Premier.

Locally, the race is beginning to take shape in the riding of Glengarry-Prescott-Russell. According to Elections Ontario, five candidates were officially on the ballot in the riding as of May 5. The deadline for candidates to file nomination papers is May 12.

The Ontario New Democratic Party (NDP) has nominated Alicia Eglin as their candidate in Glengarry-Prescott-Russell for the provincial election.

Thaila Riden of East Hawkesbury is the Green Party of Ontario candidate in Glengarry-Prescott-Russell.

The PC candidate in Glengarry-Prescott-Russell is Stéphane Sarrazin of Alfred. He was elected Mayor of the Township of Alfred and Plantagenet in 2018 and served as the Warden of the United Counties of Prescott and Russell in 2021.

The Ontario Liberal Party candidate is Amanda Simard, who was elected Member of Provincial Parliament in 2018 as a member of the PC caucus. Simard left the PC caucus in late 2018 in protest to changes Premier Doug Ford’s government made to French-language services and sat as an independent. In January 2020, Simard joined the Liberals.

Glengarry-Prescott-Russell has both a diverse geography and population. Its territory includes all of the United Counties of Prescott and Russell, the Township of North Glengarry, and the former City of Cumberland within the amalgamated City of Ottawa. There are suburban areas, small towns and villages, agricultural areas, and manufacturing industries across the riding. Approximately 54 per cent of Glengarry-Prescott-Russell residents speak French as a first language, but there are also majority English-speaking communities across the riding.

With one exception, Glengarry-Prescott-Russell voters have tended to elect an MPP who was a member of the party that won the election. The riding’s current boundaries were established in 1999 and Liberal Jean-Marc Lalonde was elected, even though the PC’s under Mike Harris won the election that year. Lalonde was re-elected in 2003 and 2007 when the Liberals under Dalton McGuinty won both elections.

After Lalonde’s retirement, Liberal Grant Crack was elected MPP in the 2011 election, also won by the McGuinty Liberals. Crack was re-elected in 2014 when the Liberals, then led by Kathleen Wynne, won the election. Amanda Simard was elected as a PC in 2018 when that party won under Leader Doug Ford.