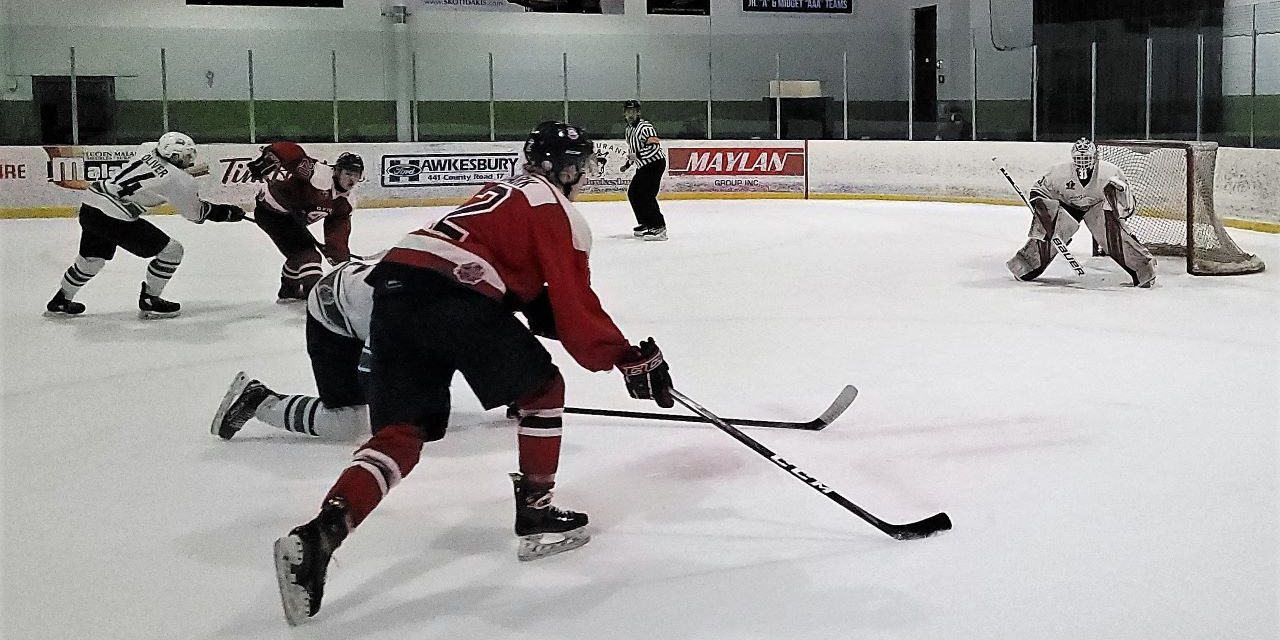 The Hawkesbury Hawks took a 3-1 lead into the third period of Game 2 of the CCHL’s Bogart Cup finals, but were unable to hold off a furious Ottawa comeback that led to an eventual 4-3 overtime loss. Photo: Reid Masson

It has come down to crunch time for the Hawkesbury Hawks in their Central Canada Hockey League (CCHL) Bogart Cup finals against the Ottawa Junior Senators.

With Game 4 set for Tuesday night (May 10) at the Robert Hartley Sports Complex in Hawkesbury, the Hawks will be looking to climb the first step back into the series, after losing by one goal to Ottawa in each of the first three games of the finals. Game time is 7 p.m.

“We feel like we’ve been in every hockey game,” said Hawks Head Coach Rick Dorval, adding the team will make some adjustments for Tuesday’s game. “We need a bounce, and an extra save here and there would definitely help.”

“We’re staying positive and staying focused on playing one game at a time and hopefully we can pull ourselves back into this series.”

Both teams have played great hockey in the CCHL finals, with the first two games going to double overtime before Ottawa’s Philippe Jacques scored the game winning goals – in double overtime in Game 1 and then a spectacular goal in Game 2’s overtime period. The Hawks led Game 2 by a score of 3-1 in the third period, before Ottawa roared back with two goals to send the contest to overtime. They also jumped out to an early 2-0 first period lead in Game 3 in Ottawa on Sunday (May 9), before eventually falling 4-3.

“They’re a resilient bunch,” Dorval said in praise of the Junior Senators coming back from two goals down twice so far in the series. “We just have to find a way to close it out.”

Another game decided by one goal and another game that the Ottawa Junior Senators came back from two goals down to win and take a commanding 3-0 series lead over Hawkesbury.

Vincent Velocci, Simon Isabelle, Braxton Ross, and James Taylor scored the goals, while William Desmarais made 28-saves as Ottawa won their third straight of the series to go up 3-0 on Hawkesbury.

The Hawks had two goals from Josh Spratt and a single from Antoine Dorion, while Matthew Tovell finished with 30-saves on the losing end of things.

Philippe Jacques netted the overtime winner for the second straight game, while William Desmarais made 30-saves as Ottawa took a 2-0 series lead with the win in front of Hawkesbury’s home crowd at the Robert Hartley Sports Complex.

Hawkesbury had goals from Jakson Kirk, Jeremy Tremblay, and Max Klanow, while Matthew Tovell made 31-saves in the losing effort. The Hawks led 3-1 in the third period, before Ottawa stormed back with two goals late in the frame to force overtime.

Philippe Jacques was the double overtime hero with a beautiful individual game-winning goal, while William Desmarais finished with 35-saves as Ottawa took a 1-0 series lead in the Bogard Cup Championship series, taking Game 1 of their Bogart 5-4 in double overtime.

Hawkesbury had goals from Rylee Hlusiak, William Gendron, Jeremy Quesnel, and Eric Chamandy, while Matthew Tovell made 25-saves in the loss.