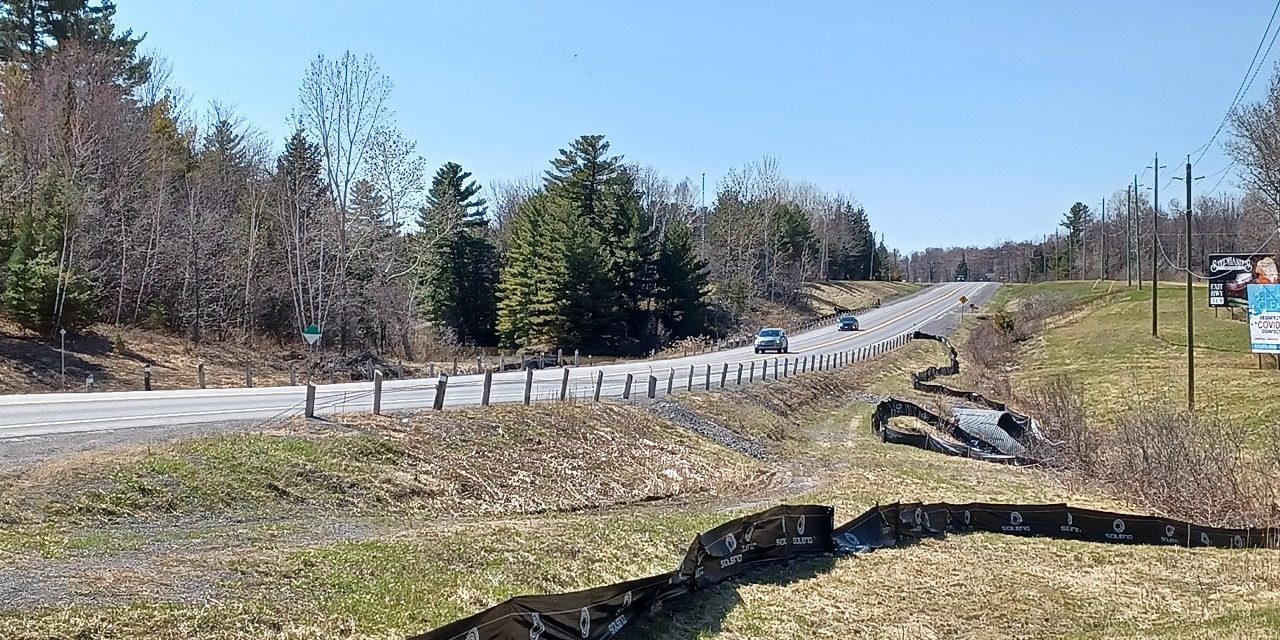 Environmental barriers to protect drainage and wildlife during construction have already been installed at a site along County Road 17 near the East Hawkesbury Airport where a large culvert will be replaced. UCPR Council has deferred approving the construction contract so more discussion may take place about the proposed detour routes while the road is closed for four weeks. Photo: James Morgan

A detour around a construction project on a major county road was the source of considerable discussion when United Counties of Prescott and Russell (UCPR) council met on April 27.

A project to replace two culverts on County Road 17 near the East Hawkesbury Airport will result in four-week closure of the busy section of highway between Tupper Street in Hawkesbury and the intersection with Golf Club Road and Dandy Road.

Due to concerns about the four-week road closure and significant detour routes, council decided to defer approval of the contract and the detour routes until it meets again in May.

According to a report from Director of Public Works Jérémie Bouchard, $1,750,300 had been allocated for the culvert project in the 2022 budget. However, the only tender received to do the work was from Arnco Construction for $2,174,388.

An engineering consultant’s review for the UCPR by HP Engineering found that the increased cost was due to the staging of the project and that it would cost more to do the work while keeping the road open. With one lane controlled by a traffic light, it would take 10 weeks, rather than four weeks if the road was completely closed. The cost to complete the culvert replacement in four weeks with the road entirely closed is $1,366,990 – $729,000 less than if the road was to remain open – and would have resulted in the cancellation of other road projects in 2022 in order to cover the budget shortfall.

Bouchard said discussions are taking place with the affected municipalities about the detour routes for both local and through traffic.

“I want the chance to talk with my council about this,” said East Hawkesbury Mayor Robert Kirby, due to concerns about detour traffic following municipal roads.

Alfred and Plantagenet Mayor Stéphane Sarrazin noted there are already traffic dangers in the area, due to vehicles traveling at high speeds near Gourley Road and the connection to Highway 417.

Bouchard said the detour routes can be amended.

Environmental barriers to protect drainage and wildlife during construction have already been installed at the site.

Kirby moved to defer approving the contract and detour route to the next UCPR council meeting. The motion was seconded by Clarence-Rockland Mayor Mario Zanth and was carried.