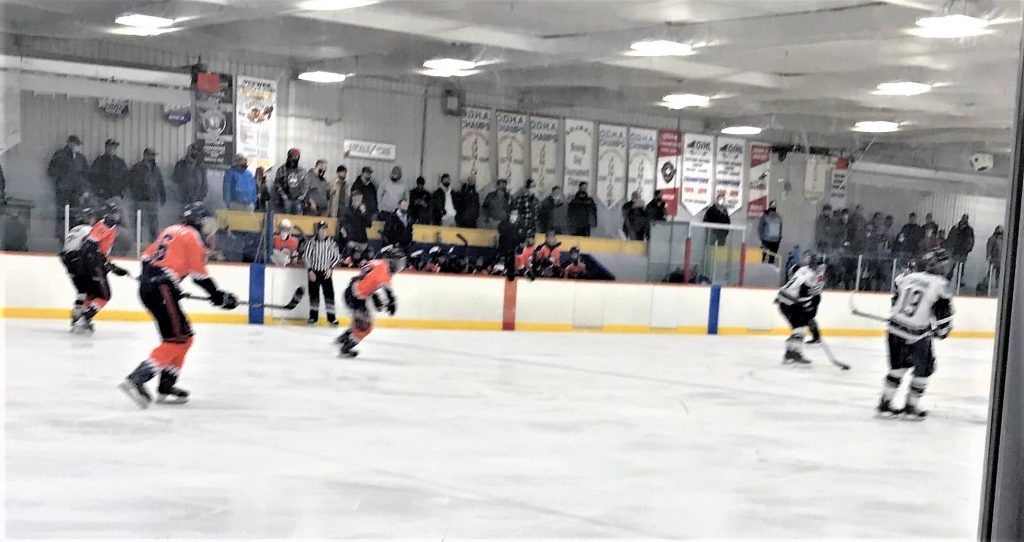 The Clarence Castors topped the Gatineau-Hull Volant 3-0 to win their NCJHL semi final series four games to three in front of a packed arena in Clarence Creek. Photo: Mac Hinton

They put a scare into their fans, but goaltender Corey Camirand and the Clarence Castors came through when the chips were down at home on Sunday (March 20), shutting out the Gatineau-Hull Volant 3-0 to win Game 7 and move onto the National Capital Junior Hockey League finals.

The Castors defence and Camirand – the NCJHL’s Most Valuable Player during the regular season – completely shut down the Volant to take home a tight series that seemed in the bag just a week ago. The Castors won the first three games of the series, before losing 4-1 in Game 4 to Gatineau on Sunday, March 13.

Clarence had the chance to close the series out in Game 5 at home on Thursday, March 17, but fell 3-2 in overtime, in a game where Gatineau-Hull controlled most of the play in the second and third periods. The following night’s game in Gatineau was even more exciting, with the two teams going to double overtime, before the Volant scored to take the win and send the series to Game 7.

The Castors looked to be in trouble in Friday’s game. Gatineau was the faster team, they controlled most of the play, and even had a goal called back, as the referee meant to blow the whistle before the puck entered the net. The goal in overtime was off a faceoff to the point, maybe a rebound in front – it happened so fast. Gatineau had more jump and speed to their game and faster legs than Clarence did.

On Sunday in Game 7, the Castors found their legs and made sure the game was never in doubt, jumping out to 1-0 and 2-0 period leads, before salting the contest away in the third. Cayden Martin, Philippe Plante and Jacob Servant were the goal scorers for Clarence.

But the stars of the game were the Castors defence and the play of Camirand, who effectively shut the door on the Volant’s chance to steal the series after falling behind 3-0. Clarence played a solid game at both ends of the ice, with the defence keeping the area in front of the Castors net clear and preventing the Volant from going to the net and screening Camirand. The Volant played well too. It was a good hockey game.

Clarence now moves into the NCJHL finals, where they will face the South Grenville Rangers.

Over on the other side of the NCJHL’s two semi-final series, the South Grenville Rangers spoiled my seven-game prediction of last week, winning both of their games against the North Dundas Rockets to take the series four games to two and move onto the finals against the Clarence Castors.

The Rangers took the series on North Dundas home ice on Sunday, March 20, winning 3-2 to sew up the semi-finals and book a date with Clarence. South Grenville led 2-0 after the first and second periods, before North Dundas staged a comeback in the third period. The Rangers were able to hang on to take the 3-2 win and break the hearts of Rockets fans in attendance.

Penalties and the power play were a big story in Game 5 at the Cardinal Arena, where the Rangers took a 4-3 win at home to put themselves one game away from eliminating the Rockets. Five of the goals scored in Game 5 were power play goals -three for South Grenville and two for North Dundas.

South Grenville is going to have to clean up the team’s short-handed play against the high-powered offence of Clarence.

It should be a great final series!

The South Grenville Rangers will host the Clarence Castors in the first game of the NCJHL finals this Saturday, March 26, at the Cardinal Arena. Game time is 8:10 p.m.

The two teams will meet again less than 24 hours later (Sunday, March 27), when the Castors will have home ice at the Clarence Arena for Game 2, which starts at 4 p.m. Clarence will again be the hosts for Game 3 on Tuesday, March 29, which will have an 8:20 p.m. start time.

The following weekend, on Saturday, April 2, South Grenville will host Game 4 at the Cardinal Arena, with a start time of 8:10 p.m. If necessary, the two teams will play Game 5 on Sunday, April 3, at the Clarence Arena, beginning at 6 p.m. The schedule for Games 6 and 7, if they are required, has not yet been released.