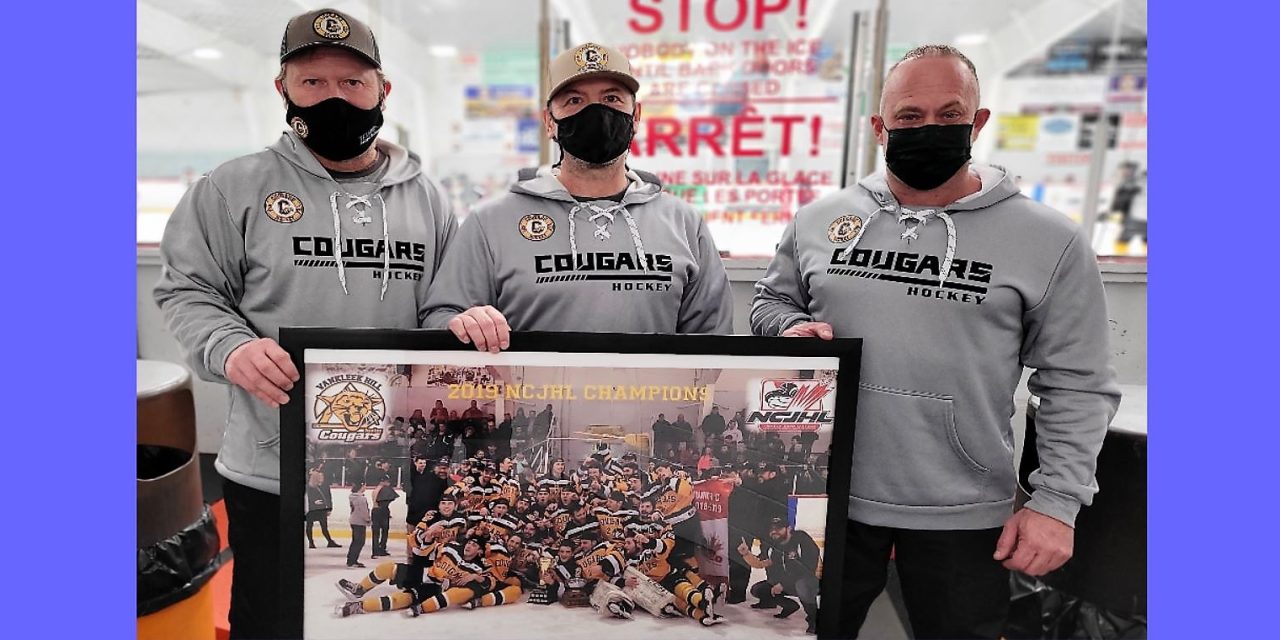 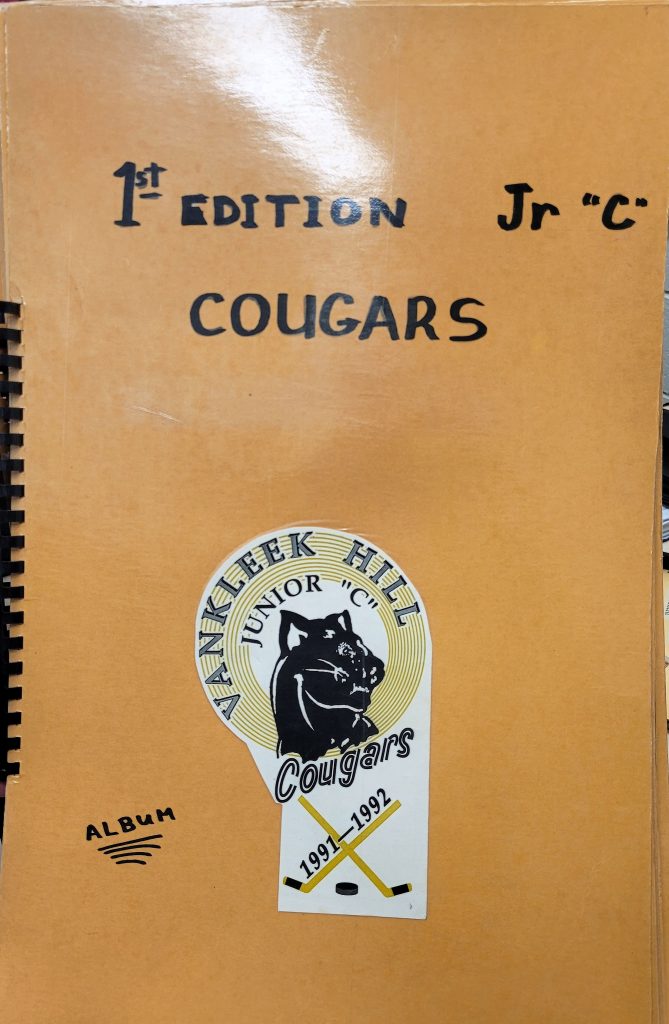 The 2021-2022 National Capital Junior Hockey League (NCJHL) season has been a special one for the Vankleek Hill Cougars, with the team celebrating its 30th anniversary. But as when it was founded, the team’s focus remains on the players and community before hockey.

“Our mentality is school, work, then hockey,” explains Cougars co-owner Franky Dopelhamer, who has been the head coach of the Junior C team for the past four seasons. “We coach that school and work is priority – that’s going to be their lives afterwards.”

“Hockey is just part of life and having fun.”

Dopelhamer joined the Cougars as head coach for the 2018-2019 season, along with fellow co-owner Greg McEachern, who continues to serve as one of the team’s assistant coaches. The Cougars were going into the season without a coaching staff and Dopelhamer was asked by his son, who was playing on the team, to help out.

“That year was my son’s last year as a 21-year-old,” Dopelhamer recalls. “There was no coach and rumors that the team might not ice that year.”

After coaching the team to the NCJHL championship in their first season with the team, Dopelhamer, McEachern and a third partner decided to purchase the Cougars. Carl Bougie, who had been coaching with the St-Isidore Eagles, joined the two as a co-owner of the Cougars last summer, also coming on as an assistant coach.

“It was a good choice I made,” Bougie says. “They were already well organized before I got here.”

The three co-owners share the view that the local Junior hockey team’s most important role is to be a part of the community. That role includes providing Vankleek Hill with a local team to follow – something very important to a small town.

“One of the objectives is keeping the kids around after they go to college and university,” McEachern says. “There is something here in our hometown.”

“You don’t necessarily want to go the school and then live in a place like Montreal or Ottawa. The Cougars are part of us growing up here.”

The makeup of the team’s lineup each season reflects the community as well. The team has 17 players on the 2021-2022 roster who are from Vankleek Hill or the immediate area. With so many locals, the team has accumulated a large alumni following its games.

“Lots of good hockey players have come through the Cougars,” Bougie remarks. “(If you look at players throughout the league) lots of those guys could play Junior A, but they just want to play for their hometown.”

Some players also prefer to play Junior C at home rather than go through the intensity of Junior A hockey, which has more practices, games and travel. The games themselves are just as competitive as the higher-tiered leagues.

“People are paying to see us play,” Dopelhamer notes. “We have to perform.”

“The players that played Junior A and come here to play Junior C expect to dominate, but it’s far from that,” adds McEachern. “It’s a great league – it’s very competitive.”

But most importantly, the NCJHL and the Cougars are local.

“We represent the people of Vankleek Hill,” Bougie emphasizes. “Everyone one who comes to a game is a parent, or aunt, or uncle.”

Local players had no place to play

Having a place for local players to play was one of the main reasons the team’s founders pursued bringing a Junior hockey team to Vankleek Hill says former Champlain Township Mayor Gary Barton, a town councillor at the time and part of the group which formed the Cougars just before the start of the 1991-1992 season.

“We originally started because people like my son Steven had no place to play.” recalls Barton, who regularly attends home games and joined other founders of the Cougars at the team’s 30th anniversary celebration on February 5. “(The current owners) are doing well and good for them.”

“They have a good group of kids and they’re working well with them.”

The Cougars would love to be entirely composed of local players, but are sometimes forced to bring in a player from out of town to ensure the team is competitive.

“It’s getting harder and harder every year to get local players, because minor hockey doesn’t have the volume (of players) it used to,” Bougie says.

Vankleek Hill finished in fifth place in the NCJHL standings this season and is currently in the midst of an epic playoff battle with the fourth place Gatineau-Hull Volant in the first round of the playoffs. The Cougars bounced back in the series with a 2-1 victory at home on Saturday, February 19, after dropping a heartbreaking 6-5 overtime loss in Gatineau the previous night. The two teams will meet again twice this weekend, first in Gatineau this Friday (February 25) and then in Vankleek Hill on Saturday evening, February 26.

A young team, the Cougars have steadily improved during the season and the team’s coaches are hoping for a long run in the post season.

“Anything can happen in the playoffs,” Bougie notes.

The team hopes to have a full house in the Vankleek Hill Arena on Saturday for the fourth game of the series with Gatineau-Hull.

“We want noise,” Dopelhamer says. “When there’s a large crowd and noise and atmosphere it’s a good feeling.”

“When the kids see a big crowd, players want to come play in Vankleek Hill.” 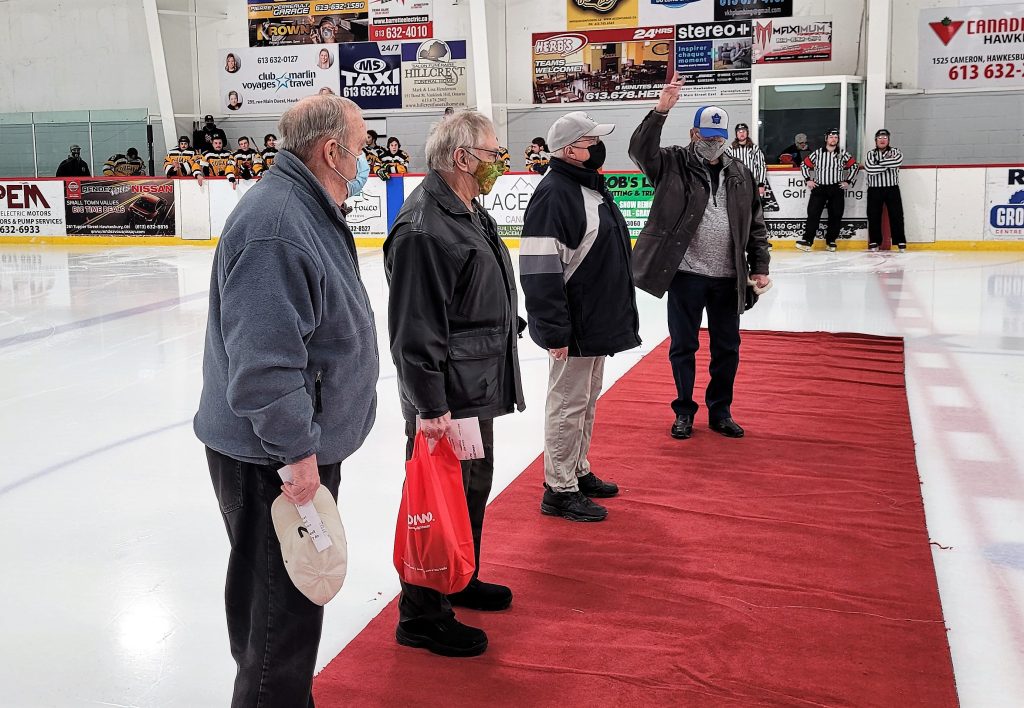 The Vankleek Hill Cougars honored the team’s builders at a special ceremony before the team’s home game on February 5. Left to right: Ian MacRae, Charlie Berniqué, Gary Barton and Joe Kelly each took their turn acknowledging the cheers of the home crowd as they were introduced. Photo: Reid Masson