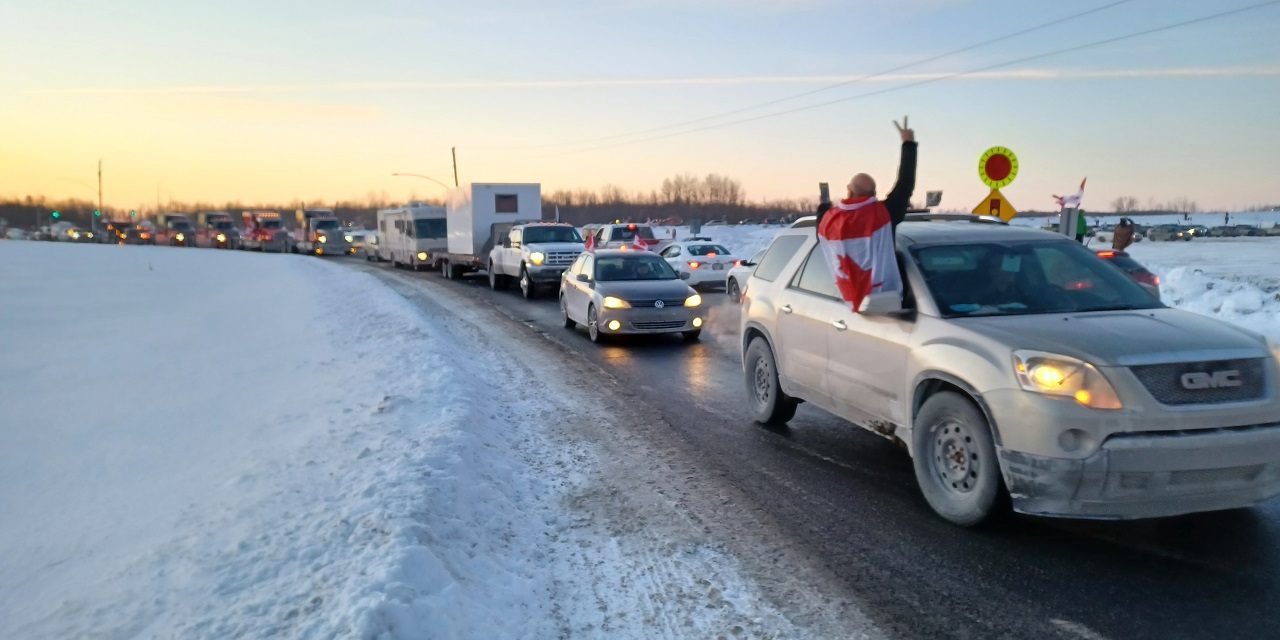 The Freedom Convoy began arriving on Highway 417 in East Hawkesbury at around 3 p.m. on January 28. At least 200 people were gathered on the overpass where Grande Montée crosses Highway 417 at the Ontario-Québec border.

The convoy has been gathering momentum on highways across Canada during the past week, initially as a way of protesting the vaccination mandate for truck drivers crossing the Canada-US border, but it has since become a protest against all COVID-19-related public health mandates and for many, an opportunity to express dislike for Prime Minister Justin Trudeau and the federal government.

Convoy participants from Québec and the Atlantic provinces used Herb’s Travel Plaza at the interchange of Highways 417 and 34 near Vankleek Hill as a meeting point on Friday, January 28. They are spending the night before continuing to Parliament Hill in Ottawa Saturday morning to join other groups from across the country.

East Hawkesbury residents supporting the convoy had planned to gather beside the highway at the nearby Ontario Travel Information Centre, but the Ministry of Transportation decided to close access to the facility. The entrance was blocked with pylons and a road closure sign.

The organizers were disappointed that access to the travel information centre had been blocked. They said the Royal Canadian Mounted Police (RCMP) had visited them earlier Friday morning and left. The Ontario Provincial Police (OPP) had allegedly told them that they could gather as long as they did not obstruct traffic.

While the convoy supporters waited on the overpass, an RCMP vehicle passed underneath and when its driver sounded the horn, andthe crowd cheered in response.  OPP and Sûreté du Québec vehicles periodically crossed the bridge or travelled underneath on the highway.

The organizers, who were particularly critical of how local and national media outlets have covered the convoy, emphasized the reason they believe the convoy is occurring and why they are supporting it.

“To lift all mandates coast to coast,” said Barrett.

The mandate they particularly oppose is the requirement to show proof of vaccination at certain retail establishments and services. They described vaccination information as “deeply personal information,” that should only be shared between an individual and their doctor and not “some 18- or 19-year-old” employee. Concern over the QR codes used to indicate proof of vaccination was also mentioned.

A smaller crowd of convoy supporters also gathered on the overpass where County Road 10/Barb Road crosses Highway 417 between Vankleek Hill and St-Eugène.

“We’d like to get the mandates lifted,” said Gauthier. He added they have not been able to shop at their nearest Walmart store, which is in the US, for two years.

Carter, who is originally from near Concord, New Hampshire, said she has not seen her family since Christmas, 2019 and added it is difficult because both her father and grandmother are ill.

Gauthier said he is vaccinated and still travels to the US to do his job.

Gauthier said the couple was planning to visit their American relatives this past Christmas but had to cancel when the federal government restored the mandatory COVID-19 test requirement for Canadians returning home.

Many of the convoy supporters are mistrustful of journalists or are reluctant to be identified by name. A couple from Moncton, New Brunswick joined the convoy in Rivière-du-Loup, Québec.

“This is a once-in-a-lifetime opportunity to stand up for the freedoms and rights of all Canadians with no division, period,” said the man.

Since the pandemic began, the couple has been carrying on without observing any COVID-19-related mandates and restrictions. They have not worn masks once to go shopping or pick up take-out food.

“We are the example to show you can still live without mandates,” said the man.

He is self-employed and she works from home. They have arranged to have all deliveries and pick-ups made outdoors or curbside.

He believes a mandate is something an individual only must follow only if they consent to it.

“Everybody just assumes they have to.”

The couple acknowledged not everyone among their family and friends agrees with them.

At Herb’s on Friday afternoon, not all expressions of support for the convoy were positive. Many flags, writing, and illustrations on signage and vehicles gave a specific instruction to Prime Minister Trudeau and Québec Premier François Legault.

Other volunteers at Herb’s were taking a more community approach in their support. People were staying warm in the –15 Celsius temperatures around barbecue grills and wood stoves. A woman from Vankleek Hill and a woman from Hawkesbury, who did not want to be named, were carrying around a large pot of baked beans and serving them to truck drivers. A tent set up, where food was available and there was registration for overnight accommodation in local homes for truck drivers who did not want to spend the cold night in their rigs.

The Freedom Convoy is to leave Herb’s Travel Plaza at 10:30 a.m. Saturday and go west on Highway 417 to Ottawa. 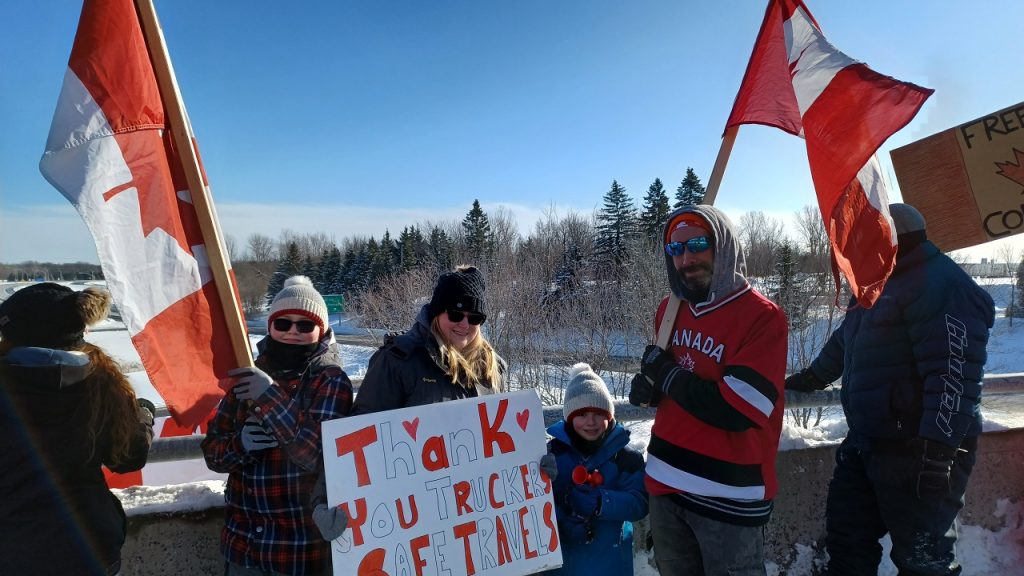 Samuel Barrett, Wendy Iadeluca-Barrett, Jackson Barrett, and Jason Barrett on the Grande Montée overpass by Highway 417 at the Ontario-Québec border where they supported the convoy. Photo: James Morgan 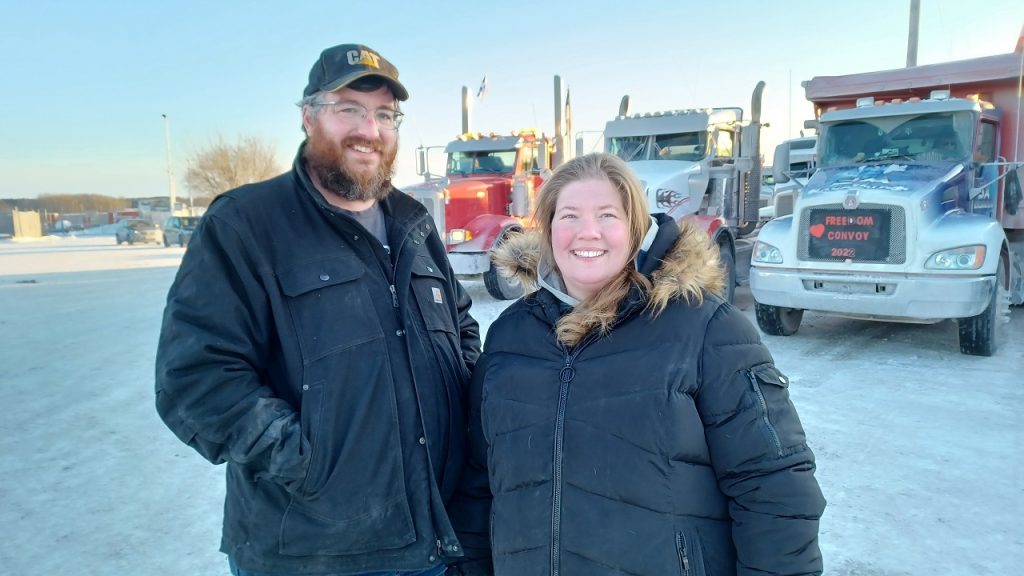 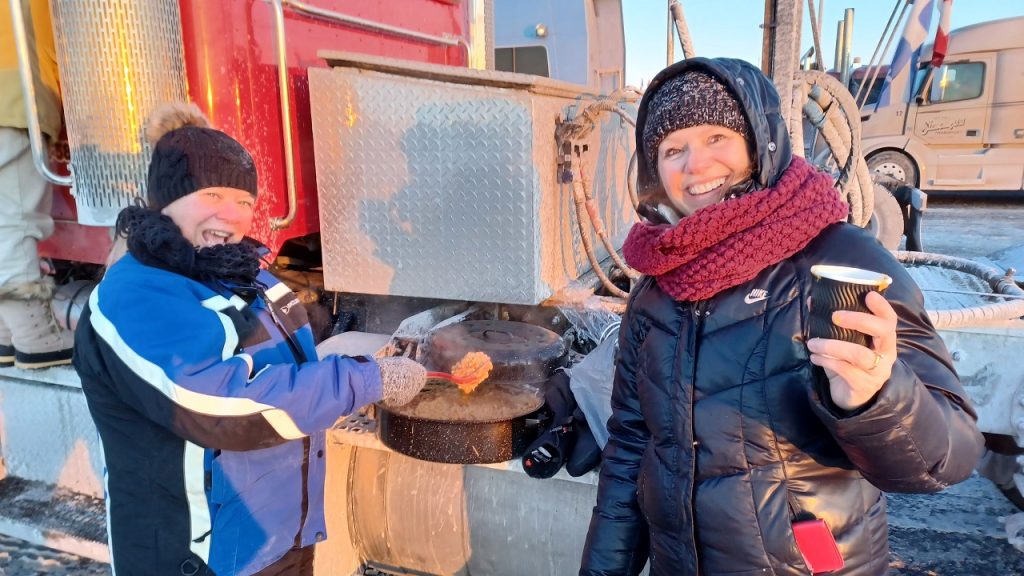 A woman from Hawkesbury and a woman from Vankleek Hill served baked beans to truck drivers taking part in the convoy who were parked at Herb’s Travel Plaza. Photo: James Morgan 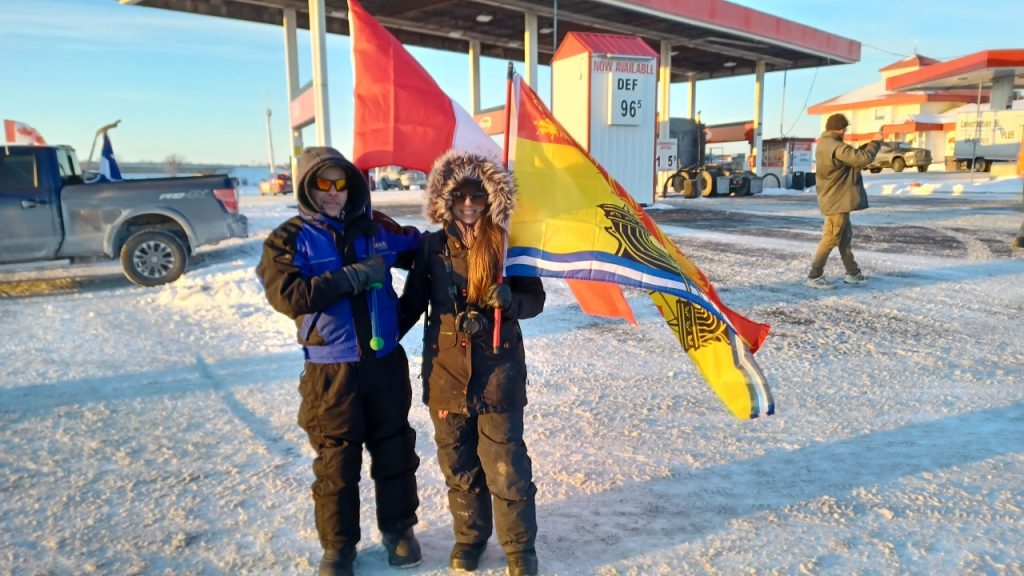 This couple from Moncton New Brunswick say they have lived without following any pandemic-related mandates for two years. Photo: James Morgan 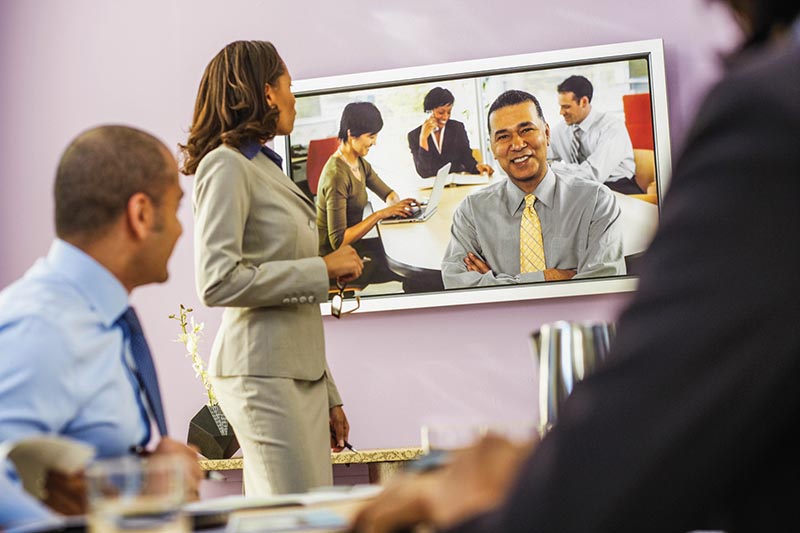 Largest ever in region: Business summit in Alfred March 22 and 23