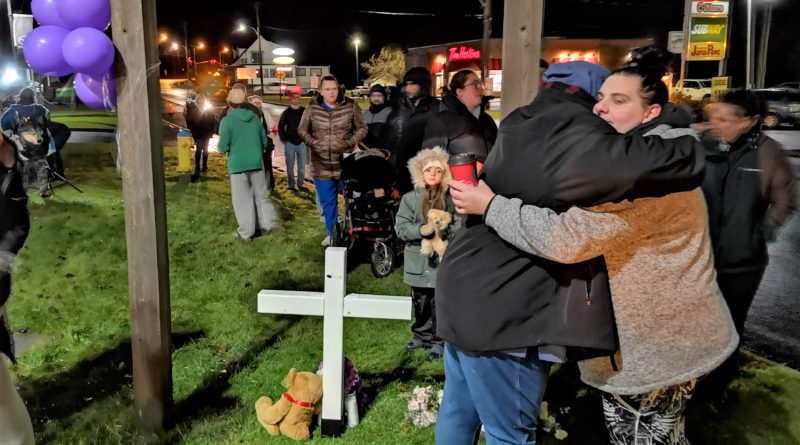 Jessica Girard (right), sister of Mélissa Girard, is comforted at a memorial held on McGill Street in Hawkesbury on Thursday evening, November 18. Mélissa was killed after being struck by a vehicle while crossing McGill on November 12. PHOTO: REID MASSON

Family and friends gathered on McGill Street in Hawkesbury on the evening of Thursday, November 18 in memory of a young mother killed after being hit by a vehicle last week.

Mélissa Girard died after being struck while crossing McGill on her way back from purchasing a coffee at the Tim Horton’s outlet. Girard, 27, was pronounced deceased at 2:34 a.m. on Saturday, November 13, at the Ottawa Civic Hospital after being transported there following the collision, which occurred at approximately 8:20 p.m. on November 12.

On Thursday evening at 8:20 p.m. Girard’s family placed a small white cross at the spot where the young mother of an infant son was hit. Several dozen people joined Girard’s siblings and parents, including her seven-month-old son Zackiël. Those in attendance comforted the family, and each other – leaving flowers, stuffed animals and other items in her memory.

A gofundme page has been set up to help cover the costs of a funeral for Mélissa, and to help care for her young son. The family requires funds for a funeral and to help support Zackiël, as they await government assistance to be provided for the infant. The page had raised $3,786 of its $10,000 fundraising goal as of November 19.

The section of McGill Street where Girard was struck is heavily travelled, as it is the main route through Hawkesbury towards the Long Sault Bridge, which takes motorists across the Ottawa River from Ontario to Quebec. Several people at the memorial on November 18 commented about the lack of sidewalks for pedestrians along the portion of the street where the accident occurred.