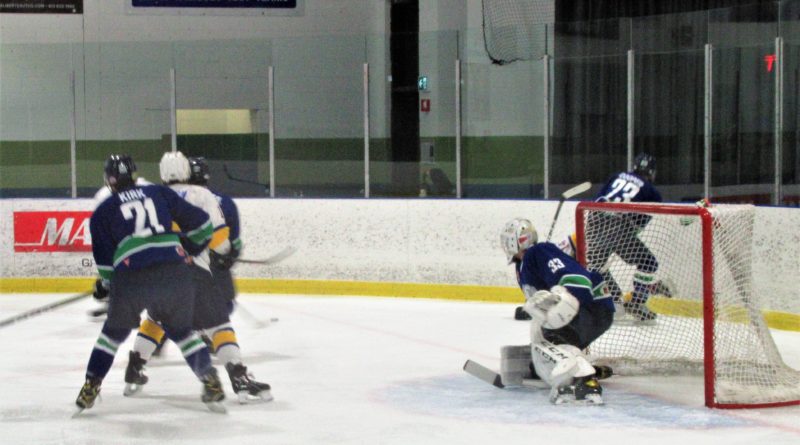 Hawks forward Jason Kirk (21), goaltender Dimitri Pelekos (33), and defenceman Mark Cooper (23), work to clear the puck out of their own end during the team's 3-1 win over the Carleton Place Canadians on Friday, October 1. Photo James Morgan

The Hawkesbury Hawks rebounded from a tough start to the season, with a pair of wins over the Carleton Place Canadians last weekend.

The Hawkesbury Junior A squad came back from a 1-0 deficit to the Canadians going into the third period of last Friday’s (October 1) home game, with goals coming from Rylee Hlusiak and Josh Spratt just over a minute apart. Eric Chamady added an empty net goal with two seconds remaining to seal the 3-1 victory.

In Sunday’s rematch, the game was again close, with the Hawks clinging to a 3-2 lead going into the third period, before firing home three goals in the final frame to take a 6-2 win. Jason Kirk scored two goals for the Hawks in the win, while single tallies were added by William Gendron, Jeremy Quesnel, Michael Andrews and Josh Spratt.

Before the two wins on the weekend, the Hawks had been in a three-game losing streak to start the season, after dropping a heartbreaking 1-0 decision to the Cornwall Colts on Thursday, September 30. The Hawks outshot the Colts 37-16 at the Ed Lumley Arena in Cornwall, but were stymied at every turn by Cornwall netminder Alex Houston, who was named the game’s first star.

“We deserved to win that one, but sometimes that’s how it goes – that goaltender was unbelievable that night,” Dorval said.

The Hawks were bolstered over the past two weeks by members of the community stepping up to offer homes to out-of-town players, after the team had difficulty in finding spots at the start of the season. With enough living spaces now available to billet players, the Hawks have added several new faces to the squad, including two players from the United States.

“We can’t thank the people who stepped up enough,” Dorval said. “It’s a huge help to the team and the fans.”

With the two victories, the Hawks moved out of the basement and into eight place in the Central Canada Hockey League (CCHL) standings. The Hawks will be hoping to add to their momentum after the weekend pair of wins, as the team has a busy schedule coming up, with three games over three days Thanksgiving weekend during the CCHL’s annual Fall Showcase at the Bell Sensplex in Kanata.

The annual showcase will see CCHL teams play in Kanata from October 9 to 11, as they get the chance to show their skills to scouts from NHL teams, colleges and junior squads throughout North America. All 12 teams will play out of Bell Sensplex in Kanata.

“Usually there are about 90-100 scouts from NCAA, Major Junior and the NHL, so it’s a big event,” Dorval noted.

Hawkesbury is the visiting team against Rockland on Saturday, October 9, as they face the winless Nationals in an afternoon game beginning at 1:15 p.m at the Sensplex. The Hawks will then be the home team against the 1-3 Smiths Falls Bears on Sunday afternoon, beginning at 3:15 p.m.

On Thanksgiving Monday, October 11, the Hawks will be the home team against the Brockville Braves in a late morning contest at the Sensplex beginning at 11:45 a.m.