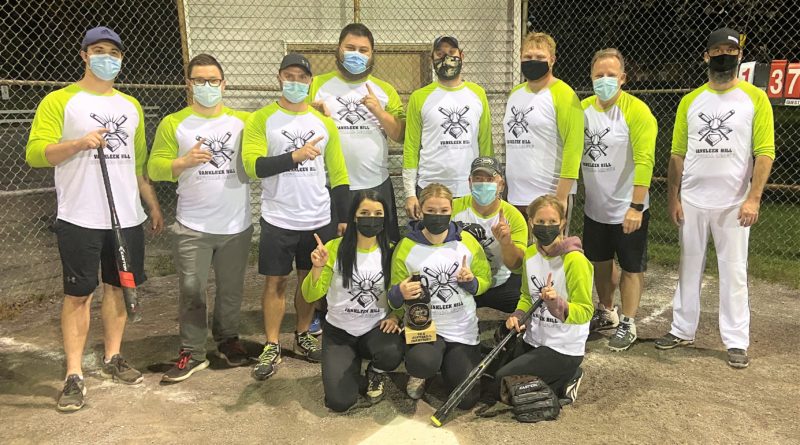 The Green team's players celebrate after their 4-1 victory over the Grey team in the championship game for the Vankleek Hill Softball League on Thursday, September 30. Submitted photo

The Vankleek Hill Softball League wrapped up a successful season on Thursday, September 30, with its championship game held before an enthusiastic crowd on a beautiful evening at the Vankleek Hill ball diamond.

The Green team defeated the Grey team 37-31 in a high-scoring and hard-fought final, in which the lead switched back and forth several times. It was a very tight game, with the Green squad coming from behind in the final few innings to take the season championship.

Both teams had reached the finals with victories on Tuesday, September 28, in the semi finals. The first place 9-1 Greens defeated the fourth place Black team, while the third place Gray team upset the second place Orange team to earn its berth in the finals.

The exciting finals capped a rollercoaster season for the mixed softball league, which includes male and female players. After a delayed start to the season due to the COVID-19 pandemic, play finally began in mid-July. Since then, seven teams of 14 players played regularly each week on Tuesday and Thursday evenings.

With interest having grown as the season progressed, organizers expect to be able to add an eighth team to the league in 2022. Eight teams would allow two games to be played on Tuesdays as well and each team would be able to play every week.

Anyone seeking more information, or who wants to sign up to play softball in 2022, can send an email to the Vankleek Hill Softball League at [email protected]. The group also maintains a Facebook Page.