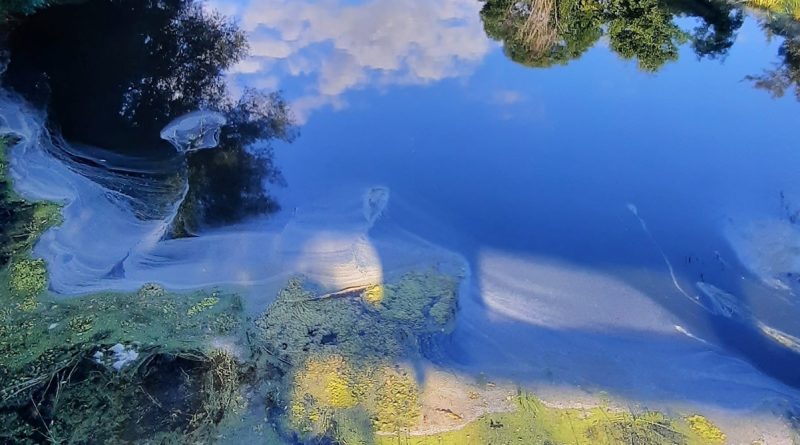 Chris Brown took this photo of the Rigaud River behind his home in St-Eugène.

Officials with Ontario’s Ministry of the Environment, Conservation and Parks (MOE) are still awaiting water sample test results to determine the cause of a large fish kill in the Rigaud River near St-Eugène.

“The ministry continues its work to determine the cause of the fish die-off in the Rigaud River,” said Adam Worth, Area Supervisor – Ottawa District, Ministry of the Environment, Conservation and Parks, in an email to The Review. “On two occasions, we have taken samples at several locations along the Rigaud River and surrounding area.”

“The results from both sets of samples are being reviewed by technical experts. These results will be evaluated to determine if there were any additional contributing factors to the fish die-off and observed discolouration of the Rigaud River.”

Christopher Brown, who has lived on his waterfront property on the river in St-Eugène for more than 30 years, contacted the ministry’s Action Centre on September 2 – the day after he first noticed a “sewage like” smell emitting from the river. Two days later he spotted the first of a large number of fish that floated to the surface over the next several days.

Worth said the ministry remains committed to sharing the results of the assessment to local public agencies including the Eastern Ontario Public Health Unit, the Township of East Hawkesbury, and the Ministry of Northern Development, Mines, Natural Resources and Forestry as soon as possible. The ministry has also been communicating with Ministère de l’Environnement et de la Lutte Contre les Changements Climatiques about this incident.

Residents of the affected area seeking more information are encouraged to contact the ministry’s Cornwall Office at 613-933-7402.

Brown said he has told the MOE that his main concern is to attribute a cause and put in measures to prevent the issue from reoccurring.