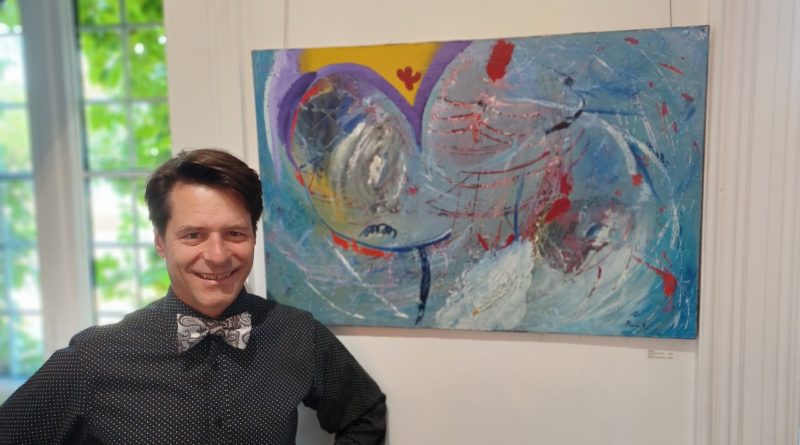 Renaissance man is a good term to describe Benoît Perrault, because of his artistic interests and passion for them. The Hawkesbury artist presently has an exhibition of his work at Le Chenail Cultural Centre.

Perrault was born and raised in Hawkesbury and began painting when he was in high school. His preferred paints are acrylics. He later studied architecture, lived in New York and Paris, but felt drawn back to his hometown. His work also includes drawing, photography, and sculpture.

Most of the 15 objects presently on display at Le Chenail by Perrault, are items he has created over the past 20 years. Virus, from 2001, is remarkably prophetic in its name and content, portraying the disruption a pandemic can — and has created for many people. Likewise, 2021’s Zeitgeist is the artist’s conception of the spirit of our present times.

Through the photos of Patatfritz, Perrault has used the process of making fried potatoes as a metaphor for a much darker episode in human history.

The painting Gourmandise, according to Perrault, is intended to portray the pleasure of food and indulgence in love. That description dovetails with Perrault’s assertion that art serves as an “embryo of life,” because love and food are part of creating and sustaining life.

Perrault and his art also have a common thread of home. Known as the ‘bowtie realtor’ in how he brands his professional pursuit, he facilitates the buying and selling of homes, creates art which can be displayed in homes, and does it all in his hometown.

“If more people just took the time to enjoy art, I’m sure the world would be a better place,” he remarked.

If we don’t face vaccine facts, the pandemic will continue