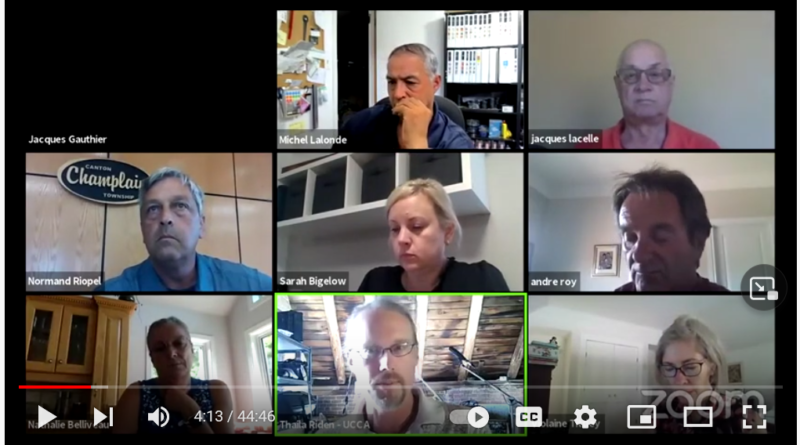 Champlain Township is being asked to present a resolution to the United Counties of Prescott and Russell requesting that the counties create a climate action plan. The request comes from a coalition of local environmental groups and concerned citizens. Left from bottom right are coalition volunteers Nathalie Belliveau and Thaila Riden who made a presentation to council during the township's committee of the whole meeting on Tuesday, August 31.

“We have a decade to turn things around,” says Thaila Riden.

At Champlain Township’s August 31 Committee of the Whole meeting, Riden and Nathalie Belliveau were two presenters appealing to the township as part of a counties-wide volunteer campaign to get municipalities to bring a motion the United Counties of Prescott and Russell (UCPR) requesting that the counties spearhead a climate action plan (CAP).

Their plea hit home. On September 9, the township approved a resolution asking the UCPR to create a climate action plan.

The “Coalition for Climate Action” wants the UCPR, which consists of the mayors of eight municipalities (Town of Hawkesbury, City of Clarence-Rockland, Russell Township, Champlain Township, Township of East Hawkesbury, the Township of Alfred-Plantagenet, the Village of Casselman and The Nation Municipality) to create a climate action plan.

The Coalition for Climate Action is a citizen-based group of volunteers and local environmental groups which are working together in various ways to encourage the creation of local climate action plans.

In a presentation to Champlain Township’s Committee of the Whole meeting on August 31, the coalition pointed out that the Township of Russell is developing a climate action plan. Climate action plans already exist in Ottawa, Kingston, Port Hope, Trent Lakes, Kawartha Lakes, Peterborough County and Haliburton County, according to a list provided by the coalition.

The draft resolution provided to Champlain council asked for the UCPR to join the Partners for Climate Protection in 2021, to commit to creating a climate action plan for both corporate and community sectors by 2023 and to establish a working group that includes representation selected on the basis of multidisciplinary expertise (including traditional indigenous knowledge, citizen, township and county employees) to support the creation of a Climate Action Plan

The coalition is presenting its request to all eight municipal councils in Prescott Russell and has already presented to East Hawkesbury councillors.

“The reception there (at East Hawkesbury council) was good. I think people don’t know what to do exactly. We don’t have all the answers, but we need to work together to find them. We need to develop a road map …. or plan,” said Riden.

“Where were you during Colacem?” asked Roy, who said that Champlain Township has been concerned about the environment for some time and has voted against the plant. Roy said he had not seen the coalition at any of the meetings related to the cement plant.

Belliveau answered that the group had been formed in March of this year and that its mandate was to get the counties to develop and Climate Action Plan which is needed because of climate change. Relatively new to the area, Belliveau said she became involved at the community level in Alfred-Plantagenet.

Roy re-directed his question to Thaila Riden, asking what the coalition plans on doing now that the Colacem cement plant is coming to the region.

Riden replied that a climate action plan, with emissions targets and overall strategies that have to be met, will affect industries and that the coalition was looking at the agriculture sector as well.

“There is a lot of work to be done to get to zero emissions,” Riden said. The over-arching goal of the coalition is to unify municipalities with a plan, Riden continued, adding situations similar to the Colacem cement plant “could crop up again.”

Belliveau pointed out that economic development and the environment go together, when often they are not connected in discussions.  A climate action plan would set out guidelines to encourage industries to be good environmental citizens, she said.

Longueuil Councillor Violaine Titley asked to make a statement. Titley said that the UCPR did a great disservice to Champlain Township when it approved the zoning change that would allow the cement powder plant to be located here.

“Cement production is responsible for six per cent of the CO2 emissions globally and we’re going to have one of those right here in our small Township of Champlain. It’s very wrong,” Titley said. “People look to their local government to make the right decisions. It’s very sad,” she ended.

The coalition continues to recruit members and signatures for a petition. Anyone wishing more information, or who wants to sign the petition, can visit the EcoEast – EcoEst Facebook page https://www.facebook.com/ecoeastecoest.

“We have to start somewhere and we need to start having conversations,” said Riden.

louise has 1414 posts and counting.See all posts by louise