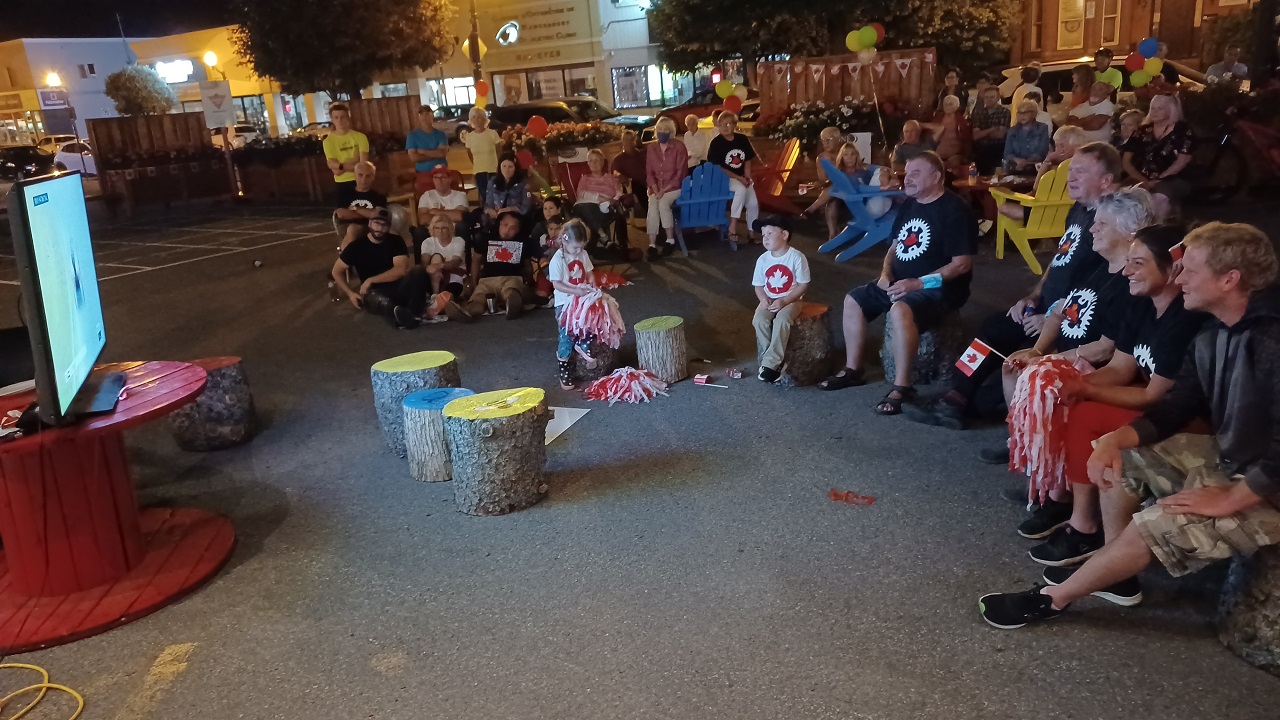 Family, friends, and other supporters gathered at the Green Beaver pop-up park in downtown Hawkesbury on August 30 to watch para cyclist Joey Desjardins compete at the Paralympic Games in Tokyo. Photo: James Morgan

Approximately 75 people gathered at the Green Beaver Space pop-up park in downtown Hawkesbury on the evening of Monday, August 30, to watch local paracyclist Joey Desjardins compete on television in the time trials at the Paralympic Games in Tokyo, Japan.

Desjardins, who lives in Champlain Township, placed 11th in the H3 Men’s time trials and was the first of the three Canadians to cross the finish line. Desjardins completed the trial in 46 minutes and 13.88 seconds, ahead of fellow Canadian Charles Moreau whose time was 47 minutes and 0.95 seconds. Walter Deberg of Austria placed first and won the gold medal, followed by Vico Merklein of Germany who won the silver medal, and the bronze medal went to Luis Miguel Garcia Marquina of Spain.

Joey’s wife Vanessa Desjardins watched the time trials at the downtown Hawkesbury event with the couple’s daughters Stella and Zayla. Vanessa was extremely happy with the results.

“Awesome! He did such a great job, we’re so proud of him,” Vanessa said after the race. “I think he’s going to be very pleased with the results.”

Joey’s father Michel was watching downtown and was visibly pleased with his son’s achievement in Tokyo.

“Eleven years ago, he had an accident, and look where he is now!”

Monday night’s downtown watching party was organized by the Hawkesbury Rotary Club. Free pizza and homemade cookies were served, children painted the Olympic rings with their hands for presentation to Joey when he returns home, and viewers could leave greetings of support on a message board.

The club’s Suzanne Hocquard said they were really pleased with the turnout on Monday night. The club has supported Joey Desjardins for seven years.

Joey Desjardins’ next competition in Tokyo is in the road race, which is set for 1:20 a.m. Eastern Daylight Time on Wednesday, September 1.