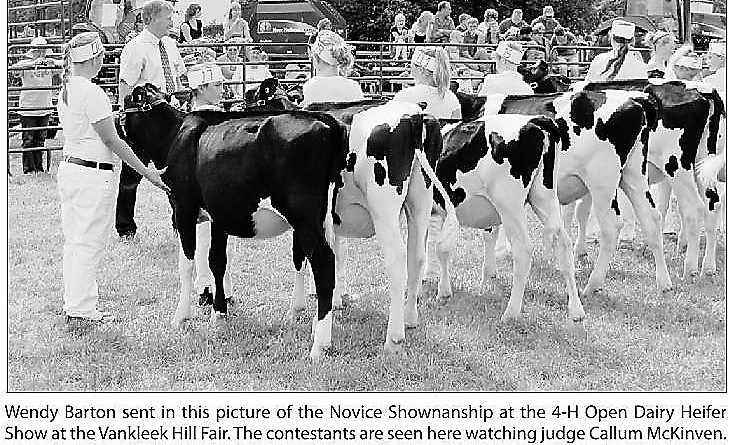 Photo of the Holstein Show from 2011 Vankleek Hill Agricultural Fair from the August 31, 2011, edition of The Review. Click on the photo for the full caption as it appeared in the original edition. Archive photo

10 Years ago
Serious collision inevitable
The Review, August 31, 2011 – VANKLEEK HILL – Ontario Provincial Police statistics indicate there have been nine motor-vehicle collisions at the intersection of Highway 417, Highway 34 and Tannery Road between September 2009 and August of this year. Despite a series of changes, including updated lighting beacons and signage, accidents are still occurring and local politicians are calling for more changes to the intersection.

25 Years Ago
Time up for Main Street meters?
The Review, September 4, 1996 – HAWKESBURY – Bowing to merchants’ ongoing complaints about parking meters, Hawkesbury council is considering removing the devices from Main Street. However town officials indicate they are not ready to eliminate the meters, which represent about $70,000 in annual revenues for the municipality.

50 Years Ago
Marijuana found in area cornfields
The Review, September 1, 1971 – ALEXANDRIA – Glengarry has long been noted as a land flowing with milk, cheese – and some honey. But it has gained a new notoriety for its crops of Glengarry Gold marijuana – found growing wild on 10 farms in the Alexandria and Dalkeith areas. The finds came after checks by Ontario Provincial Police and the RCMP.

75 Years Ago
102nd Annual VKH Fair to feature lively amusement
The Review, August 29, 1946 – VANKLEEK HILL – The 102nd Vankleek Hill Fair will take place on September 4-5-6. The Garden Brothers Show are a new attraction this year and will prove the best in many years. Their grandstand performance will be given by Specialty Dancer Ruth Gibbard, Zanoni the Magician, Novelty Balancing, acrobatic stunts by The Ripleys, Fifi the Clown, singing comedian Slim Burgess and pianist Ernie Barnes.

100 Years Ago
What The Review doesn’t tell
The Review, September 2, 1921 – VANKLEEK HILL – If the Eastern Ontario Review only gets credit for what it does not print each week in the same proportions to the blame we get for what we do publish, it would fairly even things up. Unfortunately our readers do not know what we do suppress. If however, we should publish many of the things we are asked to, there would be lively times in many otherwise pleasant households in this community. The editor knows far more about the actions of married men and married women than it is wise to disclose. So hereafter, when you happen to see an item in the Review that does not meet with your approval, just offer a thankful prayer that the editor did not say all he knows on the subject and give him credit for knowing enough to not say too much.

125 Years Ago
Five killed in Grand Central Hotel blaze
The Review, September 4, 1896 – VANKLEEK HILL – The most terrible calamity which has ever befallen Vankleek Hill occurred on Tuesday night when a portion of the Grand Central Hotel was burned and five people were cremated in the flames. The deceased included the wife of the hotel’s proprietor, a guest, and three domestic employees.