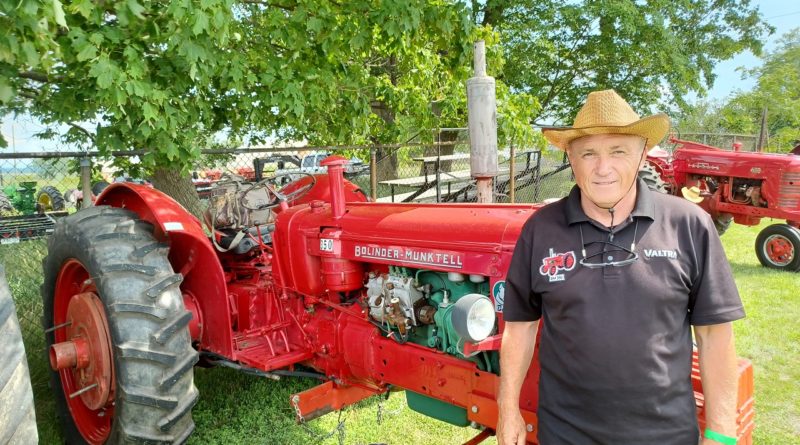 Farm tractors today are technologically complex machines. The tractors of the past, with their simple mechanics, agility, and added effects of agricultural nostalgia, are popular with collectors.

At the recent antique tractor pull in Sainte-Anne-de-Prescott, a few antique tractor owners shared their thoughts on why they enjoy collecting, repairing, and driving the vintage machines.

“It’s a passion,” explained Normand Bergeron, lives on a rural property in the St-Hermas area of Mirabel and owns five antique tractors.

At Sainte-Anne-de-Prescott, Bergeron was pulling with his 1958 Ford 601. The ancient tractor is a special edition and looks unique among Ford products because it has a red body and grey fenders. Many old Ford tractors had the opposite paint scheme, or were painted blue and white. According to its owner, Ford used to change the paint schemes of their tractors on an annual basis.

Jack Thomas of Coteau-du-lac had an extremely rare tractor at the Ste-Anne event. His 1959 Bolinder-Munktell 350 ‘Boxer’ was made in Sweden and is powered by a three-cylinder engine. The tractor is one of only two of its kind in all of Québec.

Thomas, who is originally from France, bought the tractor in his home country and had it shipped to Canada. He performed a full restoration on it that took two years over 2008 and 2009.

Bolinder-Munktell originated as a partnership in Sweden. The company was eventually sold to Swedish automaker Volvo. Like a Volvo automobile, the tractor is well-engineered and dependable.

“It’s very well-made and solid,” said Thomas, whose tractor collection is a bit larger than most.

The Bolinder-Munktell is one of 18 tractors Thomas has on his farm. Other notable items in his collection are Fordson – which were made by Ford – and Renault tractors from France. Unlike many collectors, Thomas’ tractors are not just for show or antique demonstrations. The avid collector regularly uses his vintage and antique equipment for farm work on his property.

Guy Vezina, of St-Jean-sur-Richelieu, attended the Ste-Anne tractor pull for the first time with his Oliver 770. He has owned the vintage tractor for 10 years and has not done any restoration work on it since he purchased it. Vezina, who also owns a 1958 IH Farmall 400, likes the nostalgia factor of antique tractors because he remembers them from his youth.

“I love tractors,” Vezina beamed before heading out to pull.

Nicholas Ranger, who lives in Finch, purchased his 1953 Allis-Chalmers WD45 tractor four years ago. He bought it as-is and did not do any restoration work on the tractor. Ranger said his interest in the tractors came from his father Luc, who has participated in antique tractor pulls for years.

Allis-Chalmers tractors had a bright orange paint scheme – one of the things Ranger said he likes the most about the machine.