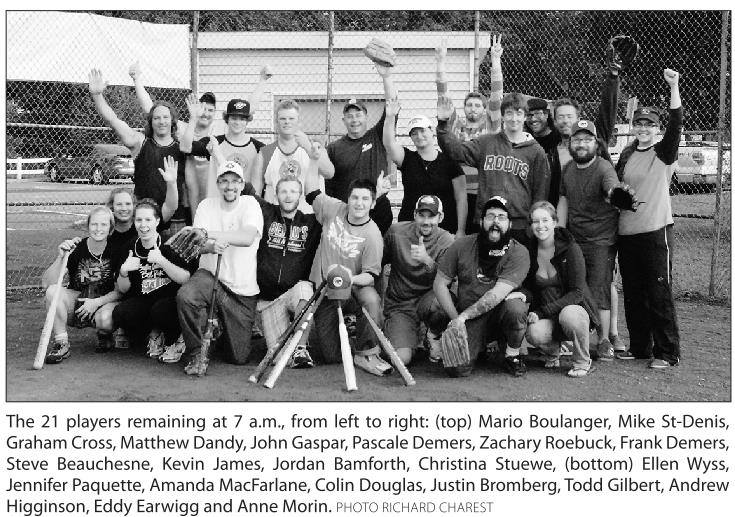 Players, organizers and sponsors who participated in the Vankleek Hill Softball All-Nighter to raise funds for Champlain Minor Sports in August of 2011. Click on the photo to see it in full size with the original cutline. Review Archive photo

10 Years ago
VKH softball all-nighter raises $4,000
The Review, August 17, 2011 – VANKLEEK HILL – Despite a sleepless night and a few injuries, the players, organizers and sponsors who participated in the Vankleek Hill Softball All-Nighter on August 13 were happy to learn the first edition of the community-wide effort paid off. The softball league will be donating $4,575.25 to Champlain Minor Sports for less fortunate youth in the town who cannot afford to sign up for sports. More than 40 players took part.

25 Years Ago
VKH Fair was first class
The Review, August 21, 1996 – VANKLEEK HILL – The history-making 152nd edition of the Vankleek Hill Fair is getting a first-rate ranking from organizers. “It was an excellent fair,” said Valerie Allen, who made history as the first female president in 152 years of the Vankleek Hill Agricultural Society. Despite an unscheduled lightning show on Thursday and a Friday downpour, attendance was comparable to the 1995 fair.

50 Years Ago
Dalkeith girl wins bursary
The Review, August 18, 1971 – ALEXANDRIA – Linda Lajoie of Dalkeith was announced as the winner of the Glengarry Memorial Hospital Auxiliary annual $100 bursary at a recent meeting held at the hospital. Lajoie had completed more than 50 hours in volunteer service at the hospital and will study nursing in Cornwall.

75 Years Ago
Area winners at Ottawa Gladioli Show
The Review, August 22, 1946 – OTTAWA – J. T. McDonald of Vankleek Hill won three prizes in the one-spike division of the Gladioli Show put on by the Ottawa and District Gladiolus Society at the Exhibition grounds in the city. McDonald presented gladioli of white, cream, blush white, pink with cream or yellow and a variety of others. In the two-spike division, R. Sherman of Hawkesbury won two prizes.

100 Years Ago
Rural mail driver gets three years for theft
The Review, August 19, 1921 – VANKLEEK HILL – For some time considerable money and money orders have been missing from a Rural Route coming to this office, with no less than five complaints received by the post office department. On Thursday last, two inspectors laid a trap by posting marked money in two decoy letters mailed to two Toronto mail-order houses. They hid until he picked up the letters and then came to the Vankleek Hill office to see if he had turned them in with his collections for the day. Upon finding he had not, the inspectors took out a search warrant and went to the man’s house, where the marked money was found. On Friday he appeared in court and was sentenced to three years in Kingston Penitentiary.

125 Years Ago
Horse and carriage swapped for bicycle
The Review, August 28, 1896 – VANKLEEK HILL – Quite a number from Vankleek Hill and surrounding district attended the ice cream social last Thursday evening. One young man drove out with a splendid horse and carriage and while he was engaged in discussing important topics with the fair ones, some disreputable character quietly appropriated his horse and rig, leaving a bicycle in its place, which the unfortunate carriage owner had to use to the best of his ability to make his way home.