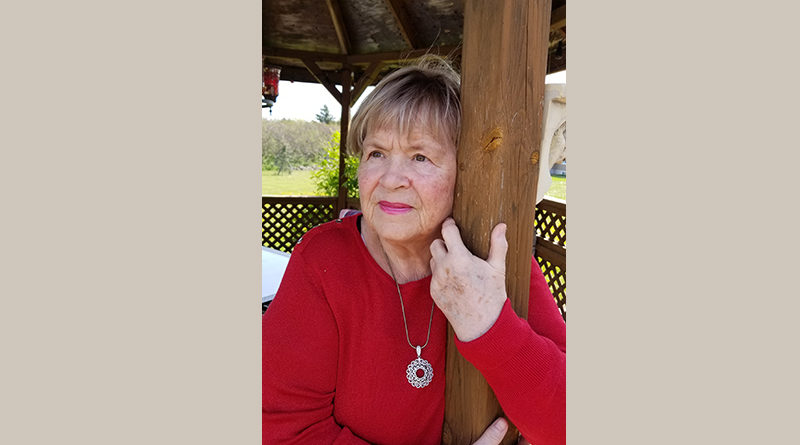 Local author Elaine 'Lana' Holmes says she writes every day. Her latest book is a series of poems–written in various styles– as she takes a look back at her life.

The title of ‘Riding Backwards on the Train’ – the second collection of works by L’Orignal poet and artist Elaine ‘Lana’ Holmes – has great meaning to the author, who shares with readers emotions from her past, present and future.

Separated into seven sections of poetry style – including lyrical and free verse, haiku, spoken word and ‘goonies’ – ‘Riding Backwards on the Train’ is a collection of poems that Holmes has been writing since she was a teenager. The collection includes poems she wrote half a century ago, as well as works the author was creating even as the book was heading to print.

“(The title) is really a metaphor for my life, because all of the stuff I’ve written is in the past,” says Holmes, who likens facing rearward while riding on a train to looking back at the past.

Two poems in particular relate to the title: the recent work ‘Tram 19’, which begins with the title phrase; and ‘Blur’, which the author wrote when she was 18 years old and includes the following excerpt:

“I cannot stand riding backwards on a train, because you’re leaving everything behind – it’s horrible,” says Holmes, who takes the train regularly when she travels to her native England. “I can go three or four hours without looking up, because I don’t want to see what I’m leaving behind.”

Born in Liverpool, England, the author’s family moved to Canada in 1958 when she was just 15.

“I came to Canada kicking and screaming,” recalls Holmes, who traveled back to her birthplace often prior to the COVID-19 pandemic.

While she has missed visiting her friends over the past two years, the energetic senior says the forced isolation also sparked her creative side. Holmes decided the time was right to release a second book as a follow up to her first work ‘Once-Wild Horses’, published in 2003.

“COVID itself made me sit down and do what I’ve been wanting to do for a long time,” relates the author. “I write every single day – I’m always writing.”

“Even as the book was being prepared I was still writing, so there is very current stuff in there.”

Included in the collection are works which the writer describes as ‘slam type’ (spoken word poetry). “The most recent, longer poems are under the lyrical section; they are really performing poems, meant to read to a group of people,” Holmes explains.

Also included is a mixture of lyrical poetry written over the years, many of which were published. The latter section of the book is Japanese style poetry, written in the English language.

The vast array of styles included in ‘Riding Backwards on the Train’ is a reflection of the eclectic author herself, who often wakes up with an image or complete line in her head that eventually will spark a poem.

“You never know – you wake up in the morning and it’s there,” says Holmes, who immediately jots down her ideas. “I wake up with my lines. I don’t question them, I just go – that’s my system.”

“At times a complete poem comes streaming in. Those I don’t change at all – ever.”

Anyone who meets the vibrant, exuberant Holmes might assume her poetry is all sweetness and light. But that is not the case, as the author’s work also references the many losses in her life.

“There were things that I was really hesitant to put in, because some of it is very bleak,” Holmes notes. “But at the same time, it’s my life and it’s part of riding backwards on that train.”

“What I tried to do is make the book like a playlist. Although it goes down, I get it to come back up again.”

The author prefers to look ahead with an optimistic view, noting that life is full of both good and bad times.

“I have a very, very full life, and I have a wonderful family. While I have had a lot of loss, I’ve had fabulous times, too.”

“I’ve seen and done a lot of stuff,” Holmes reflects quietly, before resuming her normal persona and bursting into laughter. “And I’m a really, really, silly person at times.”

‘Riding Backwards on The Train’ is available at The Review’s bookstore through the following link: https://reviewshop.ca/shop/riding-backwards-on-the-train/. You can also pick up a copy directly at The Review offices at 76 Main Street East in Vankleek Hill during regular business hours.