This Week in Local History – July 21, 2021 – The Review Archives – New golf course in VKH, Battle of Boyne in Laggan 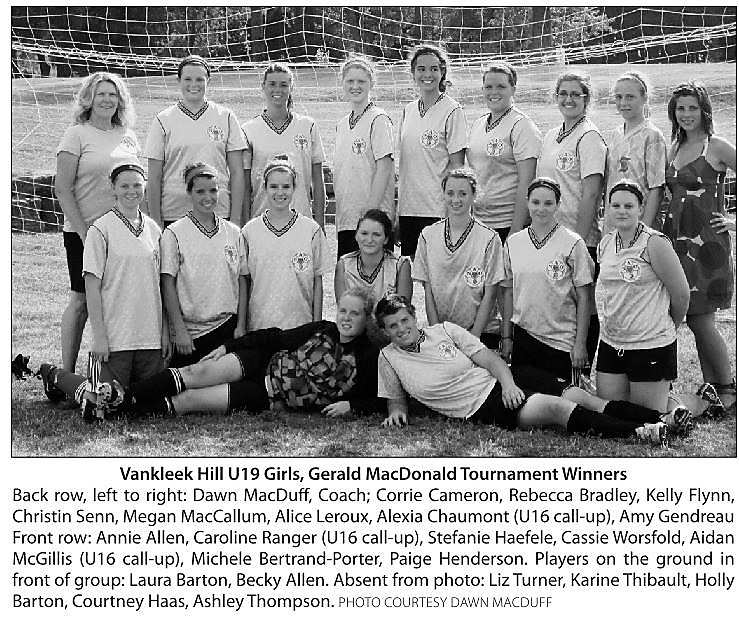 The Vankleek Hill U19 Girls after winning the Gerald MacDonald Tournament in 2011. Click on the photo to see it in full size with the original cutline.

10 Years ago
New golf course in Vankleek Hill
The Review, July 20, 2011 – VANKLEEK HILL – A nine-hole executive links golf course is on par to open at Hill Meadows Golf Club this weekend. The course was inspired by a Scottish-style design. Featuring tall grass, large rocks, trees and a number of obstacles, the course should offer a challenge to both novices and regular players.

25 Years Ago
Towns consider north-south divide
The Review, July 17, 1996 – HAWKESBURY – Shut out of municipal merger talks so far, Hawkesbury and Vankleek Hill officials are studying an amalgamation plan of their own. Under a scenario endorsed at a private informal meeting last week, the towns, along with four neighbouring municipalities, would be regrouped into two larger municipalities. The plan envisions a north-south divide, with Hawkesbury and Vankleek Hill serving as the centres of the two new municipalities.

50 Years Ago
Carillon Park opens
The Review, July 21, 1971 – ST-EUGENE – Carillon Provincial Park was officially opened and dedicated last Saturday by Lands and Forests Minister Rene Brunelle. The park is located 11 miles east of Hawkesbury near the Quebec border, north of the eastern end of the new 417 super highway now under construction. Planned for the future are a bird observation post, ski trails, snowmobile trails and snowshoeing trails.

75 Years Ago
Fire destroys home’s kitchen
The Review, July 18, 1946 – VANKLEEK HILL – Fire which started in the summer kitchen of the home of Arthur J. Martel, Main Street, while they were at supper at about 6 p.m. yesterday caused damage exceeding $3,000. The fire destroyed the kitchen adjoining the house and all its contents, including a new electric washing machine that had been recently purchased, along with the family’s winter clothing stored in the attic of the kitchen.

100 Years Ago
Enthusiastic demonstration at Laggan
The Review, July 22, 1921 – LAGGAN – On Tuesday of this week at Laggan, under the auspices of the Counties of Glengarry and Prescott, the 231st Anniversary of the Battle of the Boyne was celebrated. It is estimated upwards of 4,000 people were in attendance, many of whom were served dinner on the grounds. The celebration was held in Stewart Campbell’s grove, one mile north of Laggan, an ideal picnic ground.

125 Years Ago
Young men visit Barb
The Review, July 24, 1896 – PLEASANT CORNERS – A number of our young men wended their ways down to Barb last Wednesday evening to attend the social gathering there, and since their return their chief topic has been the warmth of their reception, especially from the young ladies and intent on making more frequent visits in the future.