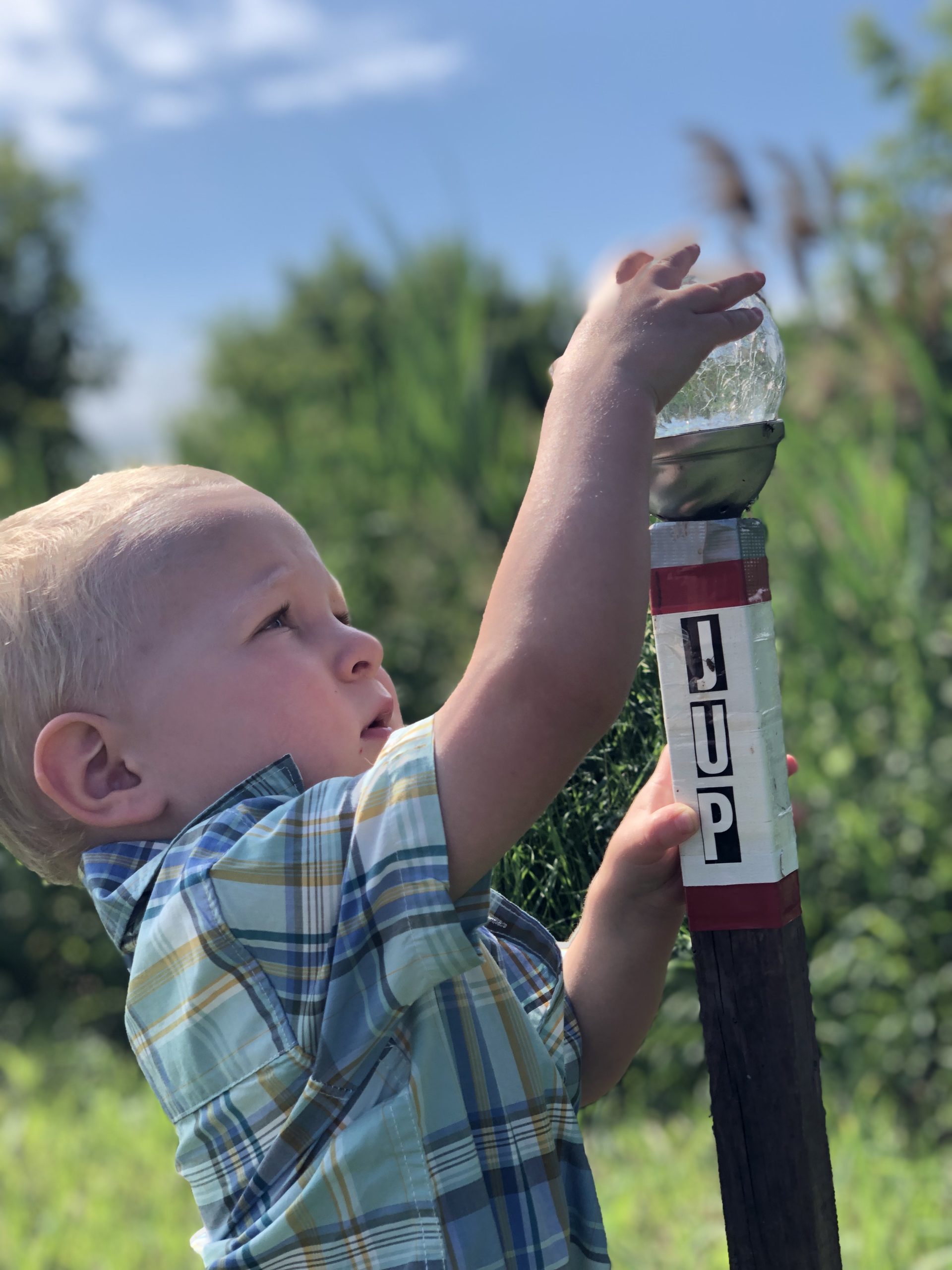 Written by Michel-André Lavergne, St-Bernardin, with the assistance of Leslie Howard and Margaret Benke

During the last few weeks, eight solar lamps, each one atop a small post, have appeared south-side along Concession Road 8 in St-Bernardin, here and there along five kilometres or so but not randomly. There was an underlying logic to the process. Actually, they represent a simple model of our planetary solar system … to scale!

Some of us may be familiar already with the solar system as represented below (middle frame). This ‘family photo’ of our solar system shows the heavenly bodies in correct order and size mostly as they would appear in space along the ecliptic (band in the sky across which the planets travel around the sun) in a west-to-east layout (as shown if we were to travel from the sun represented left or west, and then on, eastward, to the right.)

“But wait! you’ve forgotten Pluto, the ninth planet,” you might say. True, it’s not portrayed and here is why: Pluto’s classification as a planet has had a history of changes. Since 2006, per the International Astronomical Union’s planetary criteria, Pluto isn’t considered a planet because it hasn’t cleared the neighborhood around its orbit of other objects. However, it does meet IAU’s criteria for what constitutes a dwarf planet.” – says NASA.

So, back to our ‘family of planets’ picture, minus Pluto. For any photographer up in space to get all eight planets to bunch up together would be like trying to take a picture of any family with children running outside loosely in circles within a five-km yard and more … Right, impossible.

Now, to use vocabulary much in vogue these days, these planets have and always will respect “social distancing”. So, what would this distancing be like if put to scale on Concession

Road 8? Well, just like kids playing in their sandbox, my friend and I have marked and measured Concession Road 8 accordingly from our starting point: the Concession Road end-panel on Caledonia Road at its west extremity, representing the Sun as shown below.

Then, heading east and making our way from this panel, we put a small solar lamp to mark each spot where, at this scale, a planet would be found, each one in turn respecting the distance between them. Voilà! we get the following table:

For example, the frame on the right shows Jupiter, marked JUP on the post.

As we end this little walk-and-talk across our solar system, here are a few quick questions:

Now, in case you are still wondering about poor lil’ ol’ dwarf-planet Pluto, at this scale, please note that it would be found at its aphelic (most distant) point, in the vicinity of McCrimmon.

So, dear little stardust, better hop on your bicycle or on your feet if you want to experience a bit of the marvelous scale of the whole ‘solar system sandbox’ or, better yet, drive down Concession Road 8 after sundown and have a look yourself. Don’t forget to check the original idea out on YouTube at https://youtu.be/zR3Igc3Rhfg, The lamps will be removed before the winter solstice. 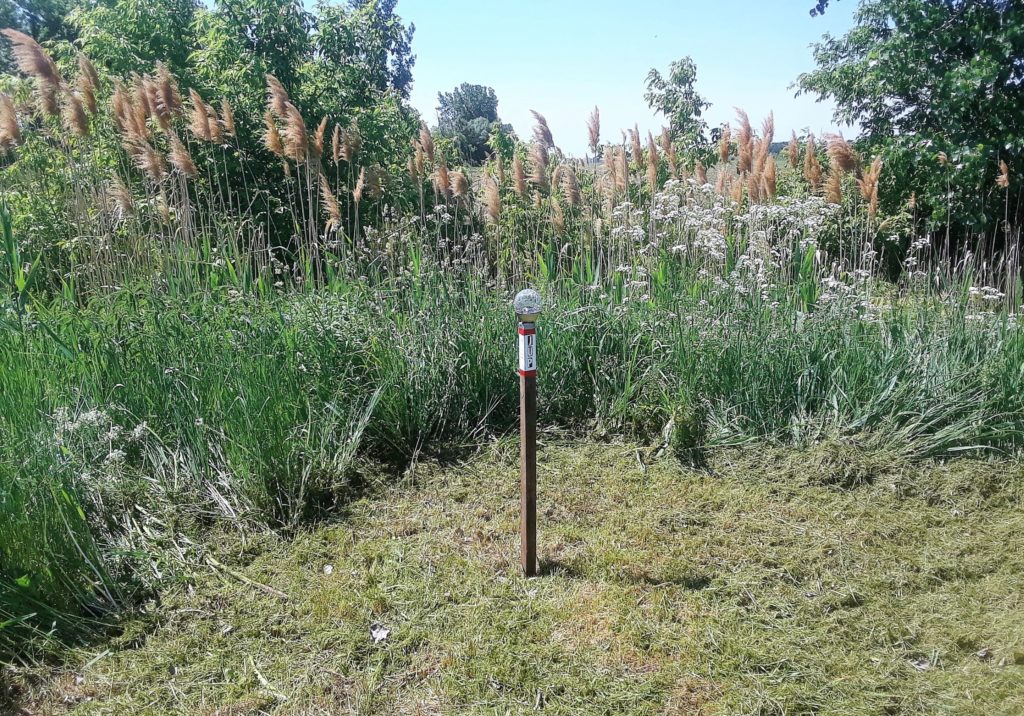 One of the lamps used in the St-Bernardin solar system project. 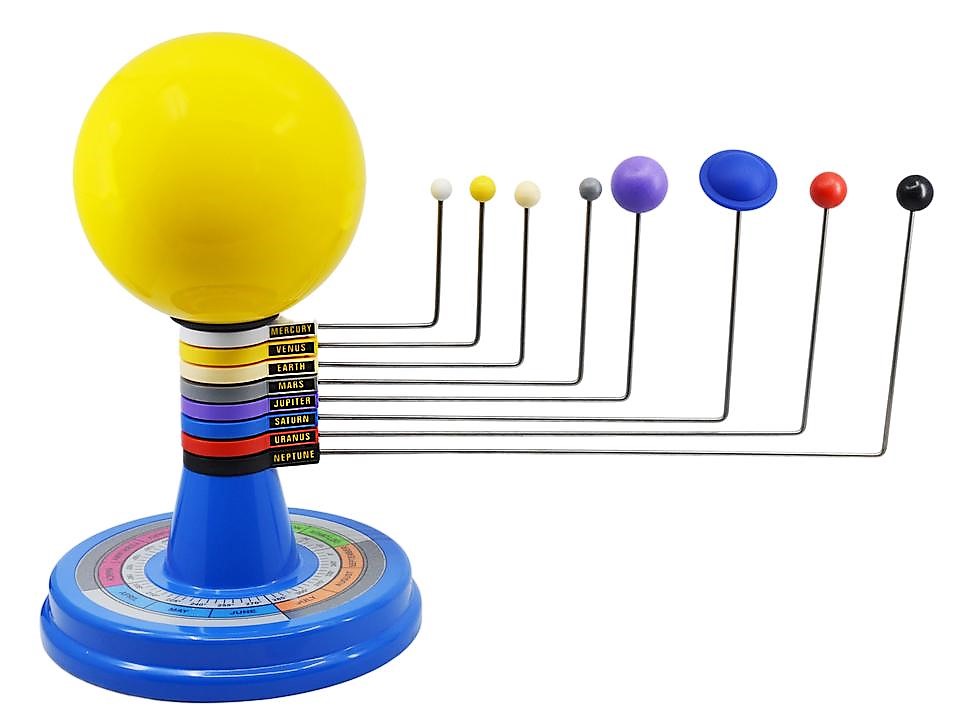 Model of our solar system. Photos compliments of Esico Scientific.