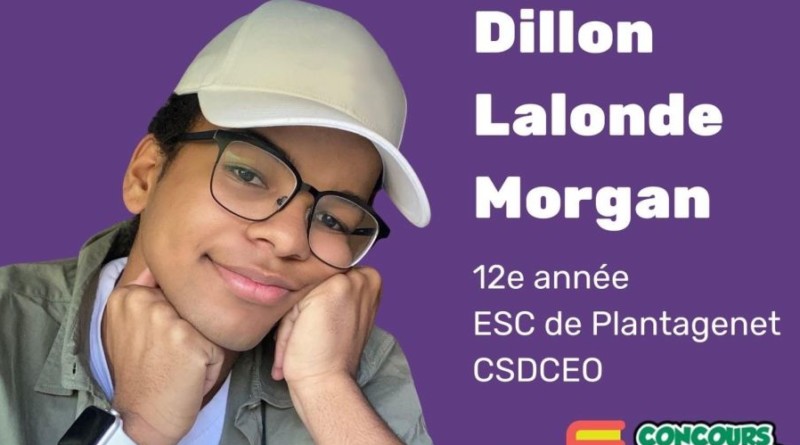 Dillon Lalonde-Morgan, a 12th-grade student from l’École secondaire catholique de Plantagenet (ESCP), had the last word during the LOL – Mort de rire Desjardins competition gala by being the big winner of the Ontario Provincial Final and the Favorite Prize, on Thursday June 23.

Lalonde-Morgan made everyone laugh by hinting at his driving prowess. To see its number, you can go to the Facebook page of the LOL Ontario contest at https://www.facebook.com/lolontario/ and you will find the link to part 2 of the provincial finals. He also won a $1,500-scholarship and a place in the contest tour with renowned comedians and other winners from previous years.

Lalonde-Morgan has more than one joke up his sleeve because he has been making his school community laugh since he started his time at ESCP either in his involvement in school or in his school TV spots. The LOL- Mort de rire Desjardins competition is a partnership with several francophone organizations including the CSDCEO and the regional ACFO.

The Plantagenet student and the other participants had the opportunity to be supported in their preparation with a coach/trainer. Not only did Dillon spend several weeks preparing his act, he also entered the contest more than once during his time at ESCP. Thanks to Mr. Nicolas Lacelle, theater teacher who guided Dillon well throughout his career.

The ESCP community is proud of Lalonde-Morgan and wishes him to make his audience laugh during the LOL – Mort de rire Desjardins competition tour. Dillon is part of ESCP’s 2021 graduating cohort.