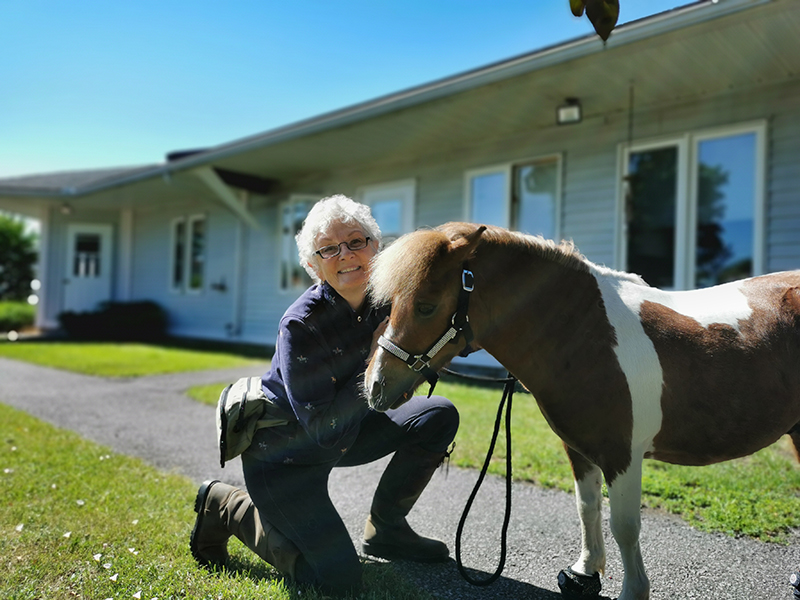 Dana Johnston is seen here with “His Nibs”, prior to a walkabout outside Heritage Lodge to meet residents. Photo: Louise Sproule

Talk about a journey. From being on a one-way trip to a meat plant, to being cherished by a new owner and now: offering joy where he can, a miniature horse called “His Nibs” is taking his new life in stride.

When a truck carrying two miniature horses pulled into the yard of the father of farrier Mackenzie Kunz several months ago, he took one look and told the driver to unload the miniature horses. There was no way they should be sent to a meat plant, he said. From there, it was a short journey to Rose Huxted’s farm, and that is where “His Nibs” was discovered by Vankleek Hill resident and horse enthusiast Dana Johnston.

She bought him and says that they have been learning together. Johnston loves to ride horses but had to set that love aside due to a hip replacement which left her feeling a little less confident about horseback riding. But her miniature horse has proven to be a new adventure, as she is learning about him, and when he reaches four years of age, she has plans to hitch him to a wooden cart and participate in parades and events. At age three, he is too young to be hitched to a cart; this is one case where the owner is definitely putting the horse (and its wellbeing) before the cart.

He has a bit of a belly, but that is normal for this type of horse, Johnston says, adding that he has lost 50 lbs. since she acquired him. He gets exercise regularly, she says and is receiving the best of care.

As His Nibs waited for a walkabout outside Vankleek Hill’s Heritage Lodge last week, his friendly whinny rang out as he stood in his dress “shoes”, which protect his feet from the hot pavement. The shoes will also protect the floors of the places he will visit as restrictions are reduced.

Johnston says that she enjoys her new friend’s soft and gentle disposition and knows that he will spread happiness wherever he goes as she grooms him into being a therapy horse. 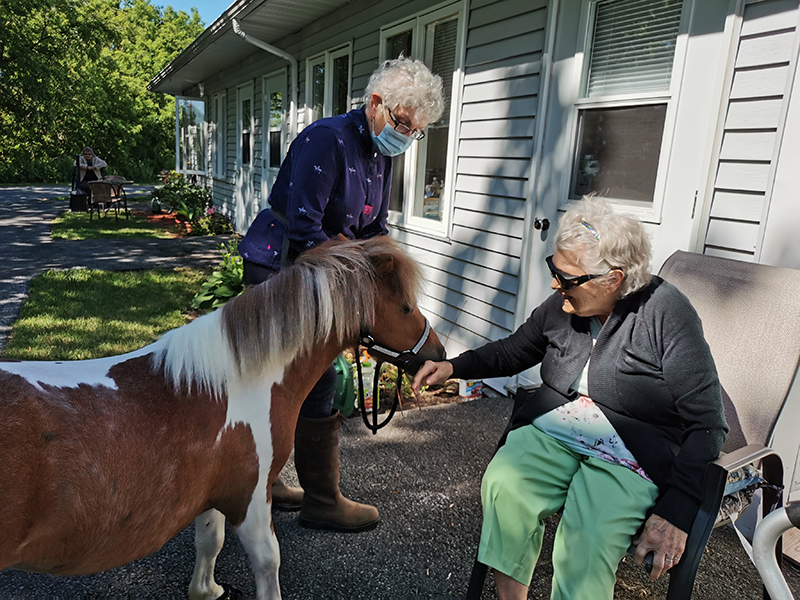 Exterior doors at each room at Vankleek Hill’s Heritage Lodge mean that residents can step outside for safe visits, such as this one from Dana Johnston, with “His Nibs,” her miniature horse.

A commercial cargo van is on order, so that she can fit the cart inside it, and there will be a dedicated space inside it for her horse. The van will enable her to get where she wants to go – bringing His Nibs along with her.