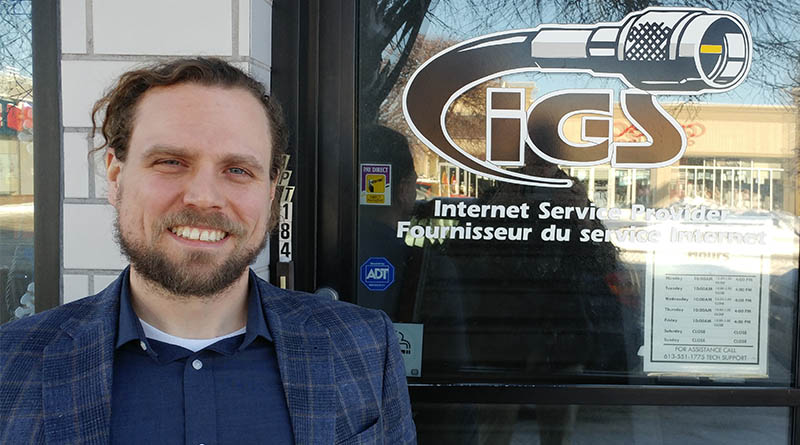 Jamie Bogue, President and co-owner of IGS Hawkesbury, said his jaw hit the floor when he learned the CRTC had scrapped a 2019 decision to lower wholesale internet rates. File photo

A recent decision by the Canadian Radio-television and Telecommunications Commission (CRTC) to scrap a 2019 decision to lower wholesale internet rates will mean higher prices for consumers in Eastern Ontario, says the president of IGS Hawkesbury.

“The decision is 100% going to mean higher internet rates for everyone in the area,” said Jamie Bogue, President, who is also co-owner of IGS.

In a decision announced on May 27, the CRTC said it would not implement lower wholesale rates it set two years ago. The 2019 decision provided lower rates for internet service providers (ISPs), many of which immediately lowered prices to their customers. The original ruling had been fought by large telecom companies such as Bell and Rogers.

IGS Hawkesbury did not lower rates after CRTC decision, and as such will not have to raise its prices in response to the current CRTC ruling, the company’s president said.

“We never lowered our rates to our customers like a lot of companies did,” Bogue said. “We wanted to see this whole process play out before we made any promises we couldn’t keep.”

Although IGS was waiting, expecting some aspects of the 2019 rates to be overturned, the company’s president said the decision by the CRTC to return to the higher wholesale rates established in 2016 came as a shock.

Major independent ISPs such as TekSavvy, VMedia, and Distributel are appealing the decision. TekSavvy has filed an appeal to cabinet and some companies are calling for CRTC chairman Ian Scott to be fired after the ruling.

“This is an unprecedented reversal by any tribunal in Canada,” said Alexei Tchernobrivets, CEO of Vmedia, in a press release. ”The decision raises serious doubts about the leadership and competence of the CRTC, and the integrity of its process, and sells out Canadians to benefit the dominant players. CRTC Chairman Ian Scott should resign, and Parliament should launch an immediate investigation into this incoherent outcome and whether political and corporate influence impacted this decision.”

The major carriers, including Bell and Rogers, say they are happy with the decision. The larger companies say the 2019 decision would have them selling below cost and would limit their ability to invest better service – particularly in rural areas

However the president of IGS – which serves Hawkesbury and the surrounding area including Vankleek Hill, Alfred, Plantagenet, Wendover, Rockland, St-Isidore, St-Eugene, Alexandria, Cornwall, as well as Grenville, and Lachute in Quebec – notes that smaller internet service providers are also critical to the development of better service in rural areas. For IGS, the decision means a planned project to expand the company’s service has been temporarily put on hold.

“We were supposed to get a retroactive payment going back to 2016 for Bell overcharging us for all these years and that was going directly into our own system to provide higher speeds at lower prices in the area. But if we’re not going to get the money that project has been more or less shelved for now.”