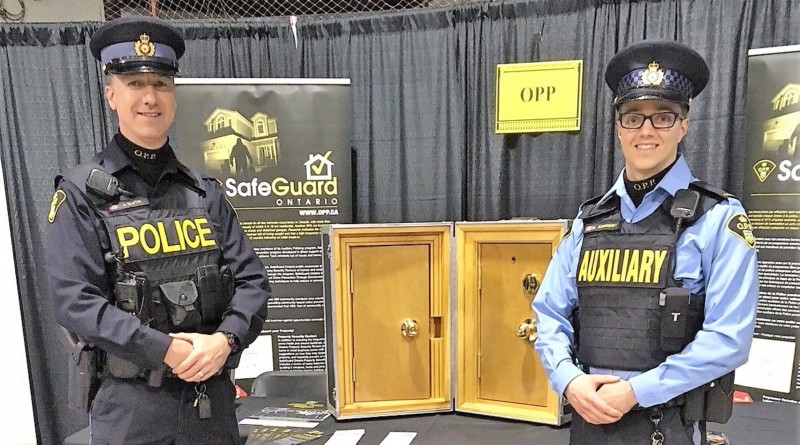 OPP Constable Mario Gratton (left) with former Auxiliary Constable Martin Kingsbury, who has since become a regular member of the Hawkesbury OPP. Joining the OPP Auxiliary allows members to make a difference in their community, as well as being an excellent way to step into policing.

The Hawkesbury Detachment of the Ontario Provincial Police (OPP) is putting a spotlight on the continued efforts of the Hawkesbury OPP Auxiliary Unit – a group of dedicated volunteers who work with regular force OPP officers to ensure safety and well-being for the Province of Ontario.

The local detachment is in the process of recruiting additional members for its auxiliary unit. Volunteering part-time with the Auxiliary Program is a great way to make a difference in your community says OPP Constable Kenneth Gray.

“It’s also a good way to step into policing for anyone who is interested,” Gray explains. “It’s a good introduction and gives you a better understanding of what policing is, because they do go around with the officers.”

Members are sent to the Orillia Provincial Police Academy for extensive training, after which they go on patrol with regular OPP officers. Auxiliary members do not carry firearms and are required to spend a minimum of 10 hours per month on patrol and meetings.

“This is voluntary, so they all have jobs or are in school,” Gray notes. “When they have free time they come out and help us out.”

The Hawkesbury detachment currently has four auxiliary members. Unit Commander Nicholas Musacchio has been with the Hawkesbury Auxuliary Unit since it was first started more than 20 years ago, while Auxiliary Sergeant Mark-André D’Aoust has been a volunteer in the community for nine years. Auxiliary Constable Sébastien Lalonde-Page has three years of service and Auxiliary Constable Alexandra Lebel has been a volunteer for one year.

To be eligible to become an OPP Auxiliary member, volunteers must meet the following qualifications:

– Ontario Secondary School Diploma (OSSD), or its equivalent (i.e. grade 12 from any province of Canada). Candidates who do not have a grade 12 diploma, but have completed a college diploma program or a university degree program will be considered as having a grade 12 diploma. Applicants educated outside Canada should refer to the Government of Canada – Education Assessment Resources.

– No criminal record for which a records suspension (pardon) has not been received or an absolute/conditional discharge that has not been sealed.

The best mattresses made in Canada