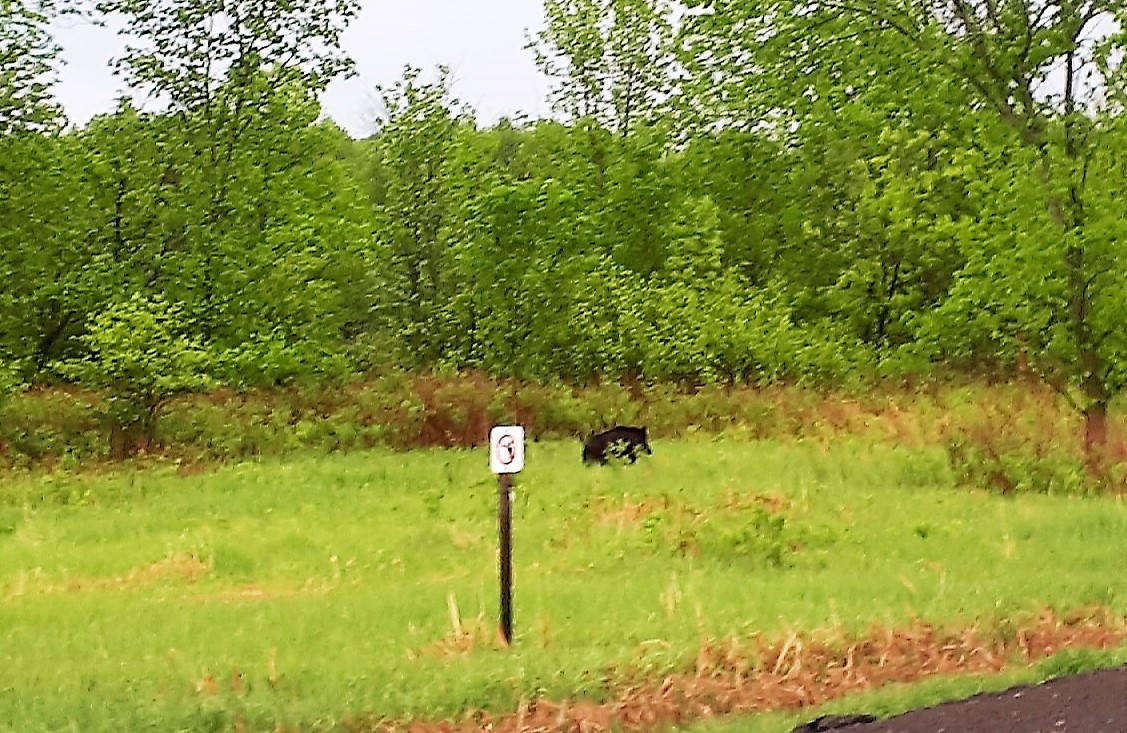 Alex Sandor Csank of Vankleek Hill took this photo of an apparent wild boar near Voyageur Provincial Park east of Hawkesbury on May 22.

A report of a wild pig spotted near Voyageur Provincial Park in East Hawkesbury is being investigated by the Ontario Ministry of Natural Resources and Forestry (MNRF), however officials note the animals are extremely rare in the region.

On May 22 Alex Sandor Csank and Diane Taylor were heading south along County Road 4 near the park after a picnic near Chute-à-Blondeau, when the Vankleek Hill couple spotted what they at first thought was a dog on the side of the roadway.

“My wife said ‘hey, look at that’ and there was a black figure,” Csank recalled. “As we were getting closer we realized it was pretty large – too big to be a dog – and it had a distinctive sort of gait of a pig.”

The large boar was approximately 50 metres from the roadway by the time Csank was able to stop his vehicle to take pictures.

“I shot several photos, but very few of them came out well, because it wasn’t really phone-camera ideal conditions,” said Csank, who estimated the animal to be between 300-400 pounds. “But if you look at the photos, you can tell what it is.”

The couple reported what they saw to staff at the front gate of Voyageur Park and also filed a report with the MNRF at [email protected] . Wildlife Landscape Ecology Research Scientist Dr. Erin Koen, of the Wildlife Research and Monitoring Section of the MNRF, confirmed the ministry is looking into the sighting, but noted wild pigs in the region are a rarity and most sightings turn out to be escaped domestic animals.

“Based on the reports MNRF has received thus far, it’s likely that there are small numbers of wild pigs scattered across southern, central, and eastern Ontario,” Koen explained. “These scattered reports do not indicate an established, breeding population of wild pigs in Ontario.”

While the exact type of pig in the photo had not been identified as of press time, the MNRF was planning to visit the area to investigate the sighting further. Koen said staff at the ministry prioritize the most concerning sightings for on the ground follow-up and are prepared to act if there is any evidence of wild pigs breeding and self-sustaining in Ontario. Anyone who believes they have seen a wild pig is advised to report it to [email protected] , note the date and location, and take a photo if possible.

There are no reports of attacks by wild pigs on people in Ontario, however in other jurisdictions wild pigs have been known to show aggressive behaviour towards people, livestock, and pets. Anyone who sees a wild pig is advised to keep their distance and call 911 or their local police if one exhibits threatening or aggressive behaviour.

Anyone seeking more information on wild pigs in Ontario can view the MNRF’s annual report on wild pig sightings through the following link: https://files.ontario.ca/mnrf-annual-report-on-invasive-wild-pig-sightings-2019-2020-en-2021-01-21.pdf .

The Ministry of Natural Resources and Forestry has also drafted Ontario’s Strategy to Address the Threat of Invasive Wild Pigs, which outlines a proactive approach by setting a goal to prevent the establishment of invasive wild pigs in the province. Members of the public can review and comment on the draft strategy until June 7, at the Environmental Registry of Ontario: https://ero.ontario.ca/notice/019-3468 .