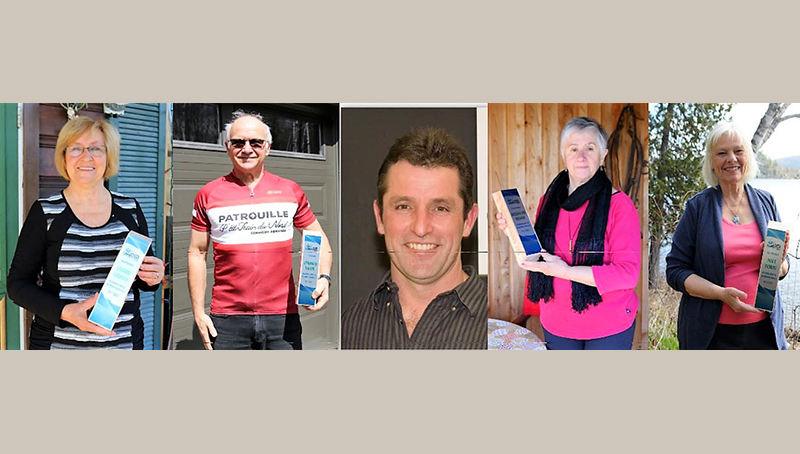 Five Argenteuil residents have been recognized by Loisirs Laurentides for their volunteer contributions. From left to right are: Liseanne Cadieux, Bernard Lortie, Guy Marineau, Jacqueline Richer and Janet Thomas.

As part of the festivities surrounding its 50th anniversary, Loisirs Laurentides is honoring 50 volunteers from the Saint-Jérôme region – including five from MRC d’Argenteuil.

Recognized by Loisirs Laurentide were the following volunteers from Argenteuil:

Liseanne Cadieux, Grenville-sur-la-Rouge – A volunteer for almost 40 years, Cadieux was vice-president of l’Association de Camping Caravaning du Québec, Laurentian section. She is one of the organizers and responsible for the volunteers during the Christmas tree counting. She was also a member of the board of directors of the Argenteuil West Sector Food Assistance Network.

Bernard Lortie, Gore – With 35 years of volunteer work, Lortie served as a coach and team leader at Vélo Québec’s provinicial events. Since 2006 he has been a patroller on the Parc linéaire Le P’tit Train du Nord.

Guy Marineau, Saint-André-d’Argenteuil – A dominant figure in weightlifting in the Laurentians, Marineau does not count the hours it takes to initiate his young athletes or supervise his national and international athletes. For 25 years, with his North Weightlifting Club, he has trained many athletes who have participated in the Quebec Games and in many provincial, national and international competitions.

Jacqueline Richer, Grenville-sur-la-Rouge – A volunteer for nearly 30 years, Richer coordinated the activities of the Maison des Arts in Bell Falls. She was responsible for the opening of the Halte camping des Chutes-des-Soeurs, in addition to having been the manager of the organization. Today she is a board member and spokesperson for the SOS GSLR committee.

Janet Thomas, Arundel – Thomas has been involved in organizing cultural events within her municipality for almost 15 years. She is the originator of the Arundel Arts Show, organized by Loisirs Arundel.

Argenteuil member of the legislature Agnès Grondin, who paid a tribute to the five volunteers from Argenteuil on her Facebook page, said she plans to call each to offer personal congratulations for their efforts.

“I want to thank them for giving their time – it so important,” Grondin told The Review. “Something every parent should do is teach their children to take the time to be volunteers.”

Located in Saint-Jérôme, Loisirs Laurentides’s mission is to mobilize, support and act as a facilitator with local, regional and national players in their individual and collective efforts aimed at promoting, enhancing and fostering the practice of leisure among citizens of the Laurentians.