Chickens as pets – owners in love with their feathered friends 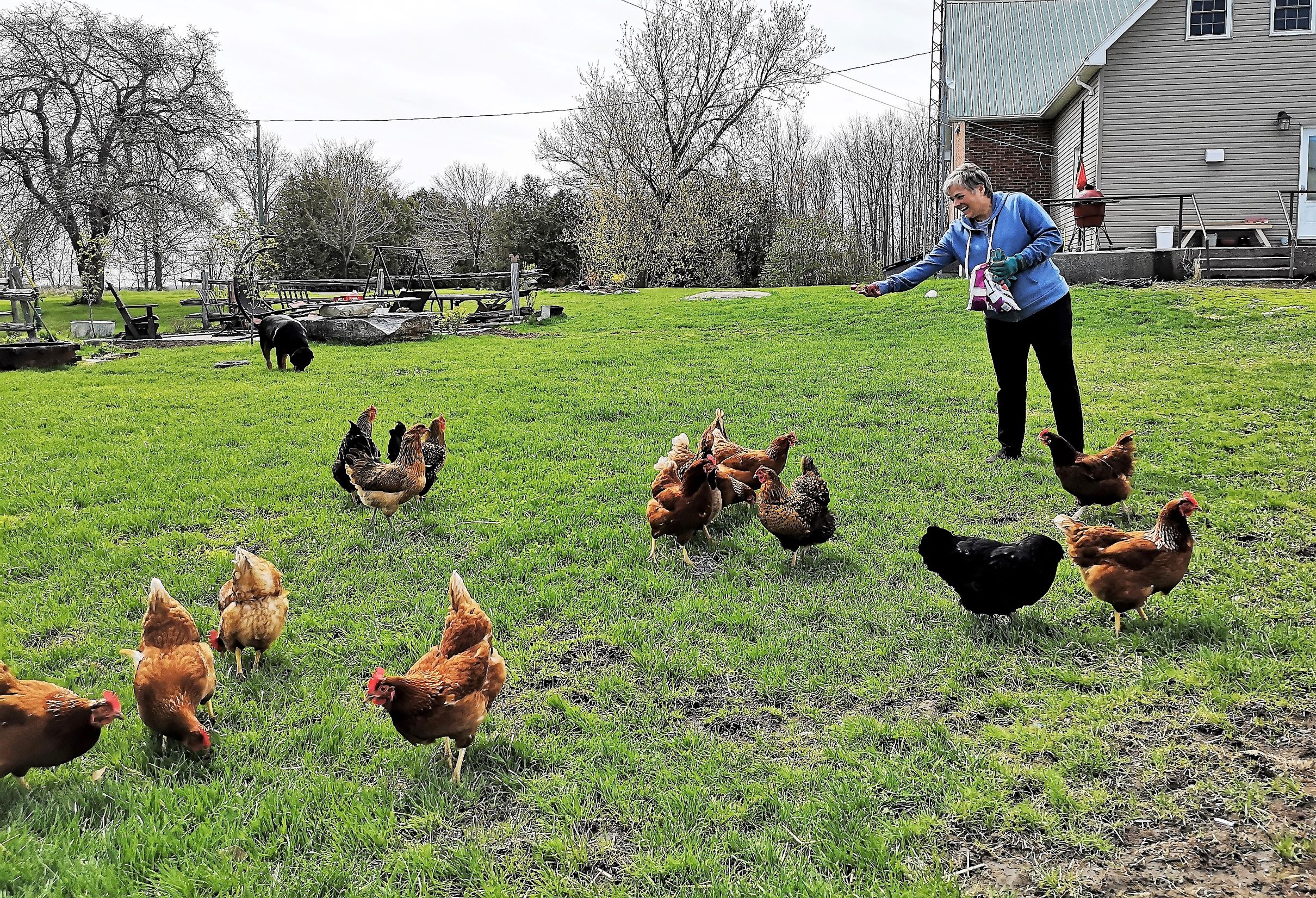 Susan Jaring’s love for raising chickens began four years ago when she asked her husband Eric for some Silkie chickens for her birthday. Photo by Reid Masson

It’s the age-old question – which came first, the chicken or the egg? If you ask people who raise them, it’s the chicken.

“About four years ago my husband asked me what I wanted for my birthday and I said: Silkie chickens,” says Susan Jaring, who now has about 80 birds of various breeds on the East Hawkesbury property where she lives with husband Eric. “They’re like chips – you can’t have just one.”

The Jarings’ home is on a 250-acre former dairy farm, located in a rural area of Champlain Township. The couple retired from farming six years ago, leaving the large barn empty. That provides Jaring with much more space than the average backyard chicken coop.

“For the winter, we created a coop in a rather large area (of the barn) and they have an outdoor coop in the summertime,” says Jaring of her pampered flock.

Jaring sells eggs out of her home to friends and family, and also raises chicks, which she either keeps or sells to other hobbyists. It’s not a business and there’s no profit to be made, as the cost of feed alone far outstrips any money that comes in. But the price of keeping her hens is well worth it, Jaring says, explaining the birds all have their own personalities.

“They’re not all named, but we do have some favorites,” Jaring chuckles, as the chickens follow her like puppies around the property – undeterred by the two large Rottweilers who act as their security detail. “We have a nice patio and we sit out there in the summertime and the chickens come around and jump on the picnic table and all over – it’s just nice to watch them.”

At the other end of the backyard-chicken-coop scale is East Hawkesbury resident Crystal Assaly, whose husband Simon Massie brought up the idea of raising chickens two years ago to a very lukewarm reception.

“Simon wanted chickens and I thought ‘bugs, pests – I don’t want to deal with it’,” recalls Assaly, who now has seven chickens living in a garden shed that the couple converted into a henhouse. “But really, I think they’ve become more my thing than his now – they’re like pets.”

A side benefit to the hobby has been the educational experience it has provided for Assaly’s 11-year-old son William, who loves caring for the birds.

“Will has learned so much – you know, eggs don’t just come from the grocery store,” Assaly says. “You have to work for them; you have to take care of your animals.”

The boy’s love for his feathered friends is obvious, as he works cleaning out the pen, feeding the birds and making sure they have fresh water. The chickens are clearly fond of William as well, with one in particular trailing him everywhere he goes.

“Jericho, I find is really attached to me,” William explains of his little buddy. “I like walking through the fields and he follows me.”

Regulations on keeping chickens on properties other than those designated as agricultural vary by municipality. In many townships, there are few restrictions in rural areas, however in most urban areas keeping chickens is forbidden. In Hawkesbury, for example, people are allowed to keep up to two chicks, but full grown birds are not allowed.

Another example is Champlain Township, where chickens are allowed in agriculturally zoned areas only and the property on which they are housed must be a minimum size of five acres. One should always check local regulations before deciding to set up a backyard chicken coop on their property.

The Ontario Food and Safety Act regulates the sale of eggs in the province and all must be inspected and graded before being sold. An exception is made for producers, who are allowed to sell ungraded eggs produced on the premises. Eggs can be sold only on the property where they are produced and must be clean and not leaking.

Back at the Jaring property, Susan shows some of the chicks in the incubation section of her barn. Nearby are some new arrivals; a trio of Jersey Giants – a large American chicken which is among the heaviest of all breeds. They’re new to the barn, still nervous, and not ready for their close-up, so a photo is out of the question – as is picking one up.

When their laying days are over, Jaring’s hens get to go into semi-retirement. They’re her pets, and whether they produce eggs or not is unimportant.

“Some are going on to four years old and at that point they just become pest control,” Jaring laughs. “I don’t have any earwigs in my yard.” 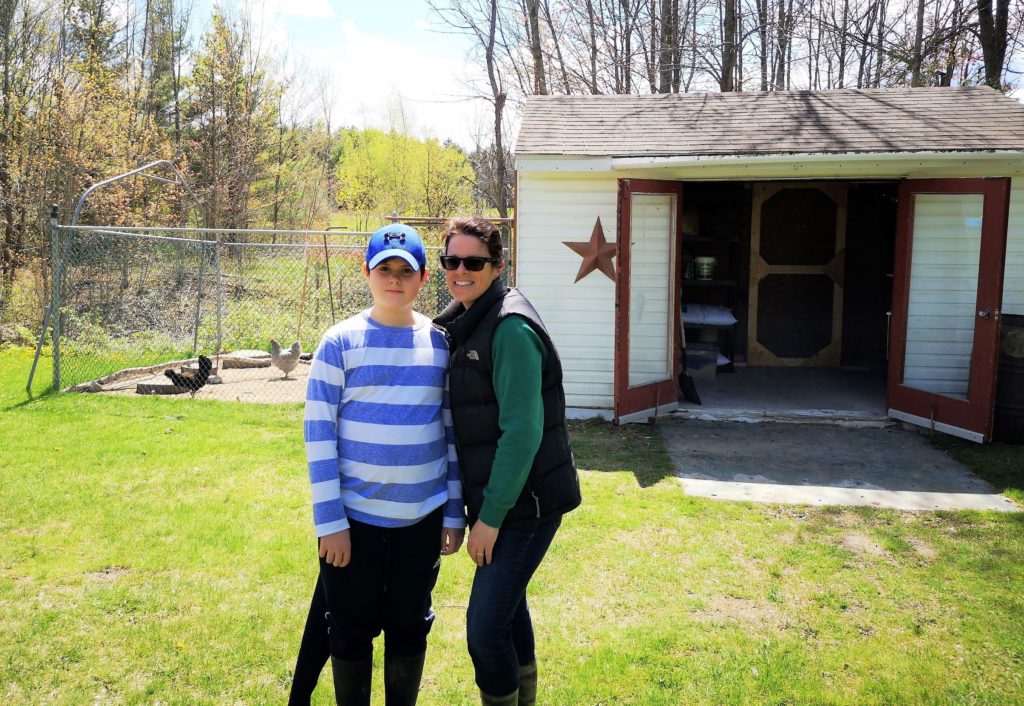 Crystal Assaly says raising chickens has been an amazing educational experience for her son William. Photo by Reid Masson 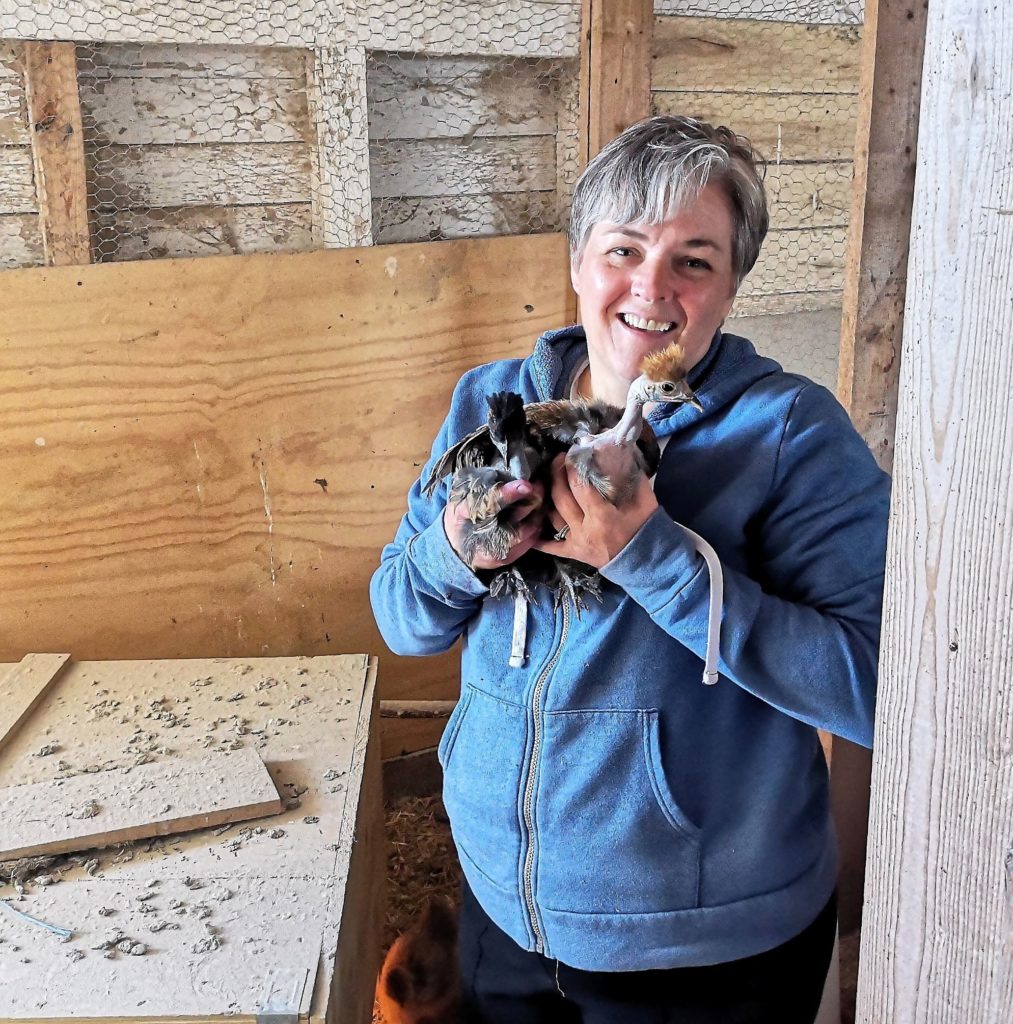 Susan Jaring with some exotic friends from her custom-built chicken nursery. Photo by Reid Masson