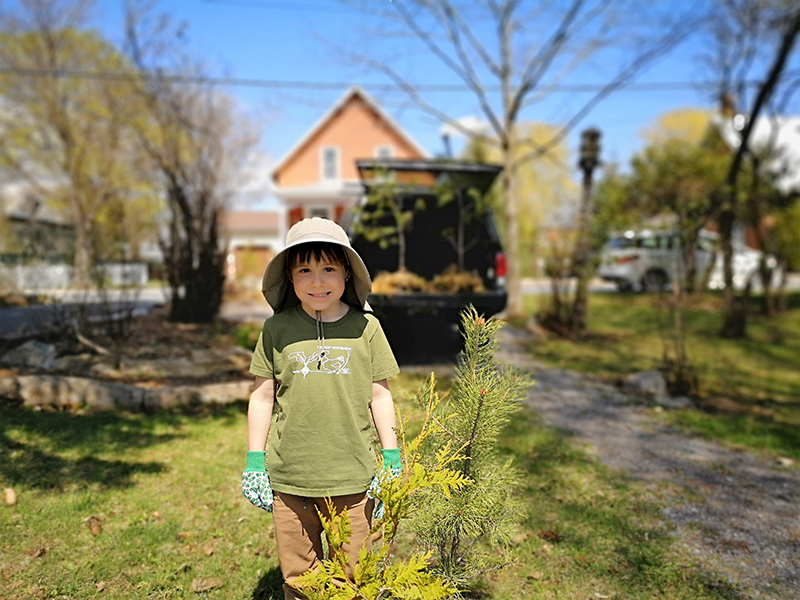 Seven-year-old Charlie Kazak is on a mission: to plant trees. The idea took root when he decided to enter The Review’s Earth Day Contest. Photo: Reid Masson

A booklet of ideas, a drawing of an ocean-cleaning machine, and a pledge to plant 10 trees in 2021 were the top entries in The Review’s Earth Day Contest. The contest’s judges were amazed by the great ideas submitted by youngsters who took part in the contest.

Three of the submissions stood out to the judges and were named winners of the three prizes available from Good Food Garden in Vankleek Hill, including Clara St-Cartier, who submitted her drawing of an ocean-cleaning machine.

Eight-year-old Freddie Kupferschmidt created a booklet containing all of his ideas about ways to save the planet. Freddie said he had too many ideas to submit just one and he felt they were all important.

Vankleek Hill’s Charlie Kazak, who is seven years old, is pledging to plant 10 trees in private or public spaces in Vankleek Hill this year. With help, he has started a Facebook group and recommends people visit Tree Canada treecanada.ca/ or OneTreePlanted onetreeplanted.org/ to find out how to get involved in planting more trees.

“I grew up in Dundas and a lot of people like trees and I grew to love the environment,” said Charlie, whose family moved to Vankleek Hill just a few months ago.

Charlie’s Facebook page www.facebook.com/CharliesTreesVKH has picked up more than 70 members. The young lad is also well on his way to planting 10 trees in Vankleek Hill in 2021, having already put four trees into the ground. Charlie was busy again this past Saturday, picking up five more small trees from donors, which he hopes to plant this week.

“He had this idea when he saw The Review contest in the newspaper. He said ‘We’ll plant more trees!’,” said Charlie’s mom Charlotte Winchester. “(Charlie) thought he could get the word out there to inspire people in Vankleek Hill and beyond.”

“It was basically a small thing and all of a sudden turned into a massive thing,” Charlie said.

Freddie, Charlie and Clare have each won a Gardening Bundle containing organic seed mix, seed packets, 12 Cowpots – all in a Root Pouch, which can be used as a planter. The bundles were provided courtesy of Good Food Garden www.goodfoodgarden.ca in Vankleek Hill.

Everyone who participated in The Review’s Earth Day Contest will also receive a packet of Early Russian Mammoth Sunflower seeds courtesy of Good Food Garden.