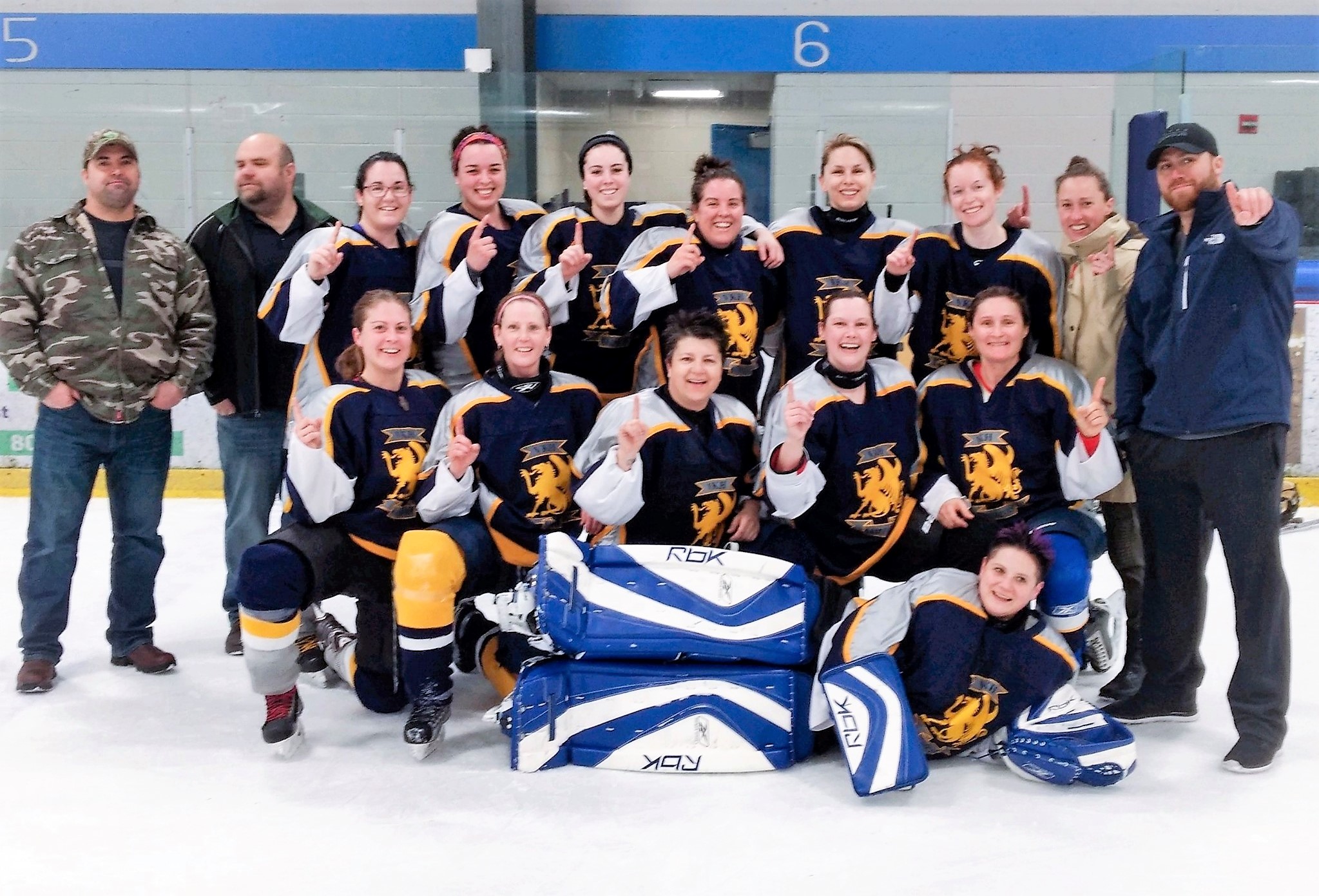 Vankleek Hill Gryphons players celebrate the team’s victory in the D Rec division at the 2019 Champlain Shootout women’s hockey tournament in Burlington, Vermont. The Gryphons are formed out of the women’s shinny games played on Friday nights in at the Vankleek Hill Community Centre.

Women’s hockey in Vankleek Hill is looking to grow in 2021. Organizers of the regular women’s hockey Friday night pickup games at the community centre are seeking more players to help form a league, which would begin play in September.

“There’s been a shinny league in Vankleek Hill for years,” explains Lee Clement, who is working to recruit more female players to help grow women’s hockey in the region. “We just want to make it a little more fun, and a little more competitive by growing it into an actual league.”

The current plan is to have four teams play in a round-robin format, followed by a season-ending tournament to determine the league champion. Clement is hoping to recruit 48 players, who would be split into four teams of 12. That number of players would also allow the league to continue play under a maximum 50-person bubble format, in the event COVID-19 regulations are still a factor once play starts up.

Women’s hockey is currently played on Friday nights from 9:30-10:30 p.m. at the Vankleek Hill Community Centre. The group generally has 20-22 players show up each week, who are then split into two teams for that night’s play.

Players from the pickup games have also each year formed an ‘all-star’ traveling team, known as the Vankleek Hill Gryphons, which plays at hockey tournaments throughout Ontario, Quebec and the northeast United States. As with other traveling sports teams, the Gryphons have not played since the start of the COVID-19 pandemic, and players are missing the competitive aspect of facing other teams.

“Some of the girls are really looking for some competition,” says Clement. “Shinny is fine, but it’s not the same as playing in a league.”

“It’s so much more fun when you have a real ref and a scorekeeper.”

If enough players can be found for a league, there would be an extra one-hour slot booked on Friday nights so that all four teams can play. Organizers are hoping play could begin in the fall for the 2021-2022 season, assuming COVID-19 rules allow for league sports play by then.

Vankleek Hill Women’s Hockey maintains a Facebook group page, which has more than 80 members, however most are not active players. In order to form a league, the number of active female hockey players in the area will have to more than double from its current level.

“Not everyone plays every week – some of them just spare,” notes the organizer of the current Friday-night pickup games. “I just want to see if there are women out there who would like to play on a regular basis.”

“We have to see if there are the numbers first. Then we can figure out teams.”

Like the current shinny play, women’s hockey in a league format is open to all sizes, skills and age levels.

“We’re looking for girls of all calibers,” Clement noted. “In our shinny league we have one lady who who is 66 – we have some who have played college hockey and people who are just beginning to play hockey.”

“We are just trying to get women in sports. It doesn’t matter how good they are or if they’re just starting out – it’s open to anybody who wants to play.”

Clement is also looking for sponsors who would like to help boost women’s hockey in Vankleek Hill. Assistance from sponsors would help league organizers pay for uniforms, equipment and ice time for the new league.

Anyone would would like to play organized women’s hockey in Vankleek Hill, sponsor a team, or who would just like more information on the current shinny league, can email Lee Clement at [email protected] .