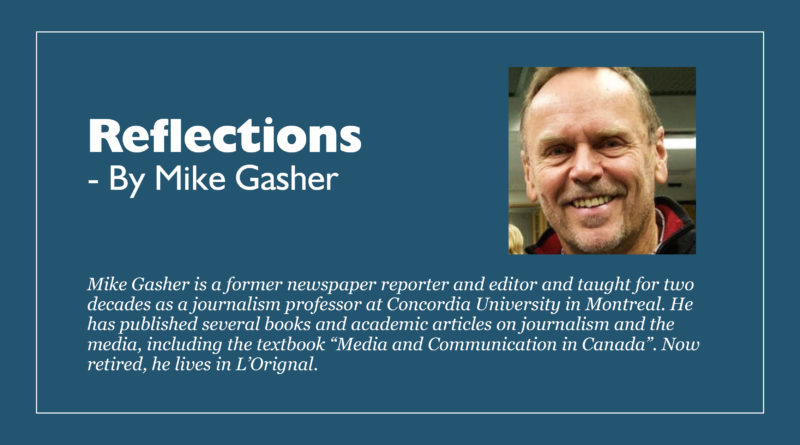 Everyone should work in a restaurant at least once. It would teach us a lot about the human condition – or, at least, some humans’ conditions.

We’d make a bit of money, sure, but we would also garner skills that would make us an attractive mate some day: cooking and dish-washing.

And I can pretty much guarantee that we’d all be better customers; we’d be much more respectful of the servers, and we’d tip more.

In what must have been a weak moment, my father decided to quit his union job with the telephone company — one year before qualifying for his company pension — to buy a general store and lunch counter in a small village called Hastings in south-central Ontario. He’d probably eaten in a restaurant before, but he’d certainly never owned one. To be fair, he and my mother turned out to be very good at it.

Hastings is a tourist town, quiet all winter, but bustling with cottagers, boaters, and pickerel fishers all summer. That meant my parents opened at 7 a.m., with the coffee pot on at 6:30, and they closed at 11 p.m., when they started to clean up, wash the floors, and, in those days, do the books by hand. Seven days a week. They wouldn’t get their gin and tonic until well after midnight.

They were much better at it than I was. Fourteen at the time, I was excited at first to ‘play store,’ especially with all that free access to pop, chips, chocolate bars, burgers, fries, ice cream – and the adult magazine rack.

And it was fun until I realized the hours involved, the work it entailed, and how much it strained the relationship between a know-it-all teenager and his parents. At one point, we agreed it would be better if I worked at the restaurant across the street.

I learned to cook, though. Short-order stuff, mostly, bacon and eggs, burgers and fries, with hundreds of cups of coffee poured all day long. Not to downplay the skills, and tolerance, required to make those meals, particularly when the customers are sitting at the counter a few feet away watching your every move and providing helpful tips. The kind of tips you don’t want.

I dreaded when a table of four wanted their eggs cooked four different ways. Sometimes they even got what they asked for. One customer who got more than he asked for was fortunate that my parents asked me to take over on a quiet winter night. We had a steak sandwich on the menu, but I’d never cooked one before, and wasn’t sure where to look for the meat when he ordered it. I looked in the fridge – instead of the freezer where the frozen ‘steak’ patties were — saw a nice thick sirloin, cooked it up, charged him, what, $3, and he left a happy man. When I proudly told my parents about it, they prayed he never returned.

In such a small town, we got to know all the regulars, and most of them were decent people. Not all. My mother is the sweetest woman in the world. But I’ll never forget the time one smart aleck stopped in for a coffee; he complained that the milk for his coffee was provided in a small metal jug, insisting bylaws required the milk to be served in its original container. My mother, probably 10 hours into her shift, responded brilliantly: “There isn’t room on the counter for a cow.”

I have to say, though, that some people just aren’t cut out for restaurant life. I learned that when I went to work for Art and Geraldine across the street; I should say I worked for Geraldine, and Art was just there, occasionally. Geraldine was a dynamo. She could do it all, powered by an ever-present beer and a cigarette at the back of the kitchen.

In the hectic summer months, Geraldine took one half-day off — Sunday morning, when the restaurant filled with people looking for a hearty late breakfast after their Saturday night shenanigans. This meant Art was at the grill. Whereas Geraldine could easily have a dozen eggs of different styles sizzling at the same time, along with bacon, sausages, ham, and several orders of toast, Art insisted on preparing one order at a time – in a restaurant with, what, eight tables! I can’t believe people kept coming back.

Let me end this little ode to restaurant work with a tip: leave a tip.

Québec to close border to Ontario traffic as of April 19